Certain modern scholars, notably Buddhologist Edward Conze (1966) and, following Conze, Elaine Pagels (1979), have proposed that similarities existed between Buddhism and Gnosticism, a term deriving from the name "Gnostics" given to a number of Christian sects by early Christian heresiologists.

An early suggestion of the connection of gnostic-theosophic teachings with Buddhism was the Saint Petersburg Tibetologist and Mongologist Isaac Jacob Schmidt's pamphlet „Über die Verwandtschaft der gnostisch-theosophischen Lehren mit den Religionssystemen des Orients, vorzüglich dem Buddhaismus" (Leipzig 1828) ("About the relationship of Gnostic theosophical teachings with religious systems of the East , especially Buddhism") .[1][2] This was developed by Edward Conze in his paper Buddhism and Gnosis presented to the Origins of gnosticism: colloquium of Messina, held 13–18 April 1966 - a seminal event in modern revision of scholarship on gnosis and gnosticism in Judaism and early Christianity. Conze noted that his starting point for Buddhism as the Mahayana Buddhism contemporary with the origins of Christianity. Conze noted that "This Buddhism I propose to compare with "Gnosis" rather than "the Gnostics," because the connotation of the latter term is still so uncertain that this Congress has been specially convened for the purpose of defining it." Conze's suggestion were supported and expanded by Elaine Pagels in The Gnostic Gospels (New York, 1979), and followed by appeals to Buddhist scholars to find evidence for contact between Buddhism and gnosticism.[3][4] Pagels' suggestion however has not gained academic acceptance or generated significant further study. Although the book was a bestseller Donald Akenson (2001) concludes that the success of the book was due to it being a message the American popular audience was ready to hear.[5]

Early 3rd-4th century Christian writers such as Hippolytus of Rome and Epiphanius write about a Scythianus, who visited India around 50 AD from where he brought "the doctrine of the Two Principles". According to these writers, Scythianus' pupil Terebinthus presented himself as a "Buddha" ("he called himself Buddas" Cyril of Jerusalem). Terebinthus went to Palestine and Judaea where he met the Apostles ("becoming known and condemned" Isaia),[6] and ultimately settled in Babylon, where he transmitted his teachings to Mani, thereby creating the foundation of what could be called Persian syncretic Buddhism, Manicheism. We find evidence that Buddhist thought had major influence on the teachings of Mani:

In the story of the Death of Mani:[7]

Following Mani's travels to the Kushan Empire (several religious paintings in Bamiyan are attributed to him) at the beginning of his proselytizing career, various Buddhist influences seem to have permeated Manichaeism:

Buddhist influences were significant in the formation of Mani's religious thought. The transmigration of souls became a Manichaean belief, and the quadripartite structure of the Manichaean community, divided between male and female monks (the "elect") and lay followers (the "hearers") who supported them, appears to be based on that of the Buddhist sangha.[8] 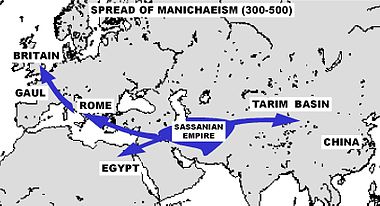 Manichaeism spread with extraordinary rapidity throughout both the east and west. It reached Rome through the apostle Psattiq by AD 280, who was also in Egypt in 244 and 251. The faith was flourishing in the Fayum area of Egypt in 290. Manichaean monasteries existed in Rome in 312 during the time of the Christian Pope Miltiades. By 354, Hilary of Poitiers wrote that the Manichaean faith was a significant force in southern France.

Also, in the Great Song of Mani (13th-14th century) Mani is many times referred to as Buddha Mani.

Theories of a possible Asian influence on the Jesus movement usually focused on the Essenes. Even orthodox scholars like Dean Mansel argued that Buddhist monks and missionaries had provided the inspiration for the monks and ascetics whom we find recorded in the Middle East before the coming of Jesus, like the Essenes and the related Egyptian sect of the Therapeutae. Some writers explored the idea that Jesus himself might have drawn on these esoteric traditions, as suggested by the title of Arthur Lillie's 1887 book Buddhism in Christendom, or, Jesus, the Essene. In 1880, Ernst von Bunsen argued that Christian messianic concepts derived from a common fund of tradition that was shared by Buddhists and Essenes. The Essenes, it was thought, provided a crucial link between Eastern mysticism and Western heresy, with Jesus as the pivot between the two trends. If Jesus had access to Buddhist ideas, and the Gnostic sects themselves preached reincarnation and other Asian themes, then once again this was evidence that Jesus' earliest teachings were best preserved among the so-called heresies.[9]

Elaine Pagels has written that "one need only listen to the words of the Gospel of Thomas to hear how it resonates with the Buddhist tradition... these ancient gospels tend to point beyond faith toward a path of solitary searching to find understanding, or gnosis." She suggests that there is an explicitly Indian influence in the Gospel of Thomas, perhaps via the Christian communities in southern India, the so-called Thomas Christians.

Some have suggested that of all of the Nag Hammadi texts, the Gospel of Thomas has the most similarities with Pure Land Buddhism. Edward Conze has suggested that Hindu or Buddhist tradition may well have influenced Gnosticism. He points out that Buddhists were in contact with the Thomas Christians.[10]

Early 3rd century–4th century Christian writers such as Hippolytus and Epiphanius write about a Scythianus, who visited India around 50 CE from where he brought four books and "the doctrine of the Two Principles", in which the early church fathers describe as assigning both "good" and "evil" to God. According to Cyril of Jerusalem, Scythianus' pupil Terebinthus presented himself as a "Buddha" ("He called himself Buddas").[11] Terebinthus went to Palestine and Judaea ("becoming known and condemned"), and ultimately settled in Babylon, where he transmitted his teachings to a woman who left his books to a young Mani, thereby creating the foundation of Manichaeism:

"But Terebinthus, his disciple in this wicked error, inherited his money and books and heresy, and came to Palestine, and becoming known and condemned in Judæa he resolved to pass into Persia: but lest he should be recognised there also by his name he changed it and called himself Buddas."

In the 3rd century, the Syrian writer and Christian Gnostic theologian Bar Daisan described his exchanges with the religious missions of holy men from India (Greek: Σαρμαναίοι, Sramanas), passing through Syria on their way to Elagabalus or another Severan dynasty Roman Emperor. His accounts were quoted by Porphyry (De abstin., iv, 17) [12] and Stobaeus (Eccles., iii, 56, 141).

Finally, from the 3rd century to the 12th century, some Gnostic religions such as Manichaeism, which combined Christian, Hebrew and Buddhist influences (Mani, the founder of the religion, resided for some time in Kushan lands), spread throughout the Old World, to Gaul and Great Britain in the West, and to China in the East. Some leading Christian theologians such as Augustine of Hippo were Manichaeans before converting to orthodox Christianity.

A number of scholars have stated that suggestions of an influence from Buddhism on Christianity is fanciful, without any historical basis and a form of Parallelomania.[13][14][15][16][17]

Notovitch's writings were immediately controversial. The German orientalist Max Müller corresponded with the Hemis monastery that Notovitch claimed to have visited and J. Archibald Douglas visited Hemis Monastery. Neither found any evidence that Notovich (much less Jesus) had even been there himself, so they rejected his claims.[19][20] Once his story had been re-examined by historians, Notovitch confessed to having fabricated the evidence.[21] Bart D. Ehrman states that "Today there is not a single recognized scholar on the planet who has any doubts about the matter. The entire story was invented by Notovitch, who earned a good deal of money and a substantial amount of notoriety for his hoax".[22]

A number of New Age or spiritualist authors have taken this information and have incorporated it into their own works. For example, in her book The Lost Years of Jesus: Documentary Evidence of Jesus' 17-Year Journey to the East, Elizabeth Clare Prophet asserts that Buddhist manuscripts provide evidence that Jesus traveled to India, Nepal, Ladakh and Tibet.[23]