Buddhism and Jainism are two branches of the śramaṇa tradition that still exist today. Mahavira and Gautama Buddha were contemporaries.[1] Jainism and Buddhism share many features, including much of the same terminology.

Jainism and Buddhism agree that release from the cycle of births and deaths can be accelerated through effort.[2]

Buddhism separates itself from the Jain tradition by teaching an alternative to Jain asceticism. Buddhist scriptures record that during Prince Siddhartha's ascetic life (before attaining enlightenment) he undertook many fasts, penances and austerities, the descriptions of which are elsewhere found only in the Jain tradition. In Majjhima Nikaya, Buddha shares his experience:[3]

These are in conformity with the conduct of a Digambara Jain monk. Ultimately, the Buddha abandoned reliance upon these methods on his discovery of a Middle Way.[4] In Jainism, there exists a non-extreme pathway for śrāvakas (lay practitioners) with minor vows. Some Buddhist teachings, principles, and terms used in Buddhism are identical to those of Jainism, but they may hold different or variant meanings for each.

Although both Buddhists and Jain had orders of nuns, Buddhist Pali texts record the Buddha saying that a woman has the ability to obtain nirvana in the dharma and Vinaya. According to Digambaras women are capable of spiritual progress but must be reborn as a man in order to attain final spiritual liberation. The religious texts of the Śvētāmbaras mention that liberation is attainable by both men and women.[5]

Buddhism has a similar organization: the community consists of renunciate bhikkhus and bhikkhunis and male and female laypersons, or śrāvakas and śrāvakīs, who take limited vows.

Whether or not it was an influence of Jain culture and philosophy in ancient Bihar that gave rise to Buddhism is unclear, but there are some striking similarities between the two traditions and Buddhism may have adopted many of its ideas and traditions from preexisting ones held by the Jains, including calendrical systems.

The ancient texts Ashokavadana and the Divyavadana mention that in one instance, a non-Buddhist in Pundravardhana drew a picture showing the Buddha bowing at the feet of Mahavira. On complaint from a Buddhist devotee, Ashoka, the Maurya Emperor, issued an order to arrest him, and subsequently, another order to kill all the Ājīvikas in Pundravardhana. Around 18,000 Ājīvikas were executed as a result of this order.[9] Sometime later, another ascetic in Pataliputra drew a similar picture. Ashoka burnt him and his entire family alive in their house.[10] He also announced an award of one dinara (silver coin) to anyone who brought him the head of a Jain. According to Ashokavadana, as a result of this order, his own brother, Vitashoka, was mistaken for a heretic and killed by a cowherd. Their ministers advised that "this is an example of the suffering that is being inflicted even on those who are free from desire" and that he "should guarantee the security of all beings". After this, Ashoka stopped giving orders for executions.[9]

According to K. T. S. Sarao and Benimadhab Barua, stories of persecutions of rival sects by Ashoka appear to be a clear fabrication arising out of sectarian propaganda.[10][11][12]

The Pāli Canon does not record that Mahavira and Gautama Buddha ever met, though instances of Mahavira's disciples questioning Gautama Buddha are to be found in various suttas. The Buddhists have always maintained that by the time the Buddha and Mahavira were alive, Jainism was already an entrenched faith and culture in the region. According to the Pāli Canon, Gautama was aware of Mahavira's existence as well as the communities of Jain monastics

Buddhist texts refer to Mahavira as Nigaṇṭha Jñātaputta.[13] Nigaṇṭha means "without knot, tie, or string" and Jñātaputta (son of Natas), referred to his clan of origin Jñāta or Naya (Prakrit).[14]

The five vows (non-injury, truth, non-attachment, non-thieving, celibacy/chastity) propounded by the 23rd Jain Tirthankara, Pārśva (877-777 BCE),[13] may have been the template for the Five Precepts of Buddhism. Additionally, the Buddhist Aṅguttaranikāya scripture quotes the independent philosopher Purana Kassapa, a sixth century BCE founder of a now-extinct order, as listing the "Nirgranthas" as one of the six major classifications of humanity.

Jain vegetarianism is required for both monastics and laity. In Buddhism, monks in China, Japan, Korea and Vietnam are vegetarian; however, strict vegetarianism is not required. By monastic tradition, a monk should eat whatever is placed in his bowl when receiving food. The exceptions not to eat given meat were if the monk knew an animal was killed especially for him or he heard the animal being killed. 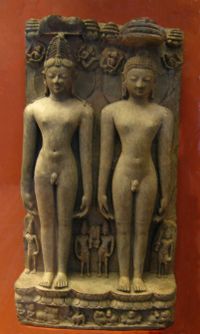 Sculpture of the two Jain tirthankaras Rishabha (left) and Mahavira (right). Photographed at the British Museum

Buddhist writings reflect that Jains had followers by the time the Buddha lived. Suggesting close correlations between the teachings of the Jains and the Buddha, the Majjhima Nikaya relates dialogues between the Buddha and several members of the "Nirgrantha community".[citation needed]

In many instances, both philosophies continue to share similar Prakrit terminology for important themes even though meaning may differ a bit, for example the term nirvana where its meaning is same in both the traditions but the state of nirvana described is somewhat different. The teachings may differ significantly in the interpretation. This method of teaching adopted by the Buddha points to the pragmatic aspect of his style of teaching wherein the Buddha uses words and terms that are familiar to the audience instead of introducing new and complex technical jargon. In this way, Buddhism sought to appeal to a broad audience.

Indian Buddhist tradition categorized all non-Buddhist schools of thought as pāsaṇḍa "heresy" (pasanda means to throw a noose or pasha—stemming from the doctrine that schools labelled as Pasanda foster views perceived as wrong because they are seen as having a tendency towards binding and ensnaring rather than freeing the mind). The difference between the schools of thought are outlined in the Samaññaphala Sutta[15] of the Digha Nikaya.

In Jainism, the way of liberation is the ford (tirtha), and Tirthankaras "those making the ford" (from samsara to moksha) are supreme teachers.[16]

Same concept is found in Buddhism which says that through enlightenment (bodhi) an individual crosses the river of samsara and attain liberation.

Both religions deny the existence of a creator god.[17] Buddha accepted the existance and extinction of World but it is Maya.Each individual should try to attain Nirvana break from Cycle of Birth and Death.

Jainism regards the existence of an eternal soul, whereas Buddhism denies it.[18]