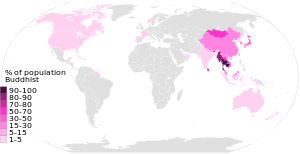 Percentage of Buddhists by country, according to the Pew Research Center.

China is the country with the largest population of Buddhists, approximately 244 million or 18.2% of its total population.[1] They are mostly followers of Chinese schools of Mahayana, making this the largest body of Buddhist traditions. Mahayana, also practiced in broader East Asia, is followed by over half of world Buddhists.[1]

The second largest body of Buddhist schools is Theravada, mostly followed in Southeast Asia.[1] The third and smallest body of schools, Vajrayana, is followed mostly in Tibet, the Himalayan region, Mongolia and parts of Russia,[1] but has been disseminated throughout the world.

According to a demographic analysis reported by Peter Harvey (2013):[3]

There are 10 countries with the highest Buddhist percentage: