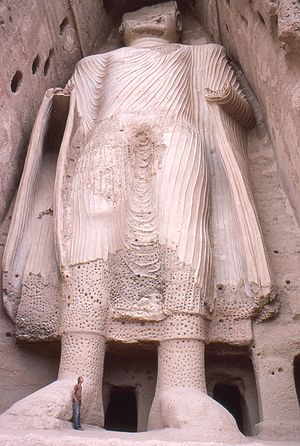 One of the Buddhas of Bamiyan 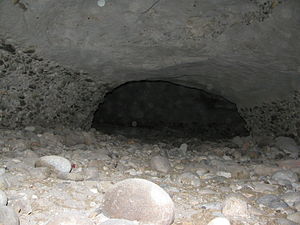 Buddhism was one of the major religions in Afghanistan during pre-Islamic era. The religion was widespread south of the Hindu Kush mountains. Buddhism first arrived in Afghanistan in 305 BCE when the Greek Seleucid Empire made an alliance with the Indian Maurya Empire. The resulting Greco-Buddhism flourished under the Greco-Bactrian Kingdom (250 BC-125 BC) and the later Indo-Greek Kingdom (180 BC - 10 CE) in modern northern Pakistan and Afghanistan. Greco-Buddhism reached its height under the Kushan Empire, which used the Greek alphabet to write its Bactrian language.

Numerous Buddhist monks were sent out, including Bodhidharma the founder of Zen Buddhism in China and legendary founder of Shaolin Kung Fu, Lokaksema (c. 178 CE), who travelled to the Chinese capital of Loyang and was the first translator of Mahayana Buddhist scriptures into Chinese,[1] and Mahadharmaraksita who, according to the Mahavamsa (Chap. XXIX[2]), led 30,000 Buddhist monks from "the Greek city of Alasandra" (Alexandria of the Caucasus, around 150 km north of today's Kabul in Afghanistan), to Sri Lanka for the dedication of the Great Stupa in Anuradhapura. The Greco-Bactrian King Menander I, (Pali) "Milinda," ruled (165 BC - 135 BC) was a renowned patron of Buddhism immortalized in the Buddhist text the Milinda Panha.

The religion started fading with the arrival of Islam in the 7th century but finally ended during the Ghaznavids in the 11th century.[3]

The territory within the borders of Afghanistan has seen many cultural and religious shifts over the centuries. The geographical position of the area between the Middle East, South Asian, and Central Asian cultures, and the proximity to the famous Silk Road (connecting East Asian and Mediterranean civilizations, and others in between), have been major drivers of local historical and cultural developments. One major influence was the conquest of the area by Alexander the Great, which incorporated the area for a time into the Hellenistic World, and resulted in a strong Hellenistic influence on Buddhist religious art in that region. In 305 BCE, the Seleucid Empire made an alliance with the Indian Maurya Empire. The Mauryans brought Buddhism from India and controlled the area south of the Hindu Kush until about 185 BCE when they were overthrown.

Alexander took these away from the Aryans and established settlements of his own, but Seleucus Nicator gave them to Sandrocottus (Chandragupta), upon terms of intermarriage and of receiving in exchange 500 elephants.[4]

At the time of these developments, most of the area belonged to the kingdoms of Bactria and Sogdiana. Many of the forebearers of the Pashtuns, including the Scythians, followed Buddhism until the arrival of Islam.

The Buddhist religion survived the Islamic conquest of Afghanistan by the Umayyads and rule by the Abbasid Caliphate. Buddhism in Afghanistan was effectively removed by the Saffarids, Ghaznavids, and Ghurids.[5][6] 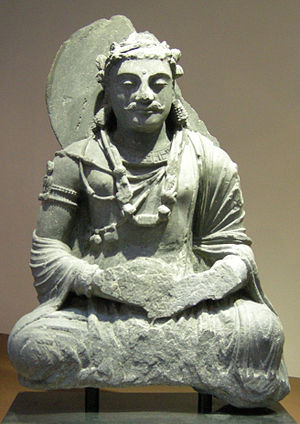 One of the early Buddhist schools, the Mahāsāṃghika-Lokottaravāda, were known to be prominent in the area of Bamiyan. The Chinese Buddhist monk Xuanzang visited a Lokottaravāda monastery in the 7th century CE, at Bamiyan, Afghanistan, and this monastery site has since been rediscovered by archaeologists.[7] Birchbark and palm leaf manuscripts of texts in this monastery's collection, including Mahāyāna sūtras, have been discovered at the site, and these are now located in the Schøyen Collection. Some manuscripts are in the Gāndhārī language and Kharoṣṭhī script, while others are in Sanskrit and written in forms of the Gupta script. Manuscripts and fragments that have survived from this monastery's collection include the following source texts:[7]

In August 2010, it was reported that approximately 42 Buddhist relics have been discovered in the Logar Province of Afghanistan, which is south of Kabul. Some of these items date back to the 2nd century according to Archaeologists. Some Buddhist sites were found in Ghazni.[8] The items in Logar include two Buddhist temples (Stupas), Buddha statues, frescos, silver and gold coins and precious beads.[9][10][11]

There is a temple, stupas, beautiful rooms, big and small statues, two with the length of seven and nine meters, colorful frescos ornamented with gold and some coins... Some of the relics date back to the fifth century (AD)... We have come across signs that there are items maybe going back to the era before Christ or prehistory... We need foreign assistance to preserve these and their expertise to help us with further excavations.[12]