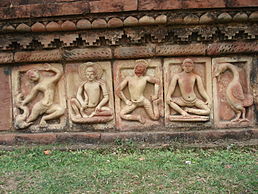 The Somapura Mahavihara is the oldest Buddhist institution in Bangladesh.

While it was the predominant faith of the region until about the 11th century, Buddhism is now the third largest religion in Bangladesh with about 0.7% of population adhering to Theravada Buddhism.[1] Over 65% of the Buddhist population is concentrated in the Chittagong Hill Tracts region, where Buddhism the predominant faith of the Chakma, Marma, Tanchangya and other Jumma people, while the remaining 35% of the population are from the Bengali Buddhist community. Buddhist communities are present in the urban centers of Bangladesh, particularly Chittagong and Dhaka.

As of 2014, followers of Buddhism are mainly people of Baruas living in Chittagong city, the business city of Bangladesh and indigenous Arakanese descent living in the sub-tropical Chittagong Hill Tracts. People who follow Buddhism in Bangladesh belong to the Barua people in majority with the percentage of 65% among the 0.07% population of Bangladesh, Chakma, Chak, Marma, Tanchangya and the Khyang, who had been since time in memorial have practiced Buddhism. Other tribal, notably those who practice Animism, have come under some Buddhist influence, and this is true in the case of the Khumi and the Mru, and to a lesser extent on the other tribals. 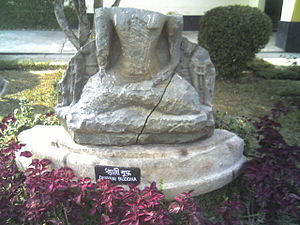 The earliest statue of Buddha found in Mahasthangarh

Legend said that Gautama Buddha came to the region to spread Buddhism, and it was speculated that one or two individuals became monks to follow his footsteps. However, Buddhism did not gain much support until under the reign of Asoka when Buddhism gained a toehold. The Pala Empire that control the Indian subcontinent spread many Buddhist ideologies in modern Bangladesh and builds many monasteries such as the Mahasthangarh and the Somapura Mahavihara. Also within the same Pala era, a famous preacher named Atisha who was born in the city of Bikrampur and spread Tibetan-Buddhism ideology.

Chandra Dynasty's Puranchandra and Subarnachandra adopted Buddhism, as did their successors Trailokyachandra and Srichandra who ruled Harikel and Chandradwip (Barisal.)[3] Khadga Dynasty were a Buddhist dynasty that carried the surname Bhatt. They made several temples and monasteries. For example, Raja Bhatta of the monarchy was a very committed Mahayanist Buddhist.[4]

Buddhism in various forms appears to have been prevalent at the time of the Turkish conquest in 1202.[5] The invading armies apparently found numerous monasteries, which they destroyed. With the destruction of its centers of learning such as Nalanda University, Buddhism rapidly disintegrated.[6] In subsequent centuries and up through the 1980s nearly all the remaining Buddhists lived in the region around Chittagong, which had not been entirely conquered until the time of the British Raj (1858-1947). In the Chittagong Hills, Buddhist tribes formed the majority of the population, and their religion appeared to be a mixture of tribal beliefs and Buddhist doctrines. According to the 1981 census, there were approximately 538,000 Buddhists in Bangladesh, representing less than 1 percent of the population. 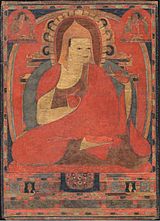 Atisha is one of the ancient priests from the Pala dynasty who is followed within the Bangladeshi Buddhist sects.

There are several monasteries in the Chittagong, and in most Buddhist villages there is a school (kyong) where boys live and learn to read Bengali (national language) and some Pali (an ancient Buddhist scriptural language).[5] It is common for men who have finished their schooling to return at regular intervals for periods of residence in the school. The local Buddhist shrine is often an important center of village life.

Buddhism outside the monastic retreats has absorbed and adapted indigenous popular creeds and beliefs of the regions to which it has spread.[5] In most areas religious ritual focuses on the image of the Buddha, and the major festivals observed by Buddhists in Bangladesh commemorate the important events of his life. Although doctrinal Buddhism rejects the worship of gods and preserves the memory of the Buddha as an enlightened man, popular Buddhism contains a pantheon of gods and lesser deities headed by the Buddha.

The Ministry of Religious Affairs provides assistance for the maintenance of Buddhist places of worship and relics.[5] The ancient monasteries at Paharpur (in Rajshahi Region) and Mainamati (in Comilla Region), dating from the seventh to ninth century A.D., are considered unique for their size and setting and are maintained as state-protected monuments.

Deputy secretary and above