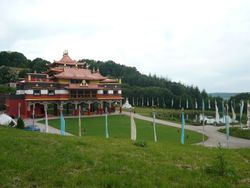 Buddhism is the fourth largest religion in France, after Christianity, Islam, and Judaism.

France has over two hundred Buddhist meditation centers, including about twenty sizable retreat centers in rural areas. The Buddhist population mainly consists of Chinese, Vietnamese, and Korean immigrants, with a substantial minority of native French converts and "sympathizers." The rising popularity of Buddhism in France has been the subject of considerable discussion in the French media and academy in recent years.

In the early 1990s, the French Buddhist Union (UBF, founded in 1986) estimated there to be 600,000 to 650,000 Buddhists in France, with 150,000 French converts among them.[1] In 1999, sociologist Frédéric Lenoir estimated there are 10,000 converts and up to 5 million "sympathizers," although other researchers have questioned these numbers.[2] A 1997 opinion poll counted as sympathizers young people who feel "an intellectual affinity with Buddhism or expressed a sympathy to a Buddhist worldview."[3]

Alexandra David-Néel was an important early French Buddhist. She is best known for her 1924 visit to the forbidden (to foreigners) city of Lhasa, capital of Tibet, and wrote more than 30 books about Buddhism, philosophy, and her travels. In 1911 Alexandra traveled to India, to further her study of Buddhism. She was invited to the royal monastery of Sikkim, where she met Maharaj Kumar (crown prince) Sidkeon Tulku. She became Sidkeong's "confidante and spiritual sister" (according to Ruth Middleton), and perhaps his lover (Foster & Foster). She also met the thirteenth Dalai Lama twice in 1912, and had the opportunity to ask him many questions about Buddhism—a feat unprecedented for a European woman at that time.

In the late 1960s and early 1970s, Buddhist teachers of various traditions began to visit France, as detailed below.

Taisen Deshimaru was a Japanese Zen Buddhist who founded numerous zendos in France. Thich Nhat Hanh Vietnamese-born Zen Buddhist nominated for the Nobel Peace Prize by Martin Luther King, founded the Unified Buddhist Church (Eglise Bouddhique Unifiée) in France in 1969. Plum Village, a monastery and retreat center in the Dordogne in southern France, is his residence and the headquarters of his international sangha. 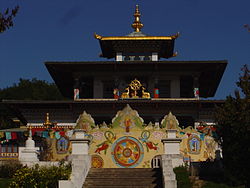 Temple of One Thousand Buddhas, in La Boulaye, Saône-et-Loire, Burgundy.

By the late 1990s, it has been estimated that there are more than 140 Tibetan Buddhist meditation centers in France. The first Tibetan Buddhist communities in France were established in the early 1970s. The highest-ranking head of schools to reside in France, H.E. Phendé Khenchen, established his temple of E Wam Phendé Ling in 1973. He is of the Ngor school of Buddhism. Buddhism in France's growth was catalyzed by visits, in 1973 and 1974 respectively, of the Karmapa and Dalai Lama, two of the highest lamas. In 1975, Dudjom Rinpoche and Dilgo Khyentse Rinpoche, also very high lamas, visited Dordogne, where they established retreat centers with the help of Pema Wangyal Rinpoche. Pema Wangyal Rinpoche is the son of Kangyur Rinpoche, another high lama who was among the first to take western disciples.

Kalu Rinpoche, also a highly esteemed lama, led the first tradition three-year retreat for westerners in France starting in 1976. In the Kagyu lineage such retreats confer the title "lama" on those who complete them. It is estimated that sixty percent of the centers and monasteries in France are affiliated with the Kagyu school.[1]

There are about twenty retreat centres representing all the different schools as well as many town-based centres which are under the direction of great Tibetan Buddhist masters.[4] Dhagpo Kundreul Ling in Auvergne is said to be the biggest Buddhist monastery outside of Asia.[citation needed]

Some of the larger retreat centers are:

Monasticism has traditionally been the bedrock of Tibetan Buddhism, but there were only a few dozen ordained French monks and nuns until the mid-1990s. However, there are now at least 300, most of whom were trained at the two monasteries in Auvergne.[5]

The most famous French monk in the Tibetan Buddhist tradition is Matthieu Ricard, a longtime student of Dilgo Khyenste Rinpoche who is the son of famous philosopher Jean-Francois Revel. He has published books on Buddhism which have contributed to interest in Buddhism and French Buddhists among the intelligentsia.

"Wisdom of Buddhism", a weekly French TV program, draws about 250,000 viewers, according to the Buddhist Union of France.[5]

Philosopher Luc Ferry, appointed Minister of Youth and Education in 2002, published an article in Le Point magazine in which he asked, "Why this Buddhist wave? And why particularly in France, a very Catholic country in the past? ... In this time of de-Christianization, Buddhism has furnished to the West a rich and interesting alternative."[5]