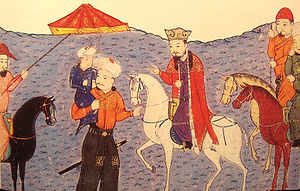 Mongol rulers Arghun and Abaqa were Buddhists. From the 14th century Universal History by Rashid-al-Din Hamadani.

Buddhism in Iran dates back to the 2nd century AD, when Parthians such as An Shigao, were active in spreading Buddhism in China. Many of the earliest translators of Buddhist literature into Chinese were from Parthia and other kingdoms linked with present-day Iran.[1]

Buddhists were persecuted during the Sasanid rule in the vast territory they ruled, as they made Zoroastrianism the state religion in 224 AD, and thereafter burned many Buddhist sites in the regions where it was practised, namely Central Asia. Surviving Buddhist sites in the easternmost Sassanian territories comprising modern day Central Asia were later raided in the 5th century by the White Huns.[2]

At the time of the Arab conquests in the mid-7th century, much of the eastern Iranian world was mainly Buddhist. Afghanistan is rich in Buddhist sites; others have been found in Turkmenistan, Uzbekistan, Tajikistan, and within Iran itself.[3] The Arab conquests brought the final demise of Buddhism in Eastern Iran and Afghanistan, although in some sites like Bamiyan and Hadda it survived until the 8th or 9th century.[2]

Mongol ruler Ghazan, who received Buddhist education in his youth, converted to Islam in 1295 AD and made it the state religion of the Ilkhanate.[4] He also prohibited the practice of Buddhism, but allowed monks to go into exile into neighboring Buddhist regions.[5]

In recent years, as part of the post-revolution period. Buddhist ideas and practice, as part of a broader reemergence of various faiths in Iran, has experienced an upsurge of interest among Iranians. Some of the poetry of Sohrab Sepehri shows Buddhist influence, and another major contemporary poet, Ahmad Shamlou, translated a book of Japanese haiku poetry into Persian.[6]