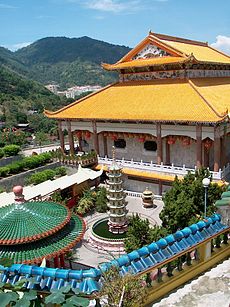 Kek Lok Si, or "Temple of Sukhāvatī", in Penang, Malaysia

Buddhism is the second largest religion in Malaysia, after Islam, with 19.2% of Malaysia's population being Buddhist although some estimates put that figure up to 21.6% when combined with Chinese religions.[1] Buddhism in Malaysia is mainly practised by the ethnic Malaysian Chinese but, there also Malaysian Sri Lankans that practice Buddhism such as Ananda Krishnan and K. Sri Dhammananda and a sizeable Malaysian Indian community. 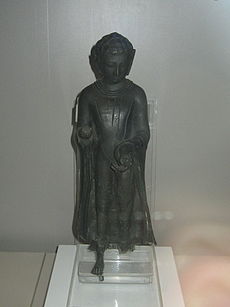 Standing Buddha statue made from brass, found in a tin mine in Pengkalan Pegoh, Ipoh, Perak in 1931.

Buddhism was introduced to the Malays and also to the people of the Malay Archipelago as early as 200 BC. Chinese written sources indicated that some 30 small Indianised states rose and fell in the Malay Peninsula. Malay-Buddhism began when Indian traders and priests traveling the maritime routes and brought with them Indian concepts of religion, government, and the arts. For many centuries the peoples of the region, especially the royal courts, synthesised Indian and indigenous ideas including Hinduism and Mahayana Buddhism and that shaped their political and cultural patterns. [1] However, the Malay Kedah Kingdom denounced Indian religion after the king of Chola from Tamil Nadu attacked them in the early 11th century. The king of Kedah, Phra Ong Mahawangsa, was the first Malay ruler to denounce the traditional Indian religion; he converted to Islam, and in the 15th century, during the golden age of the Malacca Sultanate, the majority of Malays converted to Islam. 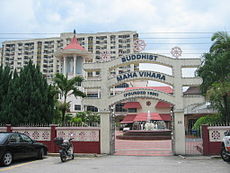 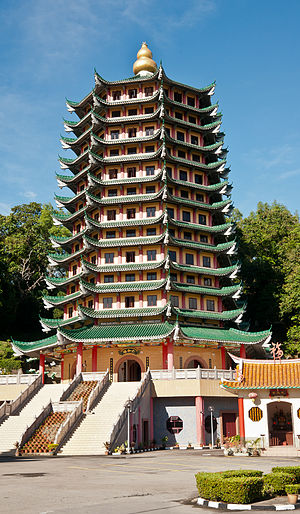 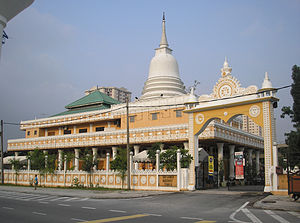 According to the Malaysian constitution, the majority ethnic group, the Malays, are legally defined as Muslim. They constitute 60% of the population, with the remainder consisting mostly of Chinese, who are generally Buddhists or Christians, and to the lesser extent Indians, who are generally Hindus. There are also smaller numbers of other indigenous and immigrants; among the latter are Malaysians of Sinhalese, Thai, and Eurasian origin. Nearly all of the Buddhists in Malaysia live in urban areas, since they are mostly engaged in business or employed in various professions.

Recently, a number of Malaysian Buddhist leaders have responded to the decline in religious participation by the children of Buddhist families, have attempted to reformulate their message to address modern life more directly. Groups involved in these education efforts include the Buddhist Missionary Society. Missionary Society leaders have argued that, while many educated youths seek an intellectual approach to Buddhism, an equally large number of people prefer to approach the religion through the tradition of ceremony and symbolism. In response to these needs, religious practices are carried out, but in a way that is simple and dignified, removing what can be seen as superstition. Efforts are made to explain why sutras are chanted, lamps lit, flowers offered, and so on.

As a religion without a supreme head to direct its development, Buddhism is practised in various forms, which, although rarely in open conflict, can sometimes lead to confusion among Buddhists. In Malaysia, some ecumenical moves have been made to coordinate the activities of different types of Buddhists. One example is the formation of the Joint Wesak Celebrations Committee of the temples in Kuala Lumpur and Selangor, which coordinates the celebration of Wesak, a holiday commemorating the birth of the Buddha. An initiative has also begun to form a Malaysian Buddhist Council, representing the various sects of Buddhism in the country to extend the work of the development of Buddhism, especially in giving contemporary relevance to the practise of the religion, as well as to promote solidarity among Buddhists in general.

In 2013, a video of a group of Buddhist practitioner from Singapore conducting religious ceremonies in a surau had become viral on Facebook. Malaysian police have arrested a resort owner after he allowed 13 Buddhists to use a Muslim prayer room(surau) for their meditation at Kota Tinggi, Johor.[2] The incident has been a frown upon Muslims in Malaysia. It has also become a hot topic in the social media. Following up at 28 August 2013, the controversial prayer room was demolished by the resort management within 21 days from the date of receipt of the notice after much protests by the residents of Kota Tinggi.[3][4] At the time, Syed Ahmad Salim, the resort owner explained that he had allowed the group of Buddhists to use the surau for a meditation session as he was unaware that it was an offence. [5]

According to the 2010 Census, 5,620,483 people or 19.8% of the population identify themselves as Buddhists. Most Chinese Malaysian follow a combination of Buddhism, Taoism, Confucianism and ancestor-worship but, when pressed to specify their religion, will identify themselves as Buddhists. As a result, 83.6% of all the Chinese Malaysian self-identifying as Buddhist. Information collected in the census based on respondent's answer and did not refer to any official document.

By gender and ethnic group