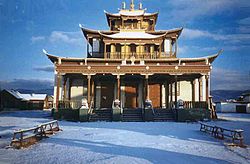 Areas in Russia with a Buddhist majority.

Historically, Buddhism was incorporated into Russian lands in the early 17th century.[1][2] Buddhism is considered as one of Russia’s traditional religions, legally a part of Russian historical heritage.[3] Besides the historical monastic traditions of Buryatia, Kalmykia and Tuva, Buddhism is now widespread all over Russia, with many ethnic Russian converts.[4]

The main form of Buddhism in Russia is the Gelukpa school of Tibetan Buddhism, with other Tibetan schools as minorities.[5] Although Tibetan Buddhism is most often associated with Tibet, it spread into Mongolia, and via Mongolia into Russia.[1]

It primarily spread into the Russian constituent regions geographically and /or culturally adjacent to Mongolia, or inhabited by Mongolian ethnic groups: Buryatia, Zabaykalsky Krai, Tuva, and Kalmykia, the latter being the only Buddhist region in Europe, located to the north of the Caucasus. By 1887, there were already 29 publishing houses[1] and numerous datsans.[1] After the Russian Revolution, the datsans were closed down.[6] By the 1930s, Buddhists were suffering more than any other religious community in the Soviet Union[2] with lamas being expelled and accused of being "Japanese spies" and "the people's enemies".[1]

After the fall of the Soviet Union, a Buddhist revival began in Kalmykia with the election of President Kirsan Ilyumzhinov.[5] It was also revived in Buryatia and Tuva and began to spread to Russians in other regions.

There are several Tibetan Buddhist university-monasteries throughout Russia,[8] concentrated in Siberia, known as Datsans.[6]

Fyodor Shcherbatskoy, a renowned Russian Indologist who traveled to India and Mongolia during the time of the Russian Empire, is widely considered by many to be responsible for laying the foundations for the study of Buddhism in the Western world.