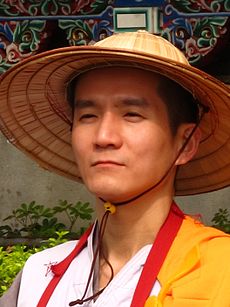 Taiwanese Buddhist monk with traditional robes and a bamboo hat.

Buddhism is the major religion in Taiwan. Taiwanese people predominantly practice Mahayana Buddhism, Confucian principles, local practices and Taoist tradition.[1] (Roles for religious specialists from both Buddhist and Taoist traditions exist on special occasions such as childbirth and funerals). Of these, a smaller number identify more specifically with Chinese Buddhist teachings and institutions, without necessarily eschewing practices from other Asian traditions. Around 35% of the population believes in Buddhism.[2] A distinguishing feature of this form of Buddhism is the practice of vegetarianism.

Taiwan government statistics distinguish Buddhism from Taoism, giving almost equal numbers for both (in 2005, 8 million and 7.6 million, respectively, out of a total population of 23 million).[citation needed] Many of Taiwan's self-declared "Taoists" actually observe the more syncretistic practices associated with Chinese traditional religion which is based on Buddhism. Self-avowed Buddhists may also be adherents of more localized faiths such as Yiguandao, which also emphasize Buddhist figures like Guanyin or Maitreya and espouse vegetarianism. They are mostly vegetarians.

Four local Buddhist teachers whose institutions are especially significant are popularly likened to the "Four Heavenly Kings of Taiwanese Buddhism." They are:

Several of these figures have been influenced by the Humanistic Buddhism (人間佛教) of Master Yin Shun (印順), a theological approach which has come to distinguish Taiwanese Buddhism. (Sheng-yen's tradition is formally Zen Buddhism; Yin Shun was inspired by Taixu, who is less well known in Taiwan.) Their missions have branches all over the world. In a reversal of the older historical relationship, these Taiwanese Buddhists have played important roles in the revival of Buddhism in China.

This notion of ‘Humanistic Buddhism’ promotes a more direct relationship between Buddhist communities and the wider society. Also known as Socially Engaged Buddhism, its focuses on the improvement of society through participation in aspects such as environmental conservation. As mentioned before a large proportion of mainstream Buddhist institutions emphasize this approach.[3][4]

Venerable Taixu (1890-1947) contributed greatly to this approach, as he was somewhat disappointed with a continuous focus on only ritual and ceremony.[5] Taixu went about promoting more direct contributions to society through the Buddhist community. In fact he had three goals which were to spread Buddhism through the monastic community, encourage lay people to act according to Buddhist teachings in order to bring enlightenment to their lives and to establish Mahayana Buddhism as a significant component not only domestically but also internationally.[5]

Today Buddhist institutions are responsible for a number of public goods such as colleges and hospitals as well as disaster relief.[6] This approach has filtered down to current generations and has received widespread support. In fact Taixu’s approach can be directly attributed to the rapid growth in Buddhism experienced over the past few decades. There is some discrepancy between specific institutions on the role Buddhism should play in the political arena. Generally speaking members of Buddhist institutions are advised against participating in politics. For example, members of the Fo Guang Shan Buddhist school are encouraged to promote modern values such as equality, freedom and reason however concern should not necessarily lead to an intrusion into the political sphere.[5] It is also worth noting that many members of these mainstream Buddhist institutions are derived from the middle class.[7] Among many social groups in Taiwanese society the middle class has greatly benefited from Taiwan’s economic success. With more free time these members of society seek to engage in activities that give meaning to their lives and for many Buddhist institutions are able to provide this.

Also, these Buddhist schools contribute through cultural events and practices by publishing reading materials and by providing classes for calligraphy, dance and art.[5] Not only do Buddhist institutions contribute directly to society but they also seem to embed themselves in the lives of many through this emphasis on culture. It enables all citizens to include Buddhism in their lives and removes barriers between monks and nuns performing rituals in a far away monastery and the requirements of everyday life. This in turn creates a sense of belonging and identity within Taiwanese society helping to propagate Buddhism for many generations to come. 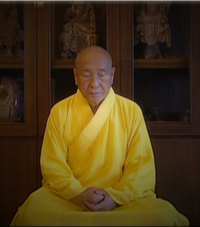 Buddhism was brought to Taiwan in the era of Dutch rule by settlers from Fujian and Guangdong[citation needed]. The Dutch colonial rulers, who controlled Taiwan from 1624 until 1663, discouraged Buddhism, since idol worship was punishable by public flogging and banishment by Dutch law.[8] In 1662, Koxinga drove the Dutch from Taiwan. His son Zheng Jing established the first Buddhist temple in Taiwan. During this period, Buddhist practice was not pervasive, with Buddhist monks only performing funeral and memorial services.[9]

When the Qing dynasty took control of Taiwan in 1683, large numbers of monks came from Fujian and Guangdong provinces to establish temples, particularly those devoted to Guanyin, and a number of different Buddhist sects flourished. Monastic Buddhism, however, did not arrive until the 1800s.

As a Japanese colony, Taiwan fell under the influence of Japanese Buddhism. Many temples experienced pressure to affiliate with Japanese lineages, including many whose status with respect to Buddhism or Taoism was unclear. (Emphasis on the Chinese folk religion was widely considered a form of protest against Japanese rule.) Attempts were made to introduce a married priesthood (as in Japan). These failed to take root, as emphasis on vegetarianism and/or clerical celibacy became another means of anti-Japanese protest.

With Japan's defeat in World War II, Taiwan fell under the control of Chiang Kai-shek's government, resulting in contrary political pressures. In 1949, a number of mainland monks fled to Taiwan alongside Chiang's military forces, and received preferential treatment by the new regime. During this period, Buddhist institutions fell under the authority of the government-controlled Buddhist Association of the Republic of China (zh:中國佛教會). Originally established in 1947 (in Nanjing), it was dominated by "mainland" monks. Its authority began to decline in the 1960s, when independent Buddhist organizations began to be permitted; and especially since the 1987 lifting of martial law in Taiwan. 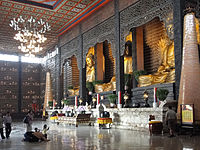 One of the first private networks of Buddhist centers was that of Hsing Yun, who first attained popularity through the new medium of radio broadcasts in the 1950s and later through publication of Buddhist audio on phonograph discs, leading the founding of Fo Guang Shan in 1967. Another key figure was Cheng Yen, a nun who was ordained by the aforementioned Yin Shun and later founded Tzu Chi, Taiwan's most important charity organization. It is difficult to overestimate the impact of her personal example on the image of Taiwan's sangha. Tzu Chi runs several hospitals in Taiwan, and conducts worldwide relief work. A 1999 earthquake centered in Puli brought praise for Tzu Chi for its effective response, in contrast with that of the Taiwanese government.

During the 1980s, Buddhist leaders pressed Taiwan's Ministry of Education to relax various policies preventing the organization of a Buddhist university. The eventual result was that in the 1990s—flush with contributions made possible by Taiwan's "miracle economy"—not one but half a dozen such schools emerged, each associated with a different Buddhist leader. Among them were Tzu Chi University, Hsuan-Chuang University, Huafan University, Fo Guang University, Nanhua University, and Dharma Drum Buddhist College. The regulations of the Ministry of Education prohibit recognized colleges and universities from requiring religious belief or practice, and these institutions therefore appear little different from others of their rank. (Degrees granted by seminaries, of which Taiwan has several dozen, are not recognized by the government.)

In 2001, Master Hsin Tao opened the Museum of World Religions in Taipei. In addition to exhibits on ten different world religions, the museum also features "Avatamsaka World," a model illustrating the Avatamsaka Sutra.

In 2009 Taiwan lost one of its most influential Buddhist teachers when Sheng-yen of the Dharma Drum Mountain monastery died.

Development of the Vajrayana schools

In recent decades Vajrayana Buddhism has increased in popularity in Taiwan as Tibetan lamas from the four major Tibetan schools (Kagyu, Nyingma, Sakya and Gelug) have visited the island, including the 14th Dalai Lama, who visited the island thrice in 1997, 2001 and 2009.

The Koyasan Shingon sect of Japan also maintains its own practice centers and temples in Taiwan, some of them historically established during the Japanese period of Taiwanese history, while others were established in the post-WWII era in order to re-establish an orthodox Esoteric Buddhist lineage that was long eliminated during the Tang Dynasty.

The True Buddha School, founded in the late 1980s by Taiwanese native Lu Sheng-yen, is one of the more well known of the Vajrayana sects in Taiwan, although at least seven established Buddhist organisations have charged that the group functions as a personality cult.[10][11]

Statistics provided by the Interior Ministry show that Taiwan's Buddhist population grew from 800,000 in 1983 to 4.9 million in 1995, a 600 percent increase against an overall population rise of about twelve percent.[12] Additionally, in the same period the number of registered Buddhist temples increased from 1,157 to 4,020, and the number of monks and nuns was up 9,300 monks and nuns, up from 3,470 in 1983.[13] This trend can be attributed to the activity of various charismatic teachers, such as those mentioned above.

There are also a number of other factors, which can be attributed to the increase. The factors are a general search for identity among Taiwanese citizens, increased urbanization as well as a sense of isolation in an increasingly impersonal society (175 BWC). Naturally this would lead to an increase in the participation for a number of religions however Buddhism has definitely benefited.

Aside from societal influences there have also been a number of developments when it comes to the Buddhist community. As Buddhist groups become more involved in people’s everyday lives there has been a general push to make the teachings of Buddhism more relevant and applicable to modern- day issues such as environmental protection, human rights and stress management.[5]

Economic growth and general prosperity has also been an important factor for Buddhism in Taiwan. As people acquire time-saving goods such as cars and appliances, extra time can be allocated to an activity which can help provide meaning or a goal to people’s lives. This has definitely been the case in Taiwan where people look for deeper satisfaction beyond the immediate and the materialistic.[5] Economic prosperity has also meant that donations and volunteering have increased throughout a number of Taiwanese communities.

Historical elements have a part to play. Buddhism faced severe challenges between 1949-78. Buddhism, among other aspects, was seen as an aspect of Chinese culture that was holding the nation back. Many monks and nuns were forced to give up their monastic lives and become part general society. It wasn’t until 1978 that Buddhism has been able to re-surface in mainland China.

However, there has been a different experience in Taiwan. Significant funding and a more liberal approach to religion as enabled Taoism, Buddhism and other folk religions to spread. This different environment has enabled Taiwan to become, what some consider now as the centre of Chinese Buddhism with many schools, temples and shrines established all over the island by many prominent Buddhist leaders.[5] This growth has seen Buddhism become a very significant religious presence in Taiwan.