Buddhism in the Maldives 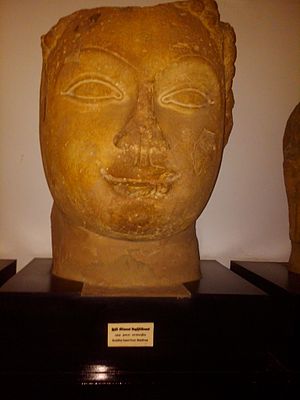 Buddhism in the Maldives was the predominant religion at least until the 12th century CE. It is not clear how Buddhism was introduced into the islands although there are number of competing theories. The predominant view is that it was introduced with the expansion of Sinhalese people from neighboring Sri Lanka who are predominantly Buddhist.

Western interest in the archaeological remains of early cultures on the Maldives began with the work of H. C. P. Bell, a British commissioner of the Ceylon Civil Service. Bell was shipwrecked on the islands in 1879, and returned several times to investigate ancient Buddhist ruins. He studied the ancient mounds, called havitta or ustubu (these names are derived from chaitiya or stupa) (Maldivian: ހަވިއްތަ) by the Maldivians, which are found on many of the atolls.[1]

According to a legend of the Maldivian Folklore, a prince named Koimala from India or Sri Lanka entered the Maldives from the North (Ihavandhu) and became the first king from the House of Theemuge. Prior to that the Maldives had been settled by people of Dravidian origin from the nearest coasts, like the group today known as the Giravaaru who claim ancestry from ancient Tamils. It is unlikely that the Giraavaru islanders were the only early settlers in the Maldives. The importance they have been given is because they are mentioned in the legend about the establishment of the capital and kingly rule in Malé. The Giraavaru people were just one of the island communities predating Buddhism and the arrival of a Northern Kingly dynasty and the establishment of centralized political and administrative institutions.

The ancient Maldivian Kings promoted Buddhism and the first Maldive writings and artistic achievements in the form of highly developed sculpture and architecture are from that period. The conversion to Islam is mentioned in the Isdhoo (Laamu Atoll) monks from monasteries of the southern atoll of Haddhunmathi were brought to Malé and beheaded. There is also a locally well-known legend about a foreign saint (Persian or Moroccan according to the versions) who subdued a demon known as Rannamaari.

Over the centuries, the islands have been visited and their development influenced by sailors and traders from countries on the Arabian Sea and the Bay of Bengal. Until relatively recent times, Mappila pirates from the Malabar Coast harassed the islands.

Destruction of Buddhist sculptures in 2012

In February 2012, a group of Islamic extremists forced their way into the National Museum in Malé and attacked the museum's collection of pre-Islamic sculptures, destroying or severely damaging nearly the entire collection about thirty Hindu and Buddhist sculptures dating from the 6th to 12th centuries.[3] Museum staff indicated that as the sculptures were made from very brittle coral or limestone it would be impossible to repair most of them, and only two or three pieces were in a repairable condition.[4]