Buddhist religious architecture developed in the Indian Subcontinent in the 3rd century BCE.

Three types of structures are associated with the religious architecture of early Buddhism: monasteries (viharas), places to venerate relics (stupas), and shrines or prayer halls (chaityas also called chaitya grihas), which later came to be called temples in some places.

Viharas initially were only temporary shelters used by wandering monks during the rainy season, but later were developed to accommodate the growing and increasingly formalised Buddhist monasticism. An existing example is at Nalanda (Bihar). A distinctive type of fortress architecture found in the former and present Buddhist kingdoms of the Himalayas are dzongs.

The initial function of a stupa was the veneration and safe-guarding of the relics of the Buddha. The earliest surviving example of a stupa is in Sanchi (Madhya Pradesh).

In accordance with changes in religious practice, stupas were gradually incorporated into chaitya-grihas (prayer halls). These reached their high point in the 1st century BC, exemplified by the cave complexes of Ajanta and Ellora (Maharashtra). The Mahabodhi Temple at Bodh Gaya in Bihar is another well known example.

The Pagoda is an evolution of the Indian stupa. 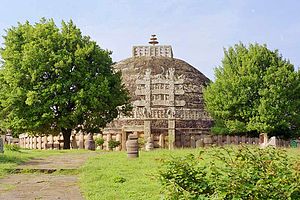 The Great Stupa in Sanchi 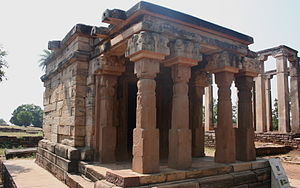 Buddhist architecture emerged slowly in the period following the Buddha’s life, along with the Hindu temple architecture.

Hindu temples at this time followed a simple plan – a square inner space, the sacrificial arena, often with a surrounding ambulatory route separated by lines of columns, with a conical or rectangular sloping roof, behind a porch or entrance area, generally framed by freestanding columns or a colonnade. The external profile represents Mount Meru, the abode of the gods and centre of the universe. The dimensions and proportions were dictated by sacred mathematical formulae. This simple plan was adopted by early Buddhists, sometimes adapted with additional cells for monks at the periphery (especially in the early cave temples such as at Ajanta, India).[1]

In essence the basic plan survives to this day in Buddhist temples throughout the world. The profile became elaborated and the characteristic mountain shape seen today in many Hindu temples was used in early Buddhist sites and continued in similar fashion in some cultures (such as the Khmer). In others, such as Japan and Thailand, local influences and differing religious practices led to different architecture.

Early temples were often timber, and little trace remains, although stone was increasingly used. Cave temples such as those at Ajanta have survived better and preserve the plan form, porch and interior arrangements from this early period. As the functions of the monastery-temple expanded, the plan form started to diverge from the Hindu tradition and became more elaborate, providing sleeping, eating and study accommodation.

A characteristic new development at religious sites was the stupa. Stupas were originally more sculpture than building, essentially markers of some holy site or commemorating a holy man who lived there. Later forms are more elaborate and also in many cases refer back to the Mount Meru model.

One of the earliest Buddhist sites still in existence is at Sanchi, India, and this is centred on a stupa said to have been built by King Ashoka (273-236 BCE). The original simple structure is encased in a later, more decorative one, and over two centuries the whole site was elaborated upon. The four cardinal points are marked by elaborate stone gateways.[2]

As with Buddhist art, architecture followed the spread of Buddhism throughout south and east Asia and it was the early Indian models that served as a first reference point, even though Buddhism virtually disappeared from India itself in the 10th century.

Decoration of Buddhist sites became steadily more elaborate through the last two centuries BCE, with the introduction of tablets and friezes, including human figures, particularly on stupas. However, the Buddha was not represented in human form until the 1st century CE. Instead, aniconic symbols were used. This is treated in more detail in Buddhist art, Aniconic phase. It influenced the development of temples, which eventually became a backdrop for Buddha images in most cases.

As Buddhism spread, Buddhist architecture diverged in style, reflecting the similar trends in Buddhist art. Building form was also influenced to some extent by the different forms of Buddhism in the northern countries, practicing Mahayana Buddhism in the main and in the south where Theravada Buddhism prevailed.