A Buddhist chant is a form of musical verse or incantation, in some ways analogous to Hindu, Christian or Jewish religious recitations. They exist in just about every part of the Buddhist world, from the Wats in Thailand to the Tibetan Buddhist temples in India and Tibet. Almost every Buddhist school has some tradition of chanting associated with it, regardless of being Theravada or Mahayana.

In Buddhism, chanting is the traditional means of preparing the mind for meditation, especially as part of formal practice (in either a lay or monastic context). Some forms of Buddhism also use chanting for ritualistic purposes.

While the basis for most Theravada chants is the Pali Canon, Mahayana and Vajrayana chants draw from a wider range of sources. 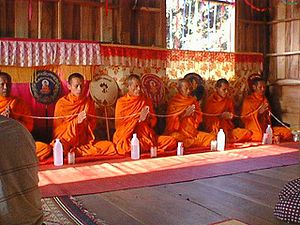 In the Theravada tradition, chanting is usually done in Pali, sometimes with vernacular translations interspersed.[1] Among the most popular Theravada chants[1] are:

The traditional chanting in Khmer Buddhism is called Smot.[9] 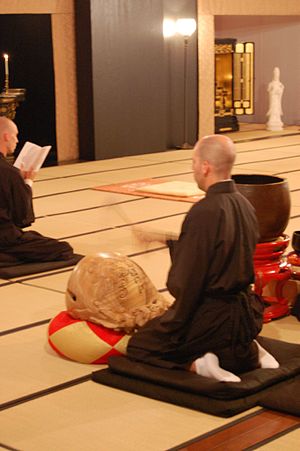 Chanting in the sutra hall

Since Japanese Buddhism is divided in thirteen doctrinal schools, and since Chan Buddhism, Zen and Buddhism in Vietnam – although sharing a common historical origin and a common doctrinal content – are divided according to geographical borders, there are several different forms of arrangements of scriptures to chant within Mahayana Buddhism.:

In the Vajrayana tradition, chanting is also used as an invocative ritual in order to set one's mind on a deity, Tantric ceremony, mandala, or particular concept one wishes to further in themselves.

For Vajrayana practitioners, the chant Om Mani Padme Hum is very popular around the world as both a praise of peace and the primary mantra of Avalokitesvara. Other popular chants include those of Tara, Bhaisajyaguru, and Amitabha.

Tibetan monks are noted for their skill at throat-singing, a specialized form of chanting in which, by amplifying the voice's upper partials, the chanter can produce multiple distinct pitches simultaneously. Japanese esoteric practitioners also practice a form of chanting called shomyo.

In the Ghitassara Sutta, the Buddha teaches:

John Daido Loori justified the use of chanting sutras by referring to Zen master Dōgen.[11] Dōgen is known to have refuted the statement "Painted rice cakes will not satisfy hunger". This statement means that sutras, which are just symbols like painted rice cakes, cannot truly satisfy one's spiritual hunger. Dōgen, however, saw that there is no separation between metaphor and reality. "There is no difference between paintings, rice cakes, or any thing at all".[12] The symbol and the symbolized were inherently the same, and thus only the sutras could truly satisfy one's spiritual needs.

To understand this non-dual relationship experientially, one is told to practice liturgy intimately.[13] In distinguishing between ceremony and liturgy, Dōgen states, "In ceremony there are forms and there are sounds, there is understanding and there is believing. In liturgy there is only intimacy." The practitioner is instructed to listen to and speak liturgy not just with one sense, but with one's "whole body-and-mind". By listening with one's entire being, one eliminates the space between the self and the liturgy. Thus, Dōgen's instructions are to "listen with the eye and see with the ear". By focusing all of one's being on one specific practice, duality is transcended. Dōgen says, "Let go of the eye, and the whole body-and-mind are nothing but the eye; let go of the ear, and the whole universe is nothing but the ear." Chanting intimately thus allows one to experience a non-dual reality. The liturgy used is a tool to allow the practitioner to transcend the old conceptions of self and other. In this way, intimate liturgy practice allows one to realize emptiness (sunyata), which is at the heart of Zen Buddhist teachings.

There are also a number of New Age and experimental schools related to Buddhist thought which practise chanting, some with understanding of the words, others merely based on repetition. A large number of these schools tend to be syncretic and incorporate Hindu japa and other such traditions alongside the Buddhist influences.

While not strictly a variation of Buddhist chanting in itself, Japanese Shigin (詩吟) is a form of chanted poetry that reflects several principles of Zen Buddhism. It is sung in the seiza position, and participants are encouraged to sing from the gut - the Zen locus of power. Shigin and related practices are often sung at Buddhist ceremonies and quasi-religious gatherings in Japan.