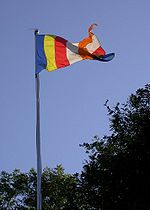 A Buddhist flag flying in Beijing.

The Buddhist flag is a flag designed in the late 19th century to symbolize and universally represent Buddhism.[1] It is used by Buddhists throughout the world.

It was first hoisted in public on Vesak day, 28 April 1885 at the Dipaduttamarama, Kotahena, by Ven. Migettuwatte Gunananda Thera.[3] This was the first Vesak public holiday under British rule.[3]

Colonel Henry Steel Olcott, an American journalist, founder and first president of the Theosophical Society, felt that its long streaming shape made it inconvenient for general use. He therefore suggested modifying it so that it was the size and shape of national flags.[1]

In 1889 the modified flag was introduced to Japan by Anagarika Dharmapala and Olcott—who presented it to Emperor Meiji—and subsequently to Burma.

At the 1952 World Fellowship of Buddhists, the flag of Buddhists was adopted as the International Buddhist Flag.[4]

The six vertical bands of the flag represent the six colors of the aura which Buddhists believe emanated from the body of the Buddha when he attained Enlightenment:[5][1]

The sixth vertical band, on the fly, is made up of a combination of rectangular bands of the five other colours, and represents a compound of the other five colours in the aura's spectrum. This compound colour is referred to as Pabbhassara ('essence of light').

The variant Japanese flag in Kyoto.

The Dharmacakra flag, symbol of Buddhism in Thailand.

The nonsectarian Buddhist flag is flown over the temples of many different schools. However, some choose to change the colors of the flag to emphasize their own teachings.

In 1963, the Catholic President of South Vietnam Ngo Dinh Diem selectively invoked a law prohibiting flags other than that of the nation, to ban the Buddhist flag from being flown on Vesak, when Vatican flags had habitually flown at government events. This led to protests, which were ended by lethal firing of weapons, starting the Buddhist crisis.