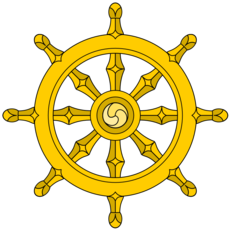 The eight-spoked Dharmacakra. The eight spokes represent the Noble Eightfold Path of Buddhism.

Buddhist symbolism is the use of Buddhist art to represent certain aspects of dharma, which began in the 4th century BCE. Anthropomorphic symbolism appeared from around the 1st century CE with the arts of Mathura and the Greco-Buddhist art of Gandhara, and were combined with the previous symbols. Various symbolic innovations were later introduced, especially through Tibetan Buddhism. 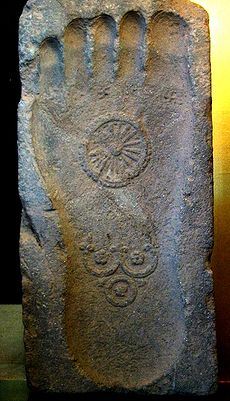 Footprint of the Buddha. 1st century, Gandhara, with depictions of the triratna and the Dharmacakra.

It is not known what the role of the image was in Early Buddhism, although many surviving images can be found, because their symbolic or representative nature was not clearly explained in early texts. Among the earliest and most common symbols of Buddhism are the stupa (and the relics therein), the Dharma wheel, the Bodhi tree (and the distinctively shaped leaves of this tree) and the lotus flower. The dharma wheel, traditionally represented with eight spokes, can have a variety of meanings. It initially only meant royalty (concept of the "Monarch of the Wheel, or Chakravatin), but it began to be used in a Buddhist context on the Pillars of Ashoka during the 3rd century BC. The Dharma wheel is generally seen as referring to the historical process of teaching the buddhadharma, the eight spokes referring to the Noble Eightfold Path. The lotus, as well, can have several meanings, often referring to the quality of compassion and subsequently to the related notion of the inherently pure potential of the mind. The Bodhi tree represents the spot where the Buddha reached nibbana and thus represents liberation.

Other early symbols include the monks begging bowl and the trisula, a symbol used since around the 2nd century BC, and combining the lotus, the vajra diamond rod and a symbolization of the three jewels (The Buddha, the dharma, the sangha). The lion, riderless horse and also deers were also used in early Buddhist iconography. The Buddha's teachings are referred to as the 'Lion's Roar' in the suttas, indicative of their power and nobility. The riderless horse represents renunciation and the deer represent Buddhist disciples, as the Buddha gave his first sermon at the deer park of Varanasi.

The swastika was traditionally used in India by Buddhists and Hindus to represent good fortune. In East Asia, the swastika is often used as a general symbol of Buddhism. Swastikas used in this context can either be left or right-facing.

Early Buddhism did not portray the Buddha himself instead using an empty throne and the Bodhi tree to represent the Buddha and thus may have leaned towards aniconism. The first hint of a human representation in Buddhist symbolism appear with the Buddha footprint and full representations were influenced by Greco-Buddhist art.

In Theravada, Buddhist art stayed strictly in the realm of representational and historic meaning. Reminders of the Buddha, cetiya, were divided up into relic, spatial, and representational memorials.

Although the Buddha was not represented in human form until around the 1st century AD (see Buddhist art), the Physical characteristics of the Buddha are described in one of the central texts of the traditional Pali canon, the Digha Nikaya, in the discourse titled "Sutra of the Marks" (Pali: Lakkhana Sutta) (D.iii.142ff.).

These characteristics comprise 32 signs, "The 32 signs of a Great Man" (Pali: Lakkhana Mahapurisa 32), and were supplemented by another 80 Secondary Characteristics (Pali:Anubyanjana). These traits are said to have defined the appearance of the historical Buddha, Siddhartha Gautama and have been used symbolically in many of his representations. 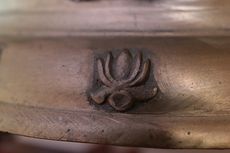 Lotus flower on a temple bell. The lotus represents purity of the body, speech, and mind as if floating above the muddy waters of attachment and desire.
Main article: Ashtamangala 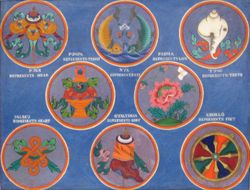 In Mahayana, Buddhist figures and sacred objects leaned towards esoteric and symbolic meaning. The Mudras are a series of symbolic hand gestures describing the actions of the characters represented in only the most interesting Buddhist art. Many images also function as mandalas.

Mahayana and Vajrayana Buddhist art frequently makes use of a particular set of eight auspicious symbols, ashtamangala, in domestic and public art. These symbols have spread with Buddhism to the art of many cultures, including Indian, Tibetan, Nepalese, and Chinese art.

Other Vajrayana symbols include the Vajra, the Ghanta, the Snow lion, the Wind Horse, the Bhavacakra, mandalas, the number 108 and the Buddha eyes commonly seen on Nepalese stupas such as the Boudhanath stupa.

In Zen Buddhism, a widely used symbol is the ensō circle.

Tibetan Buddhist architecture is centred on the stupa called in Tibetan chorten. The chorten consists of five parts that represent the five elements. The base is square which represents the earth element, above that sits a dome representing water, on that is a cone representing fire, on the tip of the cone is a crescent representing air, inside the crescent is a flame representing ether. The tapering of the flame to a point can also be said to represent consciousness as a sixth element. The chorten presents these elements of the body in the order of the process of dissolution at death.[1]

Tibetan temples are often three-storied. The three can represent many aspects such as the Trikaya (three aspects) of a buddha. The ground storey may have a statue of the historical buddha Shakyamuni and depictions of Earth and so represent nirmayakaya. The first storey may have dhyani buddha and elaborate ornamentation representing rising above the human condition and the sambhogakaya. The second storey may have a primordial adibuddha in sexual union with his female counterpart and be otherwise unadorned representing a return to the absolute reality and the dharmakaya.[1]

The five colours (panchavarna - white, green, yellow, blue, red) are supplemented by several other colours including black and orange and gold (which is commonly associated with yellow). They are commonly used for prayer flags as well as for visualising deities and spiritual energy, construction of mandalas and the painting of religions icons.

Thangkas (paintings) and statues of buddhas and deities

Tibetan Buddhist deities may often assume different roles and be drawn, sculpted and visualised differently according to these roles, for example, Green Tara and White Tara which are but two of many different aspects of Tara.

Aside from these vivid colours, figures may also be coloured more naturalistically such as skin in shades of pink or brown. Gold leaf and gold paint are also common. These colours help distinguish many deities that are less easily distinguished in other branches of Buddhism. For instance while Shakyamuni Buddha may be seen in (pale) yellow or orange and Amitabha Buddha is typically red in Vajrayana thangkas, in Chinese Buddhism it is often only the hand pose that distinguishes the two who are otherwise drawn with the same attributes.

Depictions of "wrathful deities" are often depicted very fearsomely, crushing their foes, with monstrous visages and wearing memento mori in the form of skulls or bodily parts. Such deities are depicted in this way as sometimes great wrath is required to overcome great ignorance and adharma.[1]

As is common in Buddhism, the lotus is used in Vajrayana. A lotus may appear fully blossomed, starting to open or still a bud to represent the teachings that have gone, are current or are yet to come.

Avalokitesvara is often depicted with one thousand (or, at least, many) arms to represent the many methods he uses to help all sentient beings and often has eleven heads to symbolise his compassion is directed to all sentient beings.

Vajrayana Buddhism often specifies the number of feet of a buddha or boddhisatva. While two is common there may also be ten, sixteen, or twenty-four feet. The position of the feet/legs may also have a specific meaning such as in Green Tara who is typically depicted as seated partly cross-legged but with one leg down symbolising "immersion within in the absolute, in meditation" and readiness to step forth and help sentient beings by "engagement without in the world through compassion".[1]

At its founding in 1952, the World Fellowship of Buddhists adopted two symbols.[4] These were a traditional eight-spoked Dharma wheel and the five-colored flag which had been designed in Sri Lanka in the 1880s with the assistance of Henry Steel Olcott.[5]