The Bulgarian Navy (Bulgarian: Военноморски сили на Република България, Voennomorski sili na Republika Balgariya) is the navy of the Republic of Bulgaria and forms part of the Bulgarian Armed Forces. It has been largely overlooked in the reforms that Bulgaria had to go through in order to comply with NATO standards, mostly because of the great expense involved and the fact that naval assaults are not considered to be a great concern for the country's security.[citation needed] That is why three of the four Romeo-class submarines (excluding Slava) are now docked and have been out of operation for some time. The last one was decommissioned in November 2011.[1] Only the more modern frigates, corvettes and missile crafts are on active duty.

In order to meet some of the NATO requirements, the Bulgarian government purchased a Wielingen-class frigate from Belgium in 2005. BNS Wandelaar (F-912), built in 1977, was renamed BG Drazki. That same year the Bulgarian ship Smeli took part as a full NATO member for the first time in NATO OAE (Operation Active Endeavour). In 2006, following a decision of the Bulgarian National Assembly, Drazki deployed as part of the United Nations Interim Forces in Lebanon (UNIFIL), patrolling the territorial waters of Lebanon under German command. This was the first time the Bulgarian Navy took part in an international peacekeeping operation. The Bulgarian government purchased two Wielingen-class frigates and one Tripartite-class minehunter in 2007. 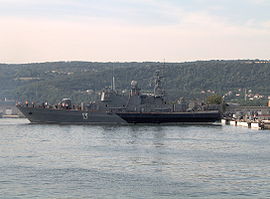 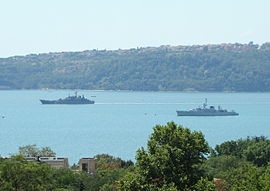 The Bulgarian fleet in Varna

According to the reform plans envisioned in the White Paper on Defence 2010, the two naval bases would be merged into one with two base facilities in Varna and Burgas. The manpower of the Navy would account to about 3,400 seamen. The ordered Eurocopter AS565 MB Panther helicopters were reduced from 6 to 3 units. Between 2011 and 2020 the naval "Longterm Investment Plan" should come into action, providing the sea arm of the Bulgarian military with modernised ships and new equipment.

The Bulgarian Navy will modernise three of its Wielingen-class frigates in the future. The frigates will be equipped with landing pads, allowing helicopters to land and take off from the ships' decks.[2] The list does not include vessels assigned to the border police. 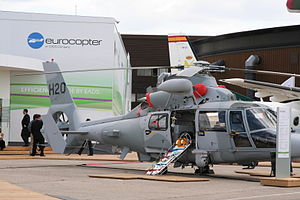