This article discusses the phonological system of Standard Bulgarian. Most scholars agree that contemporary Bulgarian has 45 phonemes but different authors place the real number of Bulgarian phonemes between 42-45 and 47,[citation needed] depending on whether one includes or excludes phonemes which appear primarily only in borrowed foreign words. 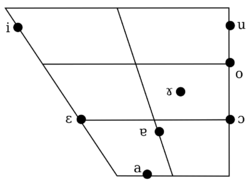 Bulgarian's vowels may be grouped in three pairs according to their backness: front, central and back. In stressed syllables, six vowels are phonemic.[citation needed] Unstressed vowels tend to be shorter and weaker compared to their stressed counterparts, and the corresponding pairs of open and closed vowels approach each other with a tendency to merge, above all as low (open and open-mid) vowels are raised and shift towards the high (close and close-mid) ones. However, the coalescence is not always complete. The vowels are often distinguished in emphatic or deliberately distinct pronunciation, and reduction is strongest in colloquial speech. Besides that, some linguists distinguish two degrees of reduction, as they have found that a clearer distinction tends to be maintained in the syllable immediately preceding the stressed one. The complete merger of the pair /a/ – /ɤ/ is regarded as most common, while the status of /ɔ/ vs /u/ is less clear. The coalescence of /ɛ/ and /i/ is not allowed in formal speech and is regarded as a provincial (East Bulgarian) dialectal feature; instead, unstressed /ɛ/ is both raised and centralized, approaching [ɤ].[1] The /ɤ/ vowel itself does not exist as a phoneme in other Slavic languages, though a similar reduced vowel transcribed as [ə] does occur.

The Bulgarian language possesses only one semivowel: /j/. Orthographically it is represented by the Cyrillic letter ⟨й⟩ (⟨и⟩ with a breve) as in най [naj] ('most'), тролей [troˈlɛj] ('trolleybus'), except when it precedes /a/ or /u/ (and their reduced counterparts [ɐ] and [o]), in which case the two phonemes are represented by a single letter, respectively ⟨я⟩ or ⟨ю⟩: e.g. ютия [juˈtijɐ] ('flat iron'), but Йордан [jorˈdan] ('Jordan').

Bulgarian has a total of 36 consonant phonemes (see table below).[2][3][4] Three additional phonemes can also be found ([xʲ], [d͡z], and [d͡zʲ]), but only in foreign proper names such as Хюстън /xʲustɤn/ ('Houston'), Дзержински /d͡zɛrʒinski/ ('Dzerzhinsky'), and Ядзя /jad͡zʲa/, ('Jadzia'). They are, however, normally not considered part of the phonetic inventory of the Bulgarian language. The Bulgarian obstruent consonants are divided into 12 pairs of voiced and voiceless consonants. The only obstruent without a counterpart is the voiceless velar fricative /x/. The contrast voicing contrast is neutralized in word-final position, where all obstruents are voiceless (a common feature in Slavic languages); this neutralization is, however, not reflected in the spelling.

^5 Not a native phoneme, but appears in borrowings from English. It is always written as the Cyrillic letter ⟨у⟩ /u/ in Bulgarian orthography although a small number of people have suggested the use of ⟨ў⟩ in such cases (by way of analogy to the shape (mainly the use of a breve) of the Cyrillic letter ⟨й⟩ which stands for the semi-vowel /j/ in Bulgarian). That suggestion for the use of ⟨ў⟩ hasn't gained any widespread use, however.

^6 [l] can be analyzed as an allophone of /ɫ/, as it appears only before front vowels. A trend of l-vocalization is emerging among younger native speakers and more often in colloquial speech.

Like a number of other Eastern Slavic languages, most consonant phonemes come in "hard" and "soft" pairs. The latter tend to feature palatalization, or the raising of the tongue toward the hard palate. Thus, for example, /b/ contrasts with /bʲ/ by the latter being palatalized. The consonants /ʒ/, /ʃ/, /t͡ʃ/, and /d͡ʒ/ are considered hard and do not have palatalized variants, though they may palatalization in some speakers' pronunciation.

The distinction between hard and soft consonants is clear in Bulgarian orthography, where hard consonants are considered normal and precede either ⟨а⟩, ⟨у⟩, ⟨о⟩, or ⟨ъ⟩. Soft consonants appear before ⟨и⟩, ⟨е⟩, ⟨я⟩, ⟨ю⟩, or ⟨ьо⟩. In certain contexts, the contrast hard/soft contrast is neutralized. For example, in Eastern dialects, only soft consonants appear before /i/ and /ɛ/. Similarly, Standard Bulgarian lacks a contrast between velar and palatal consonants in the same environment, with only the latter appearing. /l/ varies along the same principles: one of its allophones, involving a raising of the back of the tongue and a lowering of its middle part (thus similar or, according to some scholars, identical to a velarized lateral), occurs in all positions, except before the vowels /i/ and /ɛ/, where a more "clear" version with a slight raising of the middle part of the tongue occurs. The latter pre-front realization is traditionally called "soft l" (though it is not phonetically palatalized. In some Western Bulgarian dialects, this allophonic variation does not exist.

Furthermore, in the speech of many young people the more common and arguably velarized allophone of /l/ is often realized as a labiovelar approximant [w].[8] This phenomenon, colloquially known as мързеливо л ('lazy l') in Bulgaria, was first registered in the 1970s and isn't connected to original dialects. Similar developments, termed L-vocalization, have occurred in many languages, including Polish, Slovene, Serbo-Croatian, Brazilian Portuguese and certain dialects of English such as Cockney and AAVE.

During the palatalization of most hard consonants (the bilabial, labiodental and alveolar ones), the middle part of the tongue is lifted towards the palate, resulting in the formation of a second articulatory centre whereby the specific palatal "clang" of the soft consonants is achieved. The articulation of alveolars /l/, /n/ and /r/, however, usually does not follow that rule; the palatal clang is achieved by moving the place of articulation further back towards the palate so that /ʎ/, /ɲ/ and /rʲ/ are actually alveopalatal (postalvelolar) consonants. Soft /ɡ/ and /k/ (/ɡʲ/ and /kʲ/, respectively) are articulated not on the velum but on the palate and are considered palatal consonants.

Stress usually isn't signified in written text. In cases where the stress must be indicated, a grave accent is placed on the vowel of the stressed syllable.[note 2] (Note:the following examples are also shown with a grave accent.)

Bulgarian word stress is dynamic. Stressed syllables are louder and longer than unstressed ones. As in Russian and other East Slavic languages, Bulgarian stress is also lexical rather than fixed as in French, Latin or the West Slavic languages. It may fall on any syllable of a polysyllabic word, and its position may vary depending on the inflection and derivation, for example –

Bulgarian stress is also distinctive: the following examples are only differentiated by stress –

Stress usually isn't signified in written text, even in the above examples, if the context makes the meaning clear. However, the grave accent may be written if confusion is likely. [note 4]