From Infogalactic: the planetary knowledge core
Jump to: navigation, search
File:Rabine Roses.jpg
Oscar Rabine, Roses on the Preobrazhensky Val, 1966. A typical painting of the main organizer of the exhibition at the time 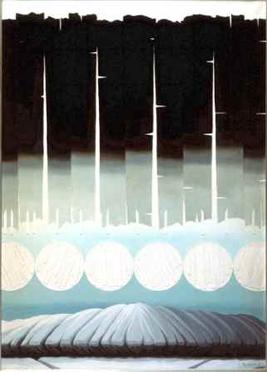 Bulldozer Exhibition (Russian: Бульдо́зерная вы́ставка) was an unofficial art exhibition on a vacant lot in the Belyayevo urban forest by Moscow avant-garde artists on September 15, 1974. The exhibition was forcefully broken-up by a large police force that included bulldozers and water cannons, hence the name.

Since the 1930s in the Soviet Union Socialist realism had been the one of the artstyles largely supported by the state. All other forms of art were forced underground and sometimes prosecuted. One of the attempts to break out of the underground to more public view was the Belyayevo exhibition.

It was organised by two underground artists, Evgeny Rukhin and Oscar Rabin (artist). Among the artists taking part in the exhibition were Oleg Tselkov, Eduard Steinberg, Vladimir Nemukhin, Nikolai Smoliakov, Lidiya Masterkova, Vera Sell-Ryazanoff, Klever (Valery), Igor Holin, Borukh (Boris Steinberg), Koryun Nahapetyan, Alexandr Zhdanov, Vladimir Bougrine, Eduard Drobitsky (currently, vice-president of Russian Academy of Arts), Edouard Zelenine, and Sots Art creators Vitaly Komar and Alexander Melamid. It was held on a vacant lot, officially part of an urban forest (лесопарк) in Belyayevo. Attendance consisted of approximately twenty artists and a group of spectators that included relatives, friends of the artists, friends of the friends and some Western journalists. The paintings were installed on makeshift stands made out of dump wood.

The organizer Oscar Rabin told in an interview in London in 2010: "The exhibition was prepared as a political act against the oppressive regime, rather than an artistic event. I knew that we'd be in trouble, that we could be arrested, beaten. There could be public trials. The last two days before the event were very scary, we were anxious about our fate. Knowing that virtually anything can happen to you is frightening." Rabin was arrested and punished with expulsion from Russia, but was allowed to leave with his family to Paris.[1]

Despite the minor size of the event it was considered by the authorities as very serious. They marshalled a large group of attackers that included three bulldozers, water cannons, dump trucks and hundreds of off-duty policemen. Officially, the group was supposed to be "gardeners" expanding the urban forest, who reacted in spontaneous outrage to the offense against their proletarian sensibilities. It was never denied, though, that they actually got their orders from the KGB.

The attackers actually destroyed the paintings, beat and arrested the artists, spectators and journalists. One of the most dramatic scenes was Oscar Rabin who actually went through the exhibition hanging to the blade of the bulldozer. One of the attackers, militsia lieutenant Avdeenko, memorably shouted at the artists: "You should be shot! Only you are not worth the ammunition ..." ("Стрелять вас надо! Только патронов жалко...").

Rabin later told to have relived the horror of seeing art crushed and artists arrested: "It was very frightening … The bulldozer was a symbol of an authoritarian regime just like the Soviet tanks in Prague." Two of his own paintings - a landscape and a still life - were among those flattened by bulldozers or burned by the invading KGB.[1]

After the event was widely publicized in the Western media, embarrassed authorities were forced to allow a similar open air exhibition in the Izmailovo urban forest two weeks later on 29 September 1974. The new exhibition of works of 40 artists was held for four hours and was visited by thousands of people (the numbers cited differ from one and a half thousand [1] to twenty-five thousand [2]). A participant in the exhibitions, Boris Zhutkov, has said that the quality of the Izmaylovo paintings was much lower than the paintings in Belyayevo, since in the original exhibition the artists showed the best paintings they had only to have most of them destroyed. The four hours in the forest of the Izmailovo exhibition has often been remembered as "The Half-day of Freedom." The Izmailovo exhibition in turn gave way to other exhibitions of nonconformist art which were very important in the history of modern Russian art.