From Infogalactic: the planetary knowledge core
(Redirected from Bulls (rugby))
Jump to: navigation, search
For other uses, see Bulls (disambiguation).

The Bulls, for sponsorship reasons known as the Vodacom Bulls, are a South African rugby union team competing in the Super Rugby competition. They are based in Pretoria and play their home matches at Loftus Versfeld. Prior to 1998, the Bulls competed in the then-Super 12 as Northern Transvaal, as in those years South Africa was represented in the competition by its top four Currie Cup sides from the previous season, instead of the modern Super Rugby teams.

Prior to the professional Super Rugby competition, Northern Transvaal competed in the Super 10, which was a tournament featuring ten teams from Australia, New Zealand, South Africa, Tonga and Western Samoa, which ran from 1993 to 1995. The top three teams from the previous Currie Cup season qualified for each of the Super 10 tournaments.

After rugby union went professional, the Super 10 tournament was restructured. The Super 12 was created, and was to be competed by teams from Australia, New Zealand and South Africa. Both Australia and New Zealand adopted new franchise models for their teams, whereas South Africa chose to use the Currie Cup to decide what teams were to be promoted in the Super 12 each season.

Competing in the inaugural Super 12 season of 1996, Northern Transvaal were one of the 12 teams. The side won eight of their 11 games and finished third on the table – behind only Auckland and Queensland. Jannie Kruger finished the season in the top three leading point-scorers, behind only Matthew Burke and John Eales. The side was however soundly defeated in a semi-final by the Auckland Blues, with the final score being 48 points to 11. The game was played at Eden Park in Auckland.

After their fairly successful performance in the opening competition, the subsequent competition of 1997 saw them with three wins and three draws from 11 games. They finished at eighth. Following the 1997 season, South Africa adopted a similar franchise system to that of Australia and New Zealand's, abolishing the Currie Cup promotion system in favour of creating new franchises. The Bulls were formed as one of the four new teams. They did not make the semis in the 1998 season.The Bulls were considered one of the worst teams in the Super 12 competition, finishing last or second to last for five consecutive seasons from 1998–2003. In 2002, they became the first team ever to go through an entire Super Rugby season without winning a single game. This record remained until the Lions repeated the feat during the 2010 season. After finishing fourth in the inaugural competition, they didn't make the semis again until the years 2003.

The Bulls finished in 6th place in both 2003 and 2004, though still missing out on a finals position. They equalled there 1996 performance in 2005, although there was a very poor start to the season, it was followed by six straight wins to earn them a semi-final berth, where they were defeated by the New South Wales Waratahs. Bryan Habana finished in the top three try-scorers by the end of the season, and was short-listed for IRB player of the year. 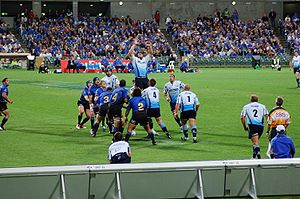 The Bulls playing the Western Force in Perth, Australia in 2006.

In 2006, the Super 12 became the Super 14, with the addition of two new franchises, the Central Cheetahs and the Western Force. By the last round of the 2006 season, the Bulls, along with the Brumbies and Sharks were all in contention to take the fourth and final position on the ladder to make the semi-finals. After the Brumbies were defeated 33 to 3 by the Crusaders, the Bulls or Sharks could mathematically take the fourth spot. The Bulls defeated the Stormers at Newlands in Cape Town 43 points to 10, which ensured they went through to the semi-finals. The Bulls travelled to Christchurch where they were defeated 35 to 15 at Jade Stadium and knocked out of the finals.

The Bulls lost their first game of the 2007 Super 14 season, going down to the Sharks in Durban 17 points to 3. Entering week 14, the last round of the regular season, the Bulls were chasing an unlikely 72-point win over the Queensland Reds in order to move into second place and get a home semi-final.[1] At Loftus, the Bulls defeated the Reds 92 points to 3, with the 89-point margin of victory setting a new Super rugby record.[1] The Bulls ran in 13 tries with four players getting doubles and Derick Hougaard kicking 11 conversions. The Sharks finished first, so it became the first time that both home venues in the semi-finals was in South Africa.

The Bulls defeated the Crusaders in their semi-final by 27 points to 12, with Derick Hougaard kicking eight penalties and a drop-goal. The Sharks ensured a home-final in the 2007 Super 14-competition by defeating the Blues with a scoreline of 34–18.

When the Bulls met the Sharks in the Super 14 final at the Absa Stadium in Durban the match turned out to be a tight, nervous affair with the Bulls initially being guilty of indiscipline and making a lot of mistakes. The Sharks carried a 14–10 advantage into half-time after a JP Pietersen try cancelled out one from Pierre Spies. The second half of the match was just as nail-biting, with the Bulls gaining the ascendancy in the match, but failing to turn their rising amount of possession into points. A Derick Hougaard penalty closed the gap to 14–13, after which the Bulls made several onslaughts on the Sharks line, only to lose the ball at critical stages. Their match looked to be all but over for the Bulls when Albert van den Berg barged over the line for a Sharks try two minutes from full-time to stretch their lead to six points. However, Francois Steyn failed with the conversion attempt, and the Bulls restarted with barely seconds on the clock. After regaining the ball from the kick-off, play went through several phases before Bryan Habana received the ball on the right wing. He cut infield and scored the most dramatic of match winning tries, more than a minute after official play. The try was converted by Derick Hougaard and the Bulls won the match by 20 points to 19. In 2009 the Bulls again won the super 14, defeating the Chiefs 61 – 17 in the final in Tshwane.

In 2010 the Bulls again finished top of the log by beating the Crusaders in a home semi final to secure a home final. Because the Fifa World cup was being hosted by South-Africa that year and Loftus was included as a venue, they had to play the Semi and Final in Soweto, A first in Super rugby history. The Stormers had beaten the Waratahs at home and would face off with the Bulls in the Final. The Bulls won the final once again in dramatic style when Francois Hougaard side stepped the Stormers Fullback Joe Petersen to score an impressive try. 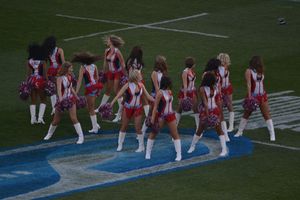 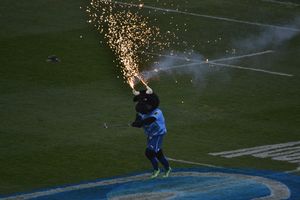 The Bulls play all their home matches at the Loftus Versfeld stadium in Pretoria, which is also the home of the Blue Bulls during the Currie Cup season. The stadium is also a regular host for Springboks Test matches, and was a venue during the 1995 Rugby World Cup which South Africa hosted. Loftus was a venue for Pool D matches including France v Tonga, Scotland v Tonga and France v Scotland. Loftus was also used twice during the finals stages – for the New Zealand v Scotland quarter-final and the England v France third place play-off.

The ground has been used for rugby since 1908, and in 1932 the stadium was renamed to Loftus Versfeld in honor of Robert Owen Loftus Versfeld, the founder of organized rugby in Pretoria.[2][3] The stadium has undergone numerous renovations over the years, and is currently capable of holding 51,762 spectators.

For player movements before and during the 2016 season, see List of 2015–16 Super Rugby transfers#Bulls.

The Bulls announced the following pre-season training squad prior to the 2016 Super Rugby season:[4]

Ten highest Super Rugby scores for the Bulls since 1996