Burning of books and burying of scholars

The burning of books and burying of scholars (Chinese: 焚書坑儒; pinyin: fénshū kēngrú) refers to the supposed burning of texts in 213 BC and live burial of 460 Confucian scholars in 210 BC by the First Emperor of the Qin dynasty of ancient China. The event caused the loss of many philosophical treatises of the Hundred Schools of Thought. The official philosophy of government ("legalism") survived.

Recent scholars doubt the details of these events in the Records of the Grand Historian—an original source of information for the period—since the author, Sima Qian, was an official of the Han dynasty, which succeeded the Qin dynasty, and could be expected to show it in an unfavourable light. While it is clear that the First Emperor gathered and destroyed many works which he regarded as subversive, two copies of each were to be preserved in imperial libraries, which were destroyed in the fighting following the fall of the dynasty. It is also now believed that many scholars were killed, but that they were not Confucians and were not "buried alive." In any case, the incidents and the phrase "burning of books and burying of scholars" became enduring legends in the Confucian legacy.[1][2][3]

According to the Sima Qian's Records of the Grand Historian, after Qin Shi Huangdi, the first emperor of China, unified China in 221 BC, his chancellor Li Si suggested suppressing intellectual discourse to unify thought and political opinion. Shiji Chapter 6. "The Basic Annals of the First Emperor of Qin" thirty fourth year (213 BC):

Chancellor Li Si Said: "I, your servant, propose that all historians' records other than those of Qin's be burned. With the exception of the academics whose duty includes possessing books, if anyone under heaven has copies of the Shi Jing, the Classic of History, or the writings of the hundred schools of philosophy, they shall deliver them (the books) to the governor or the commandant for burning. Anyone who dares to discuss the Shi Jing or the Classic of History shall be publicly executed. Anyone who uses history to criticize the present shall have his family executed. Any official who sees the violations but fails to report them is equally guilty. Anyone who has failed to burn the books after thirty days of this announcement shall be subjected to tattooing and be sent to build the Great Wall. The books that have exemption are those on medicine, divination, agriculture, and forestry. Those who have interest in laws shall instead study from officials."[lower-alpha 1]

Three categories of books were viewed by Li Si to be most dangerous politically. These were poetry (particularly Shih), history (Shu and especially historical records of other states than Qin), and philosophy. The ancient collection of poetry and historical records contained many stories concerning the ancient virtuous rulers. Li Si believed that if the people were to read these works they were likely to invoke the past and become dissatisfied with the present. The reason for opposing various schools of philosophy was that they advocated political ideas often incompatible with the totalitarian regime.[4]

The extent of the damage to Chinese intellectual heritage is difficult to assess, for details have not been recorded in history. There are several facts, however, that indicate the consequences of this event, although enduring, had not been extensive. First, it is recorded in Li Si's memorial that all technological books were to be spared. Secondly, even the "objectionable" books, poetry and philosophy in particular, were preserved in imperial archives and allowed to be kept by the official scholars.[5]

Of the various categories of books mentioned, history suffered the greatest loss. Extremely few state history books before Qin have survived. Li Si stated that all history books not in the Qin interpretation were to be burned. It is not clear whether copies of these books were allowed to stay in the imperial archives. Even if some histories were preserved, they would have been destroyed in 206 B.C. when enemies captured and burned the Qin imperial palaces in which the archives were most likely located.[6]

At the end of the Qin, the Epang Palace's national records were destroyed by fire. Tang dynasty poet Zhang Jie (章碣), in a timely manner, wrote a poem about the policy of destruction as follows:

Ash pit of burning before it gets cold, uprising broke out in the east of Mountain Xiao.
Liu Bang and Xiang Yu's uneducatedness emerged.

Burial of the scholars 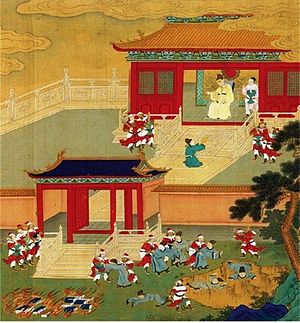 Tradition had it that after being deceived by two fangshi, or alchemists, while seeking prolonged life, Qin Shi Huangdi ordered more than 460 scholars in the capital to be buried alive in the second year of the proscription. The belief was based on this passage in the Shiji (chapter 6):

The first emperor therefore directed the imperial censor to investigate the scholars one by one. The scholars accused each other, and so the emperor personally determined their fate. More than 460 of them were buried alive at Xianyang, and the event is announced to all under heaven for warning followers. More people were internally exiled to border regions. Fusu, the eldest son of the emperor, counselled: "The empire just achieved peace, and the barbarians in distant areas have not surrendered. The scholars all venerate Confucius and take him as a role model. Your servant fears if Your Majesty punish them so severely, it may cause unrest in the empire. Please observe this, Your Majesty." However, he was unable to change his father's mind, and instead was sent to guard the frontier as a de facto exile.

An account given by Wei Hong in the 2nd century added another 700 to the figure.

The scholar Michel Nylan observes that "despite its mythic significance, the Burning of the Books legend does not bear close scrutiny." Nylan suggests that the reason Han dynasty scholars charged the Qin with destroying the Confucian Five Classics was partly to "slander" the state they defeated and partly because Han scholars misunderstood the nature of the texts, for it was only after the founding of the Han that Sima Qian labeled the Five Classics as “Confucian.” Nylan also points out that the Qin court appointed classical scholars who were specialists on the Classic of Poetry and the Documents, which meant that these texts would have been exempted, and that the Book of Rites and the Zuozhuan did not contain the glorification of defeated feudal states which the First Emperor gave as his reason for destroying them.[2] Martin Kern adds that Qin and early Han writings frequently cite the Classics, especially the Documents and the Classic of Poetry, which would not have been possible if they had been burned, as reported.[3]