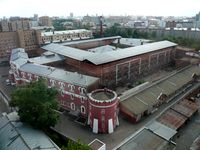 The first references to Butyrka prison may be traced back to the 17th century. The present prison building was erected in 1879 near the Butyrsk gate (Бутырская застава, or Butyrskaya zastava) on the site of a prison-fortress which had been built by the architect Matvei Kazakov during the reign of Catherine the Great. The towers of the old fortress once housed the rebellious Streltsy during the reign of Peter I, and later on hundreds of participants of the 1863 January Uprising in Poland. Members of Narodnaya Volya were also prisoners of the Butyrka in 1883, as were the participants in the Morozov Strike of 1885. The Butyrka prison was known for its brutal regime. The prison administration resorted to violence every time the inmates tried to protest against anything.

Among its famous inmates were the influential revolutionary poet Vladimir Mayakovsky, a Russian revolutionary Nikolai Bauman, the founder of the KGB Felix Dzerzhinsky (who was one of the few individuals to stage a successful escape from the prison), and the writers Aleksandr Solzhenitsyn and Yevgenia Ginzburg.

During the February Revolution, the workers of Moscow freed all the political prisoners from the Butyrka.

After the October Revolution Butyrka remained a place of internment for political prisoners and a transfer camp for people sentenced to be sent to the Gulag.

During the Great Purge about twenty thousand inmates at a time were imprisoned in Butyrka. Thousands of political prisoners were shot after investigations.

Shalamov notes, in one of his tales, that the Butyrka is extremely hot in summer; Eduard Limonov, in his drama Death in the Police Van, emphatically agrees. He says that, with the collapse of the Soviet regime, overcrowding has become a real issue; there are more than one hundred inmates in cells meant to contain ten people. Most of these people are politically unreliable subjects from the Caucasus. Since epidemics are a problem, the wardens try to fill cells entirely with people with AIDS, or with tuberculosis; however, this avails little, since many inmates are drug users, and there is at most one needle per cell. Moreover, inmates are brought to the tribunal in overcrowded police vans, so that a healthy inmate may breathe the same air as one with tuberculosis. The Butyrka has a peculiar slang: the wardens are called "manti", the inmates "patzani", to take drugs is "smazatsia", i. e., to oil oneself. The word khuy is used profusely. On a lighter note, television has been allowed since 1995.