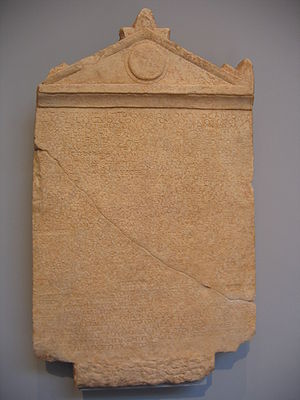 The statutes (or bylaws) of an ancient Greek religious organisation devoted to the worship of Herakles, inscribed on a marble tablet.

A by-law (sometimes also spelled bylaw, by law or bye-law) is a rule or law established by an organization or community to regulate itself, as allowed or provided for by some higher authority. The higher authority, generally a legislature or some other government body, establishes the degree of control that the by-laws may exercise. By-laws may be established by entities such as a business corporation, a neighborhood association, or depending on the jurisdiction, a municipality. In the United States, bylaw is the preferred spelling.

In the United Kingdom, Canada, and some Commonwealth countries, the local laws established by municipalities are referred to as by-laws because their scope is regulated by the central governments of those nations. Accordingly, a bylaw enforcement officer is the Canadian equivalent of the American Code Enforcement Officer or Municipal Regulations Enforcement Officer. In the United States, the federal government and most state governments have no direct ability to regulate the single provisions of municipal law. As a result, terms such as code, ordinance, or regulation, if not simply law are more common.

The Oxford English Dictionary indicates that the origin of the current modern use of the word is not clear.[1] One possibility is the earliest use of the term, which originates from the Viking town law in the Danelaw, wherein by is the Old Norse word for a larger settlement as in Whitby and Derby (compare with the modern Danish-Norwegian word by meaning town, or the modern Swedish word by, meaning village).[1] However, it is also possible that this usage was forgotten and the word was "reinvented" in modern times through the use of the adverbial prefix by- giving the meaning of subsidiary law or side-law (as in byway).[1] In either case, it is incorrect to claim that the origin of the word is simply the prepositional phrase "by law."

Municipal by-laws are public regulatory laws which apply in a certain area. The main difference between a by-law and a law passed by a national/federal or regional/state body is that a bylaw is made by a non-sovereign body, which derives its authority from another governing body, and can only be made on a limited range of matters. A local council or municipal government gets its power to pass laws through a law of the national or regional government which specifies what things the town or city may regulate through bylaws. It is therefore a form of delegated legislation.

Within its jurisdiction and specific to those areas mandated by the higher body, a municipal by-law is no different than any other law of the land, and can be enforced with penalties, challenged in court and must comply with other laws of the land, such as the country's constitution. Municipal bylaws are often enforcable through the public justice system, and offenders can be charged with a criminal offence for breach of a bylaw. Common bylaws include vehicle parking and stopping regulations, animal control, building and construction, licensing, noise, zoning and business regulation, and management of public recreation areas.

By section 94 of the Constitution of Japan, regional governments have limited autonomy and legislative powers to create by-laws. In practice, such powers are exercised in accordance with the Local Autonomy Law.

By-laws therefore constitute part of the legal system subordinate to the Japanese constitution. In terms of its mandatory powers and effective, it is considered the lowest of all legislation possible.

Such powers are used to govern the following;

(from the Japanese Wikipedia) 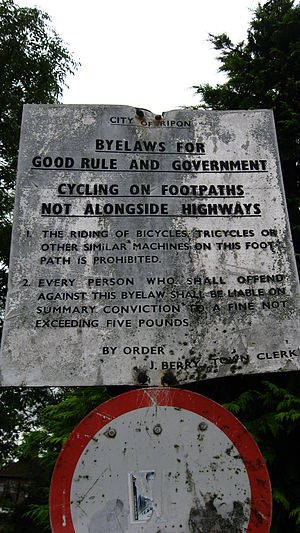 In the United Kingdom, byelaws are laws of local or limited application made by local councils or other bodies, using powers granted by an Act of Parliament, and so are a form of delegated legislation.

In Australian Law there are five types of by-law, and they are established by statute.

Corporate and organizational bylaws regulate only the organization to which they apply and are generally concerned with the operation of the organization, setting out the form, manner or procedure in which a company or organisation should be run. Corporate bylaws are drafted by a corporation's founders or directors under the authority of its Charter or Articles of Incorporation.

Bylaws widely vary from organization to organization, but generally cover topics such as the purpose of the organization, who are its members, how directors are elected, how meetings are conducted, and what officers the organization will have and a description of their duties. A common mnemonic device for remembering the typical articles in bylaws is NOMOMECPA, pronounced "No mommy, see pa!"[9] It stands for Name, Object, Members, Officers, Meetings, Executive board, Committees, Parliamentary authority, Amendment.[9][10] Organizations may use a book such as Robert's Rules of Order Newly Revised for guidelines on the content of their bylaws.[11] This book has a sample set of bylaws of the type that a small, independent society might adopt.[12]

Usually one of the last sections in the bylaws describes the procedures for amending them. It describes who can amend them (usually the membership, but it could be the organization's board of directors), how much notice is needed, and how much of a vote is needed. A typical requirement is a two-thirds vote provided that previous notice was given or a majority of all the members.[14]

Relation to other governing documents 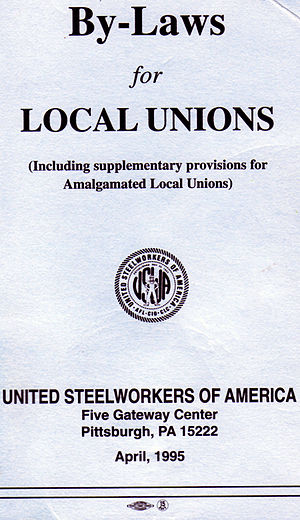 Cover of guideline document by United Steelworkers to form the basis of by-laws that may be adopted by a local union.

In parliamentary procedure, including Robert's Rules of Order, the bylaws are generally the supreme governing document of an organization, superseded only by the charter of an incorporated society.[15] The bylaws contain the most fundamental principles and rules regarding the nature of the organization.[15]

It was once common practice for organizations to have two separate governing documents, a constitution and bylaws, but this has fallen out of favor because of the ease of use, increased clarity, and reduced chance of conflict inherent in a single, unified document.[15] This single document, while properly referred to as the bylaws, is often referred to as a constitution or a constitution and bylaws.[15] Unless otherwise provided by law, the organization does not formally exist until bylaws have been adopted.[16]

In some countries, trade unions generally have constitutions, which govern activities of the international office of the union as well as how it interfaces with its locals. The locals themselves can set up their own bylaws to set out internal rules for how to conduct activities.

In other countries, such as the United Kingdom, union bylaws are sometimes a subset of the Union’s constitution or implement the union's rules in more detail.[17]