The Bykivnia Graves (Ukrainian: Биківнянські могили) is a National Historic Memorial on the site of the former village of Bykivnia (Ukrainian: Биківня, Russian: Быковня, Polish: Bykownia) on the outskirts of Kiev. During the Stalinist period in the Soviet Union, it was one of the unmarked mass grave sites where the NKVD, the Soviet secret police, disposed of thousands of executed "enemies of the Soviet state".

From the early 1920s until late 1940s throughout the Stalinist purges, the Soviet government hauled the bodies of tortured and killed political prisoners to the pine forests outside the village of Bykivnia and buried them in a grave that spanned 15,000 square metres (160,000 sq ft). So far, 210 separate mass graves have been identified by Polish and Ukrainian archaeologists working at the site. During the Soviet retreat in the early stages of the Operation Barbarossa, the Red Army troops levelled the village to the ground. The mass grave site was discovered by the Germans along with many other such sites throughout the Soviet Union. However, following the discovery of the Katyn massacre, the burial sites of Bykivnya was no longer part of German propaganda. After the Soviet recapture of the area in the course of the Second Battle of Kiev in 1943, the site was yet again classified by the NKVD. In the 1950s the village was reconstructed as a suburb of Kiev. In the 1970s the Soviet authorities planned to construct a large bus station on the mass grave site, but the plan was abandoned.

A document attesting to the origins of the Bykovnia victims was found by the Polish émigré historians in Nazi German archives after the war.[8] Polish researchers estimate that, apart from the Soviet victims of the Great Terror, the site might be the final resting place of 3,435 Polish officers captured by the Red Army during the Soviet invasion of Poland together with Nazi Germany in 1939, most of whom were executed in the spring of 1940 with over 20,000 Polish officers and intellectuals in the Katyn massacre.[2] However, as the Soviet authorities denied responsibility, there was no way to confirm that the victims of the Stalinist purges were indeed buried there. During the Soviet times the fact about the place was brought up to authorities numerous times with the most famous one in 1962, for which one of the Ukrainian poets, Vasyl Symonenko was beaten up by law enforcement agents and soon died in hospital from kidney failure.

It was not until the 1990s that the authorities of independent Ukraine confirmed the burial of thousands of victims there. On April 30, 1994, a large memorial to the victims of communism was opened in Bykivnia. Around the same time archaeological works started, with both Ukrainian and Polish scientists taking part. In 2001 the government of Viktor Yanukovych proclaimed the will to convert the Bykivnia woods into a State Historical-Memorial Complex "Graves of Bykivnia". The plan was brought to life by Viktor Yushchenko on May 17, 2006. In a step toward uncovering this part of Ukraine's history, Viktor Yushchenko became the first Ukrainian president to take part in the annual Day of Remembrance ceremony on May 21 to honor the estimated 100,000 people buried in the mass grave on the outskirts of Kiev. "We must know the truth. Why did our nation lose more than 10 million people without a war?" Yushchenko said during the 2006 event.[4] 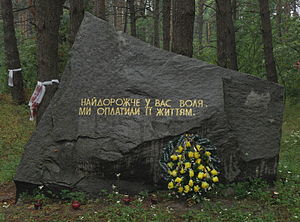 Since 2006 Polish researchers have found a number of bodies of Poles, prisoners killed in spring 1940 during the Katyn massacre. Apart from bodies, Polish researchers found everyday use things, such as a comb, on which the owner, an unknown Polish officer, carved several names, such as Franciszek Strzelecki, Ludwik Dworak and Szczyrad... (this potentially might be referring to Colonel Bronisław Mikołaj Szczyradłowski, deputy of commandant of Lwów's defense in September 1939). Also, a dog tag belonging to Sergeant Józef Naglik, soldier of the Skalat Battalion of the Border Defence Corps, was found on the spot. All the names belong to the "Ukrainian list" of Katyn massacre victims and serve as proof that Bykivnya is connected to the Katyn crime.[2]