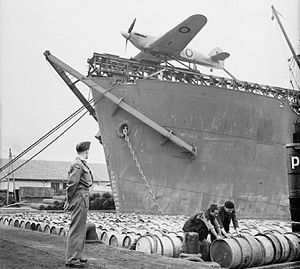 CAM ships were World War II-era British merchant ships used in convoys as an emergency stop-gap until sufficient escort carriers became available. CAM ship is an acronym for catapult aircraft merchant ship.[1] A CAM ship was equipped with a rocket-propelled catapult launching a single Hawker Hurricane, dubbed a "Hurricat" or "Catafighter". CAM ships continued to carry their normal cargoes after conversion. They are distinguished from Fighter catapult ships (FCS), which also carried catapult launched fighters, in that the CAM ship was a merchant vessel commanded and crewed by the Merchant Navy but the FCS was a merchant ship that had been commissioned as a warship and commanded and crewed by the Royal Navy. 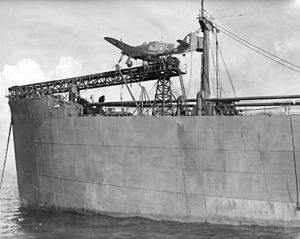 A Hurricane IA before launch during trials at Greenock, in 1941.

The German Luftwaffe had Focke-Wulf Fw 200 "Kondor" aircraft with a range of nearly 2,000 nautical miles. After the Fall of France, these aircraft could operate from western France against British merchant ships in the Atlantic. Flying from Bordeaux - Mérignac Airport, Fw 200s of I/KG40 could reach the convoy lanes west of Britain while staying outside the range of British land-based fighters. The Royal Navy had no aircraft carriers available to provide close air cover for the convoys. The Fw 200s could shadow convoys, directing U-boat attacks on them, or drop bombs on convoy ships, without opposition and to deadly effect.[1]

To counter this threat, the Admiralty developed the fighter catapult ship - a converted freighter, manned by a naval crew, carrying a single Hawker Hurricane fighter. When an enemy bomber was sighted, the fighter would be launched into the air with rockets, and fly up to destroy or drive away the bomber. (The Fw 200 was actually a rather vulnerable aircraft.) After the combat, the fighter pilot would bail out or ditch in the ocean near the convoy, and be picked up if all went well.[1]

The Admiralty had already experimented with this system. They ordered 50 rocket-propelled aircraft catapults to be fitted to merchant ships. The planes were Hurricane Mark Is, converted to Sea Hurricane IAs.[1]

The pilots for these aircraft were drawn from the Royal Air Force (RAF). The RAF formed the Merchant Ship Fighter Unit (MSFU) on 5 May 1941 in RAF Speke by the River Mersey in Liverpool.[1] Wing Commander E.S. Moulton-Barrett commanded the unit providing training for volunteer pilots, Fighter Direction Officers (FDOs), and airmen.[1] After training, MSFU crews were posted to Liverpool, Glasgow, or Avonmouth where they assisted in loading their Hurricanes onto the catapults.[1] Each team consisted of one pilot for Atlantic runs (or two pilots for voyages to Russia, Gibraltar, or the Mediterranean Sea), with one fitter, one rigger, one radio-telephone operator, one FDO, and a seaman torpedoman who worked on the catapult as an electrician.[1]

MSFU crews signed ship's articles as civilian crew members under the authority of the civilian ship's master.[1] The ship's chief engineer became responsible for the catapult, and the first mate acted as Catapult Duty Officer (CDO), responsible for firing the catapult when directed.[1] The single Hurricane fighter was launched only when enemy aircraft were sighted and agreement was reached via hand and flag signals between the pilot, CDO, and ship's master.[1]

The first four or five ships were taken into Royal Navy service as "Auxiliary Fighter Catapult Ships", and later conversions were officially named CAMs manned by merchant crews. The first CAM ship, Michael E, was sponsored by the Royal Navy while the RAF MSFUs were working up. After a trial launch off Belfast, Michael E sailed with convoy OB 327 on 28 May 1941. She was sunk by U-108 on 2 June.[2] The first RAF trial CAM launch was from Empire Rainbow, at Greenock on the River Clyde on 31 May 1941; the Hurricane landed at Abbotsinch.[1] Six CAM ships joined convoys in June 1941.[1] When a CAM ship arrived at its destination, the pilot usually launched and landed at a nearby airfield to get in as much flight time as possible before his return trip.[1] Pilots were rotated out of CAM assignments after two round-trip voyages to avoid the deterioration of flying skills from the lack of flying time during the assignment.[2]

CAM sailings were initially limited to North American convoys with aircraft maintenance performed by the Royal Canadian Air Force at Dartmouth, Nova Scotia. CAM ships sailed on Gibraltar and Freetown convoys beginning in September, 1941, after an aircraft maintenance unit was established at the RAF base at North Front, Gibraltar. No CAM aircraft were provided during January and February 1942 after it proved impossible to maintain the catapult-mounted aircraft in flying order during the North Atlantic winter. CAM sailings resumed on 6 March 1942 on North Atlantic convoys and in April on the Arctic Russian convoys with a RAF aircraft maintenance unit in Archangelsk.[2] 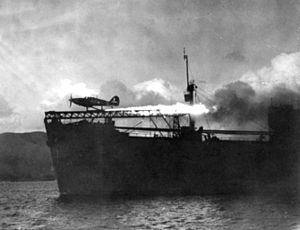 Test launch of a Hurricane at Greenock, Scotland, 31 May 1941

In total, there were nine combat launches. Eight aircraft and one pilot were lost for eight German aircraft destroyed and one damaged.

As adequate numbers of escort carriers became available, CAM sailings on North American and Arctic Russian convoys were discontinued in August 1942. The aircraft maintenance unit was withdrawn from Archangel in September 1942. Catapults were removed from ten of the 26 surviving CAM ships while the remaining 16 continued to sail with the Mediterranean and Freetown convoys.[2] Headquarters RAF Fighter Command ordered all MSFUs to be disbanded commencing 8 June 1943.[1] The combat launches from homeward bound convoy SL 133 were from the last two operational CAM ships to sail, the last MSFU was disbanded 7 September 1943.[1] Twelve of the 35 CAM ships had been sunk while sailing on 170 round trip voyages.[1] Two more ships, Cape Clear and City of Johannesburg, were briefly fitted with dummy catapults and aircraft for deception purposes in late 1941.[5]