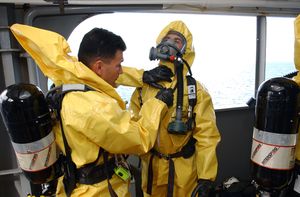 A CBRN incident differs from a hazardous material incident in both scope (i.e., CBRN can be a mass casualty situation) and intent. CBRN incidents are responded to under the assumption that they are intentional and malicious; evidence preservation and perpetrator apprehension are of greater concern than with HAZMAT incidents.

A 2011 forecast concluded that worldwide government spending on CBRN defence products and services would reach US$8.38bn that year.[1]

In English the term CBRN is a replacement for the cold war term NBC (nuclear, biological, and chemical), which had replaced the term ABC (atomic, biological, and chemical) that was used in the fifties. The addition of the R (for radiological) is a consequence of the "new" threat of a radiological weapon (also known as "dirty bombs"), in addition to end the joke among members of the Chemical Corps which called "NBC as NoBody Cares"[citation needed]. In the new millennium, the term CBRNe was introduced as an extension of CBRN - the e in this term representing the enhanced (improvised) explosives threat.[2] Leaders and members of the Chemical Corps also use CBRN as "Could Be Right Now".[3]

By country or region

The term CBRN is in common use in disaster and emergency services organizations across the country.[4] Since July 2005, the Canadian Forces also started using the term CBRN Defence, instead of NBC Defence, due to the increased threat of dirty bomb use (which is radiological in nature). CBRNe is a new term that is being used in both civilian and military organisations. The Canadian Joint Incident Response Unit is a Canadian Forces unit, under the direction of the Canadian Special Operations Forces Command, charged with supporting "the Government of Canada in order to prevent, control and mitigate CBRN threats to Canada, Canadians and Canadian interests."

The Ontario Provincial Police's UCRT (Urban Search & Rescue / CBRNe Response Team) is a specialized team responsible for CBRNe incident response for the province of Ontario. The team was formed in 2002 and was called the Provincial Emergency Response Team (PERT) until 2010, when the name was changed to UCRT.[citation needed] They changed from Provincial Emergency Response Team to UCRT due to the elimination of Tactical and concentrating on USAR and CBRN and explosive disposal. Under the direction of specialist Staff Sergeant Jim Bock, UCRT became the Provinces elite response to anti terrorism.

Hong Kong has had CBRN response capabilities since the early 1990s and advanced training from 1998.[6] The Standing CBRN Planning Group (known as the SRPG) plans for all CBRN incidents in Hong Kong. The SRPG was set up with the support of the Secretary for Security by the Senior Bomb Disposal Officer in Hong Kong, Dominic Brittain.[7] It consists of representatives from 9 government departments who plan the response to CBRN threats. These departments include Police EOD, Fire Services, the Hospital Authority and the Department of Health, amongst others.The operational arm of the SRPG is the CBRN Incident Advisory Group (RIAG) who form up in the initial stages of a CBRN incident using telephone conferencing. RIAG consists of five experts who assist with the technical response to the incident by providing real time advice and support to the departments involved. The Hong Kong capability is well rehearsed, with regular departmental exercises conducted and a full scale CBRN exercise conducted every year.[8]

The Indian Army ordered 16 CBRN monitoring vehicles, of which the first 8 were inducted in December 2010. It was developed by the Defence Research and Development Organisation (DRDO) and manufactured by Ordnance Factories Board.[9] 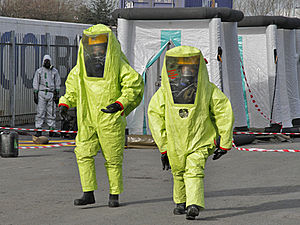 The Irish Defence Forces have CBRNe training and equipment capabilities – in particular the Ordnance Corps (Explosive Ordnance Disposal/EOD teams), Engineer Corps and Army Ranger Wing (ARW) – and will aid the civil authority if requested. The Irish Army runs CBRNe defence courses, and has detection equipment, decontamination equipment and is reported to have purchased 10,000 protective CBRN/NBC suits, enough for all of its personnel.[10]

The Irish national police force, the Garda Síochána, has a number of nationwide CBRN response teams. The teams are based regionally (in six regions; Dublin, Eastern, Northern, Southern, South-Eastern & Western) and began operating from 2004 with 100 trained officers (170 responders trained throughout the country as of 2009). There is a requirement for members to be re-certified within 18 months of training.[11][12] CBRN response teams are trained by the Garda Tactical Training Unit, and supported nationally by the Emergency Response Unit (ERU).[13] Other emergency services also have limited CBRN expertise, such as the Health Service Executive (HSE) and Dublin Fire Brigade (DFB), who have a Hazardous Materials (Haz-Mat) and Chemical Incident Unit.

The Spanish Army 1st CBRN Regiment 'Valencia' was formed in March 2005.Training in the defence against CBRN agents as part of combat support is the main aim of exercise 'Grifo' (Griffin) – the most important of this type that the Army undertakes. The National Police and the Spanish Civil Guard have their own CBRN units. The Military Emergencies Unit and emergency services have CBRN training.[16] [17]

CBRN is also used by the UK Home Office as a civil designation.[18] Police, fire and ambulance services in the UK must all have some level of CBRN providers. Within the ambulance service this is performed by the Hazardous Area Response Team (HART) and Special Operations Response Team (SORT). Since the introduction of new equipment to UK fire services under the New Dimension programme, CBRN decontamination of personnel (including members of the public) has become a task carried out by fire services in the UK and they regularly train for such scenarios.

The USN requires all personnel to take a web-based CBRNE training annually to get a basic understanding of facts and procedures related to responding to a CBRNE incident.

In May 2012, BioPrepWatch reported that the Russian security service ordered over 100 "capsule cradles", which are devices that people can use to protect infants or even small pets in the event of a nuclear, chemical, biological, or radiological threat. According to the article, Soviet military engineers invented the capsules in the 1960s. A company is currently producing the capsules in a factory in Russia.[19]

Numbers vary, but news reports and market forecast reports place the market for CRBN products in 2013 and 2014 between $8.7-8.8 billion.[20][21] The market for CBRN products is expected to grow to over $13 billion by the year 2023.[20] CBRN manufacturers include Argon Electronics, Blucher GmbH, Bruker, FLIR Systems, HDT Global, MSA, Research International, and TSI.