Cable radio or cable FM is a concept similar to that of cable television, bringing radio signals into homes and businesses via coaxial cable. It is generally used as cable TV was in its early days when it was "community antenna television", to enhance the quality of terrestrial radio signals that are difficult to receive in an area. However, cable-only radio outlets also exist.

The use of cable radio varies from area to area — some cable TV systems don't include it at all, and others only have something approaching it on digital cable systems. Additionally, some stations may just transmit audio in the background while a Public-access television cable TV channel is operating in between periods of video programming. In the late 1970s to the mid to late 1980s, before the advent of MTS Stereo television broadcasts, cable TV subscribers would tune in specific cable FM frequencies that simulcast the television broadcasts in stereo.

A related secondary meaning of the term is any automated music stream — the usual format of cable only "stations".

The first "commercial" cable radio station in the United States was CABL-FM 108, on the Theta Cablevision system, serving West Los Angeles, California and surrounding areas. It went on the air January 1, 1972, and was run by Brad Sobel, playing what he called "progressive top 40". CABL-FM 108 came into being after Brad's original venture, K-POT, a bootleg FM station at 88.1 MHz was busted by the FCC in November 1971. The illicit station ran for three days until it was shut down, and the event made the front page of the Los Angeles Times and the Herald-Examiner. Because Theta Cablevision charged extra for their FM hookups, CABL-FM 108's potential audience was between 4,700 and approximately 25,000 (based on information provided by Brad Sobel in an article in Billboard), out of Cablevision's approximately 100,000 subscriber households 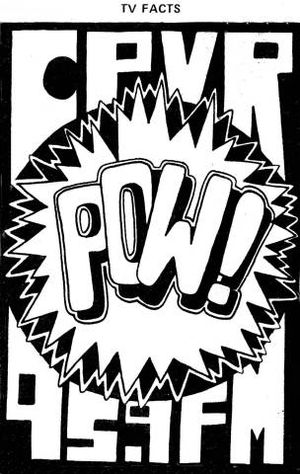 The first exclusively cablecasting community radio station was CPVR in Palos Verdes, California, a suburb of Los Angeles. CPVR 95.9 Cable FM radio was on the Times-Mirror cable system and was started by a group of teenagers who initially practiced being disc jockeys in the homes of two of the founders. Since traditional broadcasting equipment was prohibitively expensive at the time, a young engineer named Tom Hewitt built much of the electronic hardware from scratch.

Mark Speer and Brad Gardner were the two who began the venture, which was run as a non-profit youth organization from a studio in the Golden Cove shopping center in Rancho Palos Verdes beginning in March 1972. Even though they were non-profit, they were not subject to the restrictions of terrestrial public radio stations, and thus were able to subsidize expenses by accepting commercial advertising.

Because the air staff and audience were part of a highly desirable demographic (many of the DJs weren’t even old enough to drive), advertisers of the day, such as concert promoter Pacific Presentations and local record stores eagerly bought ad time in order to reach such a prime demographic (m-f, 13-24) as CPVR had attracted during its history, further enabling CPVR to not only continue operations, but expand into larger studios.

Greg McClure aka Isaac O. Zzyzx, Jim Sideris, Harv Laser, David Zislis, Richard Hower, Tony Fasola, Dave Chrenko aka Johnny Ace, Kerry Doolin, Liane Benson, Lorraine Dechter, Clyde Stanton aka CertifiedClyde and Kathy Bauer were some of the young disc jockeys who helped create the station’s legendary style and sound. Unlike Cable 108, CPVR was not only on the FM dial, but was in stereo, and also appeared on the cable system's "barker" channel (Channel 3).

Although the station was only on the "cable" for about two years programming free-form rock and roll, CPVR often scooped it’s over-the-air competitors, breaking acts such as Bruce Springsteen and Queen and often premiering landmark albums such as Pink Floyd’s Dark Side of the Moon” and Procol Harum’s “Grand Hotel” sometimes several weeks before the L.A. stations picked them up.

Many of the original staff went on to careers in media (co-founder Brad Gardner has since been nominated for four (and won two) Emmys, one for a music video "The Doctor is In" and the other for the veterinary show "Horse Vet". His other two nominations are for directing and audio). For those involved and those who heard it, this tiny little community rock and roll radio station holds a special place in their hearts and minds, often discussed in the same breath as KMET, KPPC, KWST, KRLA, KROQ-FM and KNAC, legendary southern California radio stations in their own right.

On the East Coast the most popular commercial cable radio station was WLHE, started in 1979 in Woburn, Massachusetts. This station was the first commercial cable TV only radio station in the country and ran from 1979 to 1987. The man who started it was Larry Haber, owner and operator. Frank Palazzi and Alan Rupa were the first on air disc jockeys. Palazzi was known on the air as Frank Fitz, and Alan Rupa was known as Alan James. Mr Haber went by his own name. Other DJs were Jim Fronk (aka Jim Jacobs), oldies expert Chuck Steven, country music expert Glen Evans, indie rock expert Mark Sawyer, and jazz expert Scott Cavanagh (aka Scott Rogers). Larry Haber was the stations first president and general manager, Palazzi served as program director, and Rupa was music director. The station was heard only on Continental Cablevision's local Channel 6 in Woburn, Wilmington, Stoneham, North Reading, and Billerica, Massachusetts.

In Canada, the Canadian Radio-television and Telecommunications Commission previously required most cable companies to provide cable FM service; those that did were required to convert all local AM broadcast radio stations to cable FM signals. The commission now requires only that campus, community, native radio stations, and one CBC Radio station in each official language, be provided by local cable companies, either via cable FM or via digital means (i.e. set-top boxes).[1][2] Rogers Communications, notably, has entirely abandoned traditional cable FM distribution, instead providing a number of terrestrial radio services as part of its digital cable audio package.

In the former Soviet Union, cable radio was popular and Radio Rossii is reported to have had as many as forty million listeners.[3]

Initially the system had one channel that was transmitted as direct audio. The wires and plugs for the system were the same as for standard power wires and plugs which could cause receivers to burn out by attaching to mains socket. During World War II, all RF receivers were confiscated[citation needed], but cable radio continued operating and, in particular, was used to transmit warnings of aerial bombing. The 1960s saw an enhancement with the addition of two additional channels, using AM on carrier frequencies of 78 and 120 kHz. The installation of this system became mandatory for all new buildings. The system, along with usual broadcasting, was created to inform people of emergencies.

Today, cable radio outlets are installed in all new homes, but many people don't use them or even uninstall the socket and wires inside their units. However, they continue to pay the mandatory fee (as of 2009, the price in Moscow is approx. 0,7 EUR per month). These payments can be avoided, but due to bureaucratic procedure it is rarely used.[further explanation needed]

North Korea has had a cable radio system sometimes referred to as the 'Third Radio' since the 1940s and it was declared that all cities and villages had been reached by the service in 1975.

Operated by the North Korean Ministry of Communications and focusing on music, news, and educational programs. The 'Third Radio' has been mandatory in new apartment blocks since the 1980s and is present in some offices and loud speakers posted in public places.[4]

The earliest cable-only radio stations in the United Kingdom was Radio Thamesmead in Thamesmead, South East London and Radio Swindon Viewpoint in Swindon, Wiltshire. Cable relays of early BBC stations (in areas where direct reception was poor) dates back to the late 1920s.

Rediffusion Singapore was a popular cable radio service on the island from 1949-1980's, which broadcast in English and Chinese. It's now a subscription digital radio service, broadcasting on DAB+.