From Infogalactic: the planetary knowledge core
Jump to: navigation, search
"Caddo County" redirects here. For the parish in Louisiana, see Caddo Parish, Louisiana.
Not to be confused with Caddo, Oklahoma.

Caddo County is a county located in the U.S. state of Oklahoma. As of the 2010 census, the population was 29,600.[1] Its county seat is Anadarko.[2] Created in 1901 as part of Oklahoma Territory, the county is named for the Caddo tribe who were settled here on a reservation in the 1870s. Caddo County is immediately west of the seven-county Greater Oklahoma City metro area, and although is not officially in the metro area, it has many economic ties in this region.

Caddo County was organized on August 6, 1901, when the Federal Government allotted the Kiowa, Comanche and Arapaho reservations and sold the surplus land to white settlers.[3] The reservation land was part of Oklahoma Territory until Oklahoma became a state on November 16, 1907. Part of its land was taken at statehood to form neighboring Grady County. Some additional land was taken in 1911 and also awarded to Grady County.[3]

Agriculture has been the mainstay of the local economy since its founding. The main crops were cotton, corn, wheat, alfalfa, broom corn, and kaffir corn. Poultry and livestock production have also been important. By 1960, Caddo County ranked first in Oklahoma for producing of peanuts, hogs and poultry.[3]

The first oil field (Cement Field) in the county was discovered in 1911, and oil production has remained important to the county economy since then. Smaller-scale booms in oil production occurred in the 1960s, 1970s and 1980s.[3]

According to the U.S. Census Bureau, the county has a total area of 1,290 square miles (3,300 km2), of which 1,278 square miles (3,310 km2) is land and 12 square miles (31 km2) (0.9%) is water.[4] The county mostly lies in the Gypsum Hills and the Red Bed plains physiographic areas. The extreme southwestern corner is in the Wichita Mountains. The county is drained by the Washita River and Pond and Sugar Creeks. Major reservoirs are Chickasha Lake, Ellsworth Lake, and Fort Cobb Lake,[3] Red Rock Canyon State Park near Hinton is notable for having the only remaining stand of native Caddo maple trees. 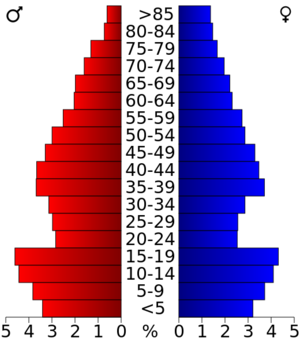 Age pyramid for Caddo County, Oklahoma, based on census 2000 data.

There is also one winery and vineyard in the county (Woods and Waters Winery and Vineyard). 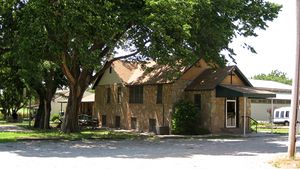 The following sites in Caddo County are listed on the National Register of Historic Places: