Caleb Cushing (January 17, 1800 – January 2, 1879) was an American diplomat who served as a U.S. Congressman from Massachusetts and Attorney General under President Franklin Pierce.

Born in Salisbury, Massachusetts, in 1800, he was the son of John Newmarch Cushing, a wealthy shipbuilder and merchant, and of Lydia Dow, a delicate and sensitive woman from Seabrook, New Hampshire, who died when he was ten. The family moved across the Merrimack River to the prosperous shipping town of Newburyport in 1802. He entered Harvard University at the age of 13 and graduated in 1817. He was a teacher of mathematics there from 1820 to 1821, and was admitted to practice in the Massachusetts Court of Common Pleas in December, 1821. He began practicing law in Newburyport in 1824. There he attended the First Presbyterian Church.

Cushing served as a Democratic-Republican member of the Massachusetts House of Representatives in 1825, then entered the Massachusetts Senate in 1826, and returned to the House in 1828. Afterwards, he spent two years, from 1829 to 1831, in Europe. Upon his return, he again served in the lower house of the state legislature in 1833 and 1834. Then, in late 1834, he was elected a representative to Congress.

Here the marked inconsistency characterizing his public life became manifest; for when John Tyler had become president, had been read out of the Whig party, and had vetoed Whig measures (including a tariff bill), for which Cushing had voted, Cushing first defended the vetoes and then voted again for the bills. In 1843 President Tyler nominated Cushing for U.S. Secretary of the Treasury, but the U.S. Senate refused to confirm him for this office. John Canfield Spencer was chosen instead.

Cushing was, however, appointed by President Tyler, later in the same year, to be commissioner and United States Ambassador to China, holding this position until March 4, 1845. In 1844 he negotiated the Treaty of Wang Hiya, the first treaty between China and the United States. While serving as commissioner to China he was also empowered to negotiate a treaty of navigation and commerce with Japan. 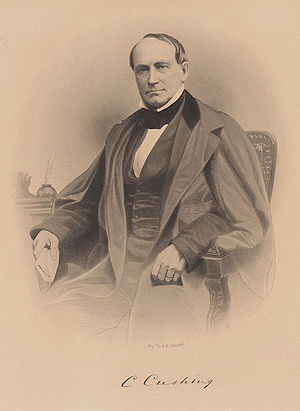 In 1847, while again a representative in the Massachusetts state legislature, he introduced a bill appropriating money for the equipment of a regiment to serve in the Mexican–American War; although the bill was defeated, he raised the necessary funds privately.

He served in the Army during the Mexican War first as colonel of the 1st Massachusetts Volunteer Regiment, of which he was placed in command on January 15, 1847. He was promoted to brigadier-general of volunteers on April 14 of the same year. He did not see combat during this conflict, and entered Mexico City with his reserve battalion several months after that city had been pacified. He was discharged from the Army on July 20, 1848.

In 1847 and again in 1848 the Democrats nominated him for Governor of Massachusetts, but on each occasion he was defeated at the polls. He was again a representative in the state legislature in 1851, was offered the position as Massachusetts Attorney General in 1851, but declined; and served as mayor of Newburyport, Massachusetts, in 1851 and 1852. (He had written a major history of the town when he was 26 years old.)

He became an associate justice of the Massachusetts Supreme Judicial Court in 1852, and during the administration of President Franklin Pierce, from March 7, 1853, until March 3, 1857, was 23rd Attorney General of the United States. Cushing, a "doughface", i.e., a Northerner with Southern sympathies, supported the Dred Scott decision and to such a degree that Chief Justice Roger B. Taney, who wrote the decision, wrote Cushing a letter thanking him for his support.

In 1860 he presided over the Democratic National Convention, which met first at Charleston and later at Baltimore, until he joined those who seceded from the regular convention; he then presided also over the convention of the seceding delegates, who nominated John C. Breckinridge for the Presidency. Also in 1860 President James Buchanan sent him to Charleston as Confidential Commissioner to the Secessionists of South Carolina.

Despite having favored states' rights and opposed the abolition of slavery, during the American Civil War, he supported the Union. He was later appointed by President Andrew Johnson as one of three commissioners assigned to revise and codify the laws of the United States Congress. He served in that capacity from 1866 to 1870.

In 1868, in concert with the Minister Resident to Colombia, Cushing was sent to Bogotá, Colombia, and worked to negotiate a right-of-way treaty for a ship canal across the Isthmus of Panama. 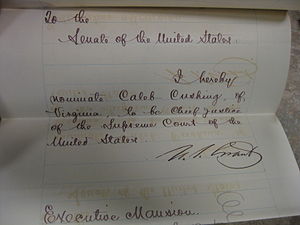 From January 6, 1874, to April 9, 1877, Cushing was Minister to Spain. He defused tensions over the Virginius Affair, and proved popular in the country.

On January 9, 1874, Grant nominated him for Chief Justice of the United States, but in spite of his great learning and eminence at the bar, his anti-war record and the feeling of distrust experienced by many members of the U.S. Senate on account of his inconsistency, aroused such vigorous opposition that his nomination was withdrawn on January 13, 1874.[citation needed]

An acute attack of erysipelas in July 1878 was a warning that his end was nearing. He died January 2, 1879, at Newburyport, Massachusetts, just 15 days shy before his 79th birthday, and is buried in Highland Cemetery in that city.[1]

The United States Revenue Cutter Caleb Cushing was named after Cushing. The Caleb Cushing served during the American Civil War and was destroyed by Confederate raiders during the Battle of Portland Harbor on June 27, 1863.