The caloric theory is an obsolete scientific theory that heat consists of a self-repellent fluid called caloric that flows from hotter bodies to colder bodies. Caloric was also thought of as a weightless gas that could pass in and out of pores in solids and liquids. The "caloric theory" was superseded by the mid-19th century in favor of the mechanical theory of heat but nevertheless persisted in scientific literature until the end of the 19th century.[1] 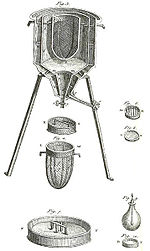 The world’s first ice-calorimeter, used in the winter of 1782-83, by Antoine Lavoisier and Pierre-Simon Laplace, to determine the heat involved in various chemical changes; calculations which were based on Joseph Black’s prior discovery of latent heat. These experiments mark the foundation of thermochemistry.

There is one version of the caloric theory that was introduced by Antoine Lavoisier. Lavoisier developed the explanation of combustion in terms of oxygen in the 1770s. In his paper "Réflexions sur le phlogistique" (1783), Lavoisier argued that phlogiston theory was inconsistent with his experimental results, and proposed a 'subtle fluid' called caloric as the substance of heat.[2] According to this theory, the quantity of this substance is constant throughout the universe,[citation needed] and it flows from warmer to colder bodies. Indeed, Lavoisier was one of the first to use a calorimeter to measure the heat changes during chemical reaction.

Since heat was a material substance in caloric theory, and therefore could neither be created nor destroyed, conservation of heat was a central assumption.[3]

The introduction of the caloric theory was also influenced by the experiments of Joseph Black related to the thermal properties of materials. Besides the caloric theory, another theory existed in the late eighteenth century that could explain the phenomenon of heat: the kinetic theory. The two theories were considered to be equivalent at the time, but kinetic theory was the more modern one, as it used a few ideas from atomic theory and could explain both combustion and calorimetry.

Quite a number of successful explanations can be, and were, made from these hypotheses alone. We can explain the cooling of a cup of tea in room temperature: caloric is self-repelling, and thus slowly flows from regions dense in caloric (the hot water) to regions less dense in caloric (the cooler air in the room).

We can explain the expansion of air under heat: caloric is absorbed into the air, which increases its volume. If we say a little more about what happens to caloric during this absorption phenomenon, we can explain the radiation of heat, the state changes of matter under various temperatures, and deduce nearly all of the gas laws.

Sadi Carnot developed his principle of the Carnot cycle, which still forms the basis of heat engine theory, solely from the caloric viewpoint.

However, one of the greatest confirmations of the caloric theory was Pierre-Simon Laplace's theoretical correction of Sir Isaac Newton’s calculation of the speed of sound. Newton had assumed an isothermal process, while Laplace, a calorist, treated it as adiabatic.[4] This addition not only substantially corrected the theoretical prediction of the speed of sound, but also continued to make even more accurate predictions for almost a century afterward, even as measurements of the index became more precise.

In 1798, Count Rumford published An Experimental Enquiry Concerning the Source of the Heat which is Excited by Friction, a report on his investigation of the heat produced while manufacturing cannons. He had found that boring a cannon repeatedly does not result in a loss of its ability to produce heat, and therefore no loss of caloric. This suggested that caloric could not be a conserved "substance" though the experimental uncertainties in his experiment were widely debated.

His results were not seen as a "threat" to caloric theory at the time, as this theory was considered to be equivalent to the alternative kinetic theory.[5] In fact, to some of his contemporaries, the results added to the understanding of caloric theory. 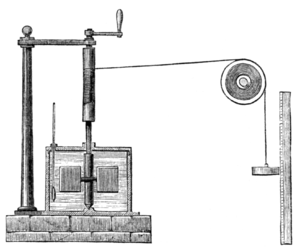 Joule's apparatus for measuring the mechanical equivalent of heat.

Rumford's experiment inspired the work of James Prescott Joule and others towards the middle of the 19th century. In 1850, Rudolf Clausius published a paper showing that the two theories were indeed compatible, as long as the calorists' principle of the conservation of heat was replaced by a principle of conservation of energy. In this way, the caloric theory was absorbed into the annals of physics, and evolved into modern thermodynamics, in which heat may formally be put equivalent to kinetic energy of some particles (atoms, molecules) of the substance. However, there is a principal difference between the concept of heat and a mechanical movement of particles, which shows in spectroscopy. While sharp spectral lines correspond to mechanical movements of the particles, the heat shows spectroscopically as a noise with some spectral distribution[citation needed].

In later combination with the law of energy conservation, the caloric theory still shows a very valuable physical insight into some aspects of heat. For example, the emergence of Laplace's equation and Poisson's equation in the problems of spatial distribution of heat and temperature. The caloric theory is now also remembered for the naming of the calorie.[citation needed]