The Cameroon Air Force (Armée de l'Air du Cameroun) theoretically possesses a fairly well balanced force of relatively unsophisticated aircraft, although many of these are now ageing and serviceability levels are likely to be low. Emphasis is placed on transport and utility operations in support of ground forces. Combat capability is modest and restricted to a few armed trainers that can be used for ground attack, COIN and close air support roles. Six Atlas Impala jet trainers purchased from South Africa in 1997 had a lengthy gestation period before becoming operational and did not enter service until late 1998. None of the Impalas are currently in service. Apart from a few ultralight aircraft, these are the most recent additions to the inventory. Cameroon's air arm lacks training aircraft and has also experienced a significant decline in transport assets, most recently involving the 2001 grounding of the remaining three DHC-5D Buffalo aircraft. As with other regional air forces, few aircraft have been procured since the end of the oil boom in the early 1980s and the burden is beginning to show on equipment that is now at least two decades old.

The air force includes three main aerial bases, in Yaoundé, Douala, and Garoua. The air force staff is divided between these three bases, located within each military region. The Yaoundé base is a helicopter and liaison platform; the Douala base is a logistical and tactical transport platform; the Garoua base is an attack and training platform. The first two bases are timeworn. There are no stopping systems, no radio-navigation installations, and no lighting apparatus. No major investment has been made for a long time. The Garoua base is the more modern and the best equipped and "conforms" to NATO standards having been built by the Germans, following an invitation to tender. The PANVR[1] (Pole Aeronautique National a Vocation Regionale) is located on this base. Large aeroplanes can land easily on this base. However, the site is not well maintained.

The Koutaba aerodrome is home to the Bataillon des Troupes Aeroportees (BTAP).

Finally, the Bamenda aerodrome could become a fourth aerial base, with the stationing of the airborne rifle commandos (fusiliers commando de l’air – BAFUSCO AIR): currently 60 people under the command of a lieutenant colonel assisted by eight officers work at the site. Such a deployment is large by Cameroonian standards.

Currently, the air force has 6 Dassault/Dornier Alpha Jets (2 are currently inoperable) as attack aircraft; 3 Lockheed C-130 Hercules and 1 Aérospatiale SA 330 Puma transport aircraft, 1 Piper PA-23, 1 Aérospatiale Alouette II, 2 Joker 300, 7 Humbert Tétras for training and 2 Bell 206 as observation and liaison aircraft. The independently operated Presidential aerial squadron has 1 Grumman Gulfstream III, 1 Aérospatiale Dauphin and 1 Aérospatiale Super Puma, which are not part of air force equipment. Maintenance of aircraft of this squadron is better than for those of the air force.

Basic training for airmen is provided at Koutaba. Non-commissioned officers and officers undergo training at the PANVR, which is also a regional school where pilots from other African countries can train. The purpose of the school is to prepare them for the examination for the French air school (CSEA) in Salon-de-Provence. However, Cameroonian pilot officers also undergo training in other countries such as Morocco and the USA.

The Cameroon Air Force has the following rank structure:[2] 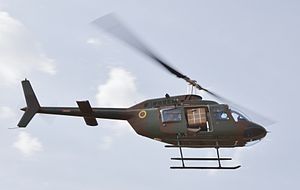 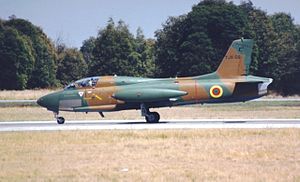 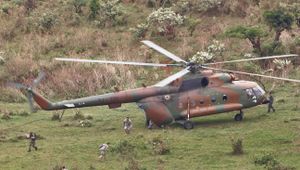