From Infogalactic: the planetary knowledge core
Jump to: navigation, search
Not to be confused with Canadian, Oklahoma.

Canadian County is a county located in the U.S. state of Oklahoma. As of the 2010 census, the population was 115,541,[1] making it the fifth-most populous county in Oklahoma. Its county seat is El Reno.[2] The county is named for the Canadian River.[3]

In 1859, the U.S. Government moved the Caddo of Louisiana from its Brazos reservation in Texas to what would eventually become Canadian County, Oklahoma. Showetat, the last hereditary chief of the Caddos set up his camp near the present Union City, and is considered Canadian County's first permanent resident.[4] The Wichita tribe were relocated to the same part of Indian Territory in 1861. The Treaty of Medicine Lodge gave the land west of the Caddos and Wichitas to the Cheyenne and Arapaho tribes, They moved from Colorado in 1869. The Cheyenne-Arapaho Agency was established in 1870.

Canadian County was formed in 1889 as County Four of Oklahoma Territory.[4] It was named after the Canadian River, which runs through the county, and settled by white settlers after the April 22, 1889, land run that opened up Native American land.[4] It was expanded by a second land run in 1892.[4]

The county was where the last great battle between the Cheyenne, Arapaho and the United States Army took place. 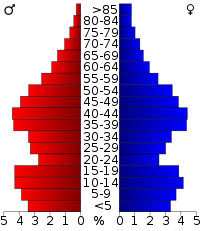 Age pyramid for Canadian County, Oklahoma, based on census 2000 data[11]

The following sites in Canadian County are listed on the National Register of Historic Places: