The Canadian Shift is a chain shift of vowel sounds found primarily in Canadian English, but also possibly in some other dialects (for example, younger Pacific Northwest English).[1] It was first described by Clarke, Elms and Youssef in 1995,[2] based on impressionistic analysis. The shift is structurally identical to the movement of front vowels in the California Shift of California English; whether this a coincidence or not is not yet clear.[1][3][4]

It is triggered by the cot–caught merger: /ɒ/ (as in cot) and /ɔ/ (as in caught) merge as [ɒ], a low back rounded vowel.[5] As each space opens up, the next vowel along moves into it. Thus, the short a /æ/ retracts from a near-low front position to a low central position, with a quality similar to the vowel heard in Northern England [a]. The retraction of /æ/ was independently observed in Vancouver[6] and is more advanced for Ontarians and women than for people from the Prairies or Atlantic Canada and men.[7]

However, scholars disagree on the behaviour of /ɛ/ and /ɪ/: 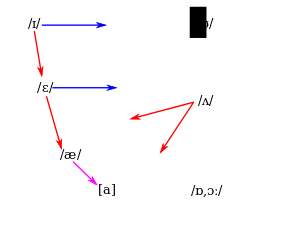 The Canadian Shift according to Clarke (red), Boberg (blue), and both (purple)

Related phenomena in the U.S.

Most U.S. speakers with the cot–caught merger appear not to undergo the Canadian shift in part because typically in the U.S. the merged vowel is less rounded and/or less back and slightly lower than the Canadian vowel, and therefore less room would be left for the retraction of /æ/.

In the Western U.S., one in four Western speakers in the Atlas of North American English exhibit the Canadian Shift, as defined quantitatively by Labov et al. based on the formant values for /æ/, /ɒ/, and /ɛ/.

The California Shift in progress in California English contains the features of the Canadian Shift; the two phenomena may however be different, since in California the retraction of /æ/ has occurred even though Californian /ɒ/ is more centralized and less rounded than Canadian /ɒ/.[12]

In Pittsburgh, where cot and caught are merged to a back rounded vowel, the mouth vowel /aʊ/ is traditionally a monophthong [äː] that fills the low central space, thus preventing /æ/ from retracting. Among younger speakers, however, /æ/ begins to move backward as the monophthongization of /aʊ/ declines.[13]

Durian (2008),[14] via instrumental analysis, found evidence of the Canadian Shift in the vowel systems of men born circa 1965 and later in Columbus, Ohio, a city located within the U.S. Midland. /ʌ/ is undergoing fronting without lowering, while still remaining distinct from the space occupied by /ɛ/. At the same time, historical /ɑː/ (the vowel in "father") is merged with the /ɒ/ class. This allows a "free space" for the retraction of /æ/, a possibility also suggested for Western U.S. dialects being potentially capable of showing the Canadian Shift by Boberg (2005). In Columbus, the Canadian Shift closely resembles the version found by Boberg (2005) in Montreal, where /ɒ/ and /ɔː/ are either merged or "close," /æ/ shows retraction of the nuclei (as well as "rising diphthong" behavior—i.e., ingliding with a lower nucleus than the glide), and /ɛ/ as well as /ɪ/ show retraction of the nucleus. (However, the retraction of /ɪ/ was not found among all speakers, and is more mild among the speakers that do show it than the retraction of /ɛ/ among those speakers. Also, the outcome of low back merger-like behavior is more like the California Shift outcome noted above than the rounded variant found in Canada.)