Canon law is the body of laws and regulations made by ecclesiastical authority (Church leadership), for the government of a Christian organization or church and its members. It is the internal ecclesiastical law governing the Catholic Church (both Latin Church and Eastern Catholic Churches), the Eastern and Oriental Orthodox churches, and the individual national churches within the Anglican Communion.[1] The way that such church law is legislated, interpreted and at times adjudicated varies widely among these three bodies of churches. In all three traditions, a canon was originally a rule adopted by a church council; these canons formed the foundation of canon law.

Canons of the Apostles

Main article: Canons of the Apostles

The Apostolic Canons[3] or Ecclesiastical Canons of the Same Holy Apostles[4] is a collection of ancient ecclesiastical decrees (eighty-five in the Eastern, fifty in the Western Church) concerning the government and discipline of the Early Christian Church, incorporated with the Apostolic Constitutions which are part of the Ante-Nicene Fathers In the fourth century the First Council of Nicaea (325) calls canons the disciplinary measures of the Church: the term canon, κανὠν, means in Greek, a rule. There is a very early distinction between the rules enacted by the Church and the legislative measures taken by the State called leges, Latin for laws.[5]

In the Catholic Church, canon law is the system of laws and legal principles made and enforced by the Church's hierarchical authorities to regulate its external organization and government and to order and direct the activities of Catholics toward the mission of the Church.[6]

All of these church groups are in full communion with the Pope and subject to the Code of Canons of the Eastern Churches.

In the Roman Church, universal positive ecclesiastical laws, based upon either immutable divine and natural law, or changeable circumstantial and merely positive law, derive formal authority and promulgation from the office of pope, who as Supreme Pontiff possesses the totality of legislative, executive, and judicial power in his person.[7] The actual subject material of the canons is not just doctrinal or moral in nature, but all-encompassing of the human condition.[8]

History, sources of law, and codifications 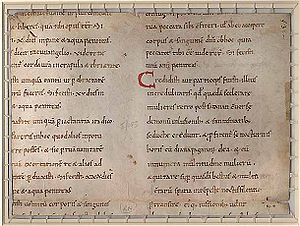 Image of pages from the Decretum of Burchard of Worms, the 11th-century book of canon law.

The Catholic Church has what is claimed to be the oldest continuously functioning internal legal system in Western Europe,[9] much later than Roman law but predating the evolution of modern European civil law traditions. What began with rules ("canons") adopted by the Apostles at the Council of Jerusalem in the first century has developed into a highly complex legal system encapsulating not just norms of the New Testament, but some elements of the Hebrew (Old Testament), Roman, Visigothic, Saxon, and Celtic legal traditions.

The canon law of the Eastern Catholic Churches, which had developed some different disciplines and practices, underwent its own process of codification, resulting in the Code of Canons of the Eastern Churches promulgated in 1990 by Pope John Paul II.[11]

It is a fully developed legal system, with all the necessary elements: courts, lawyers, judges, a fully articulated legal code[12] principles of legal interpretation, and coercive penalties, though it lacks civilly-binding force in most secular jurisdictions. The academic degrees in canon law are the J.C.B. (Juris Canonici Baccalaureatus, Bachelor of Canon Law, normally taken as a graduate degree), J.C.L. (Juris Canonici Licentiatus, Licentiate of Canon Law) and the J.C.D. (Juris Canonici Doctor, Doctor of Canon Law). Because of its specialized nature, advanced degrees in civil law or theology are normal prerequisites for the study of canon law.

Much of the legislative style was adapted from the Roman Law Code of Justinian. As a result, Roman ecclesiastical courts tend to follow the Roman Law style of continental Europe with some variation, featuring collegiate panels of judges and an investigative form of proceeding, called "inquisitorial", from the Latin "inquirere", to enquire. This is in contrast to the adversarial form of proceeding found in the common law system of English and U.S. law, which features such things as juries and single judges.

The institutions and practices of canon law paralleled the legal development of much of Europe, and consequently both modern civil law and common law (legal system) bear the influences of canon law. Edson Luiz Sampel, a Brazilian expert in canon law, says that canon law is contained in the genesis of various institutes of civil law, such as the law in continental Europe and Latin American countries. Sampel explains that canon law has significant influence in contemporary society.[13]

Canonical jurisprudential theory generally follows the principles of Aristotelian-Thomistic legal philosophy.[9] While the term "law" is never explicitly defined in the Code,[14] the Catechism of the Catholic Church cites Aquinas in defining law as "...an ordinance of reason for the common good, promulgated by the one who is in charge of the community"[15] and reformulates it as "...a rule of conduct enacted by competent authority for the sake of the common good."[16]

The Code for the Eastern Churches

The first Code of Canon Law, 1917, was mostly for the Roman Rite, with limited application to the Eastern Churches. After the Second Vatican Council, (1962 - 1965), another edition was published specifically for the Roman Rite in 1983. Most recently, 1990, the Vatican produced the Code of Canons of the Eastern Churches which became the 1st code of Eastern Catholic Canon Law.[18]

The Greek-speaking Orthodox have collected canons and commentaries upon them in a work known as the Pēdálion (Greek: Πηδάλιον, "Rudder"), so named because it is meant to "steer" the Church. The Orthodox Christian tradition in general treats its canons more as guidelines than as laws, the bishops adjusting them to cultural and other local circumstances. Some Orthodox canon scholars point out that, had the Ecumenical Councils (which deliberated in Greek) meant for the canons to be used as laws, they would have called them nómoi/νόμοι (laws) rather than kanónes/κανόνες (rules), but almost all Orthodox conform to them. The dogmatic decisions of the Councils, though, are to be obeyed rather than to be treated as guidelines, since they are essential for the Church's unity.[19]

In the Church of England, the ecclesiastical courts that formerly decided many matters such as disputes relating to marriage, divorce, wills, and defamation, still have jurisdiction of certain church-related matters (e.g. discipline of clergy, alteration of church property, and issues related to churchyards). Their separate status dates back to the 12th century when the Normans split them off from the mixed secular/religious county and local courts used by the Saxons. In contrast to the other courts of England the law used in ecclesiastical matters is at least partially a civil law system, not common law, although heavily governed by parliamentary statutes. Since the Reformation, ecclesiastical courts in England have been royal courts. The teaching of canon law at the Universities of Oxford and Cambridge was abrogated by Henry VIII; thereafter practitioners in the ecclesiastical courts were trained in civil law, receiving a Doctor of Civil Law (D.C.L.) degree from Oxford, or a Doctor of Laws (LL.D.) degree from Cambridge. Such lawyers (called "doctors" and "civilians") were centered at "Doctors Commons", a few streets south of St Paul's Cathedral in London, where they monopolized probate, matrimonial, and admiralty cases until their jurisdiction was removed to the common law courts in the mid-19th century.

Other churches in the Anglican Communion around the world (e.g., the Episcopal Church in the United States, and the Anglican Church of Canada) still function under their own private systems of canon law.

In Presbyterian and Reformed churches, canon law is known as "practice and procedure" or "church order", and includes the church's laws respecting its government, discipline, legal practice and worship.

Roman canon law had been criticized by the Presbyterians as early as 1572 in the Admonition to Parliament. The protest centered on the standard defense that canon law could be retained so long as it did not contradict the civil law. According to Polly Ha, the Reformed Church Government refuted this claiming that the bishops had been enforcing canon law for 1500 years.[21]

The Book of Concord is the historic doctrinal statement of the Lutheran Church, consisting of ten credal documents recognized as authoritative in Lutheranism since the 16th century.[22] However, the Book of Concord is a confessional document (stating orthodox belief) rather than a book of ecclesiastical rules or discipline, like canon law. Each Lutheran national church establishes its own system of church order and discipline, though these are referred to as "canons."

The Book of Discipline contains the laws, rules, policies and guidelines for The United Methodist Church. Its last edition was published in 2012.