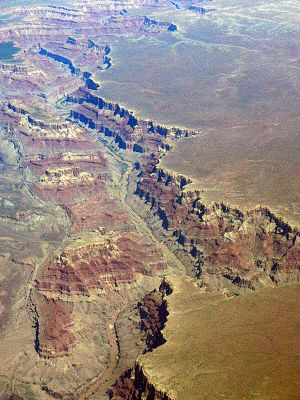 The Grand Canyon, Arizona, at the confluence of the Colorado and Little Colorado rivers 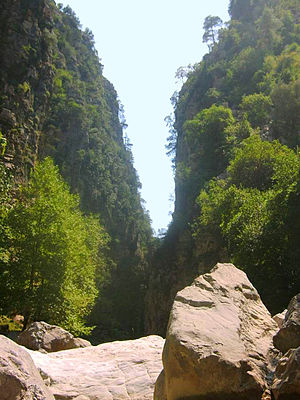 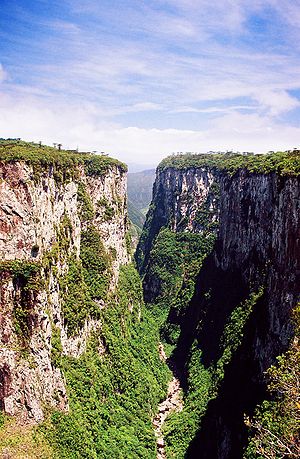 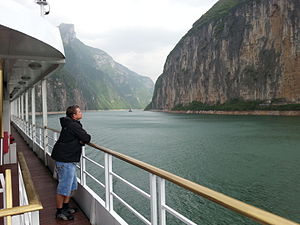 One of three gorges on Yangtze river, China 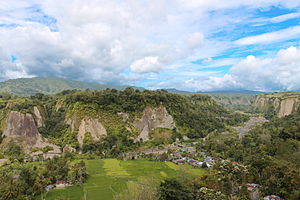 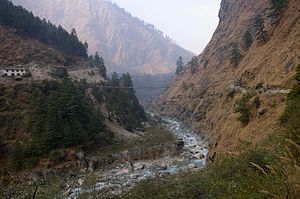 A gorge or canyon (cañon, old spelling occasionally still used) is a deep ravine between pairs of escarpments or cliffs and is the most often carved landscape by the erosive activity of a river over geologic timescales. Rivers have a natural tendency to cut through underlying surfaces so will eventually wear away rock layers to lessen their own pitch slowing their waters; given enough time, their bottoms will gradually reach a baseline elevation—which is the same elevation as the body of water it will eventually drain into. This action, when the river source and mouth are at much different base elevations will form a canyon,[1] particularly through regions where softer rock layers are intermingled with harder layers more resistant to weathering.

A canyon may also refer to a rift between two mountain peaks, such as those in ranges including the Rocky Mountains, the Alps, the Himalayas or the Andes. Usually a river or stream and erosion carve out such splits between mountains. Examples of mountain-type canyons are Provo Canyon in Utah or Yosemite National Park in California's Sierra Nevada. Canyons within mountains, or gorges that have an opening on only one side are called box canyons. Slot canyons are very narrow canyons, often with smooth walls.

The word canyon is Spanish in origin (cañón,[2] pronounced: [kaˈɲon], meaning big caña, cane in English). The word canyon is generally used only in North America, while the words gorge and ravine are used in Europe and Oceania, though gorge and ravine are also used in some parts of North America. In the United States, place names generally use "canyon" in the southwest and "gorge" in the northeast, with the rest of the country graduating between these two according to geography. In Canada, "gorges" are usually narrow, and "ravines" more open and often wooded. The military-derived word defile is occasionally used in the United Kingdom.

Most canyons were formed by a process of long-time erosion from a plateau or table-land level. The cliffs form because harder rock strata that are resistant to erosion and weathering remain exposed on the valley walls.

Canyons are much more common in arid than in wet areas because physical weathering has a more localized effect in arid zones. The wind and water from the river combine to erode and cut away less resistant materials such as shales. The freezing and expansion of water also serves to help form canyons. Water seeps into cracks between the rocks and freezes, pushing the rocks apart and eventually causing large chunks to break off the canyon walls, in a process known as frost wedging.[3] Canyon walls are often formed of resistant sandstones or granite. Submarine canyons form underwater, generally at the mouths of rivers.

Sometimes large rivers run through canyons as the result of gradual geological uplift. These are called entrenched rivers, because they are unable to easily alter their course. In the United States, the Colorado River in the Southwest and the Snake River in the Northwest are two examples of tectonic uplift.

Canyons often form in areas of limestone rock. As limestone is soluble to a certain extent, cave systems form in the rock. When these collapse, a canyon is left, as in the Mendip Hills in Somerset and Yorkshire Dales in Yorkshire, England.

A box canyon is a small ravine or canyon with steep walls on three sides, allowing access and egress only through the mouth of the canyon. Box canyons were frequently used in the American West as convenient corrals, with their entrances fenced.[4] They were also used as kill sites for wild game, which could be driven into the confined space and killed.[5]

The definition of "largest canyon" is imprecise, because a canyon can be large by its depth, length, or the total area of the canyon system. Also the inaccessibility of the major canyons in the Himalaya contributes to their not being regarded as candidates for the biggest canyon. The definition of "deepest canyon" is similarly imprecise, especially if one includes mountain canyons as well as canyons cut through relatively flat plateaus (which have a somewhat well-defined rim elevation). 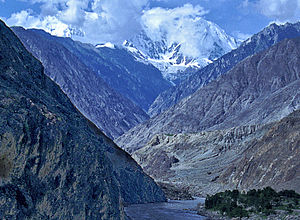 The deepest canyon in the world, the Indus Gorge with Nanga Parbat, the world's 9th highest mountain rising to the south.

The deepest canyon in the world is at the confluence of the Gilgit and Indus rivers, where the Karakoram Highway was constructed, the river flows at an elevation of about 1,000 m (3,300 ft) above sea level. To the South by 15 km, rising in one continuous sweep above the Indus, the largest such rise on the planet, is the summit of the world's 9th-highest mountain, Nanga Parbat, 8,126 m (26,660  ft) high. Rising to the north, also visible from the bridge over the Gilgit, is the westernmost of the great Himalayan peaks, Rakaposhi, 7,788 m (25,550 ft) high. That makes the Indus gorge 7,120 m (23,360 ft) deep from river to peak at that point, more than 600 m (2,000 ft) greater than the depth of the Kali Gandaki Gorge and 1,500 m (5,000 ft) deeper than the Yarlung Tsangpo Gorge. These are the three deepest canyons in the world. Only the largest mountain ranges of Asia have the scale for such canyons to have formed. The Andes of South America are high mountains, but not on the same scale as the Himalaya, Karakoram, and Hindu Kush, which all come together at the confluence of the Gilgit and the Indus in Pakistani Kashmir.

The Yarlung Tsangpo Grand Canyon (or Tsangpo Canyon), along the Yarlung Tsangpo River in Tibet, is regarded by some as the deepest canyon in the world at 5,500 m (18,000 ft). It is slightly longer than the Grand Canyon in the United States.[6] Others consider the Kali Gandaki Gorge in midwest Nepal as the deepest canyon, with a 6400 m (21,000 ft) difference between the level of the river and the peaks surrounding it. 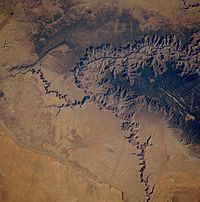 View of the Grand Canyon from the Space Shuttle Challenger

Vying for deepest canyon in the Americas are the Cotahuasi Canyon and Colca Canyon, in southern Peru. Both have been measured at over 3500 m (12,000 ft) deep.

The Grand Canyon of northern Arizona in the United States, with an average depth of 1,600 m (one mile) and a volume of 4.17 trillion cubic metres,[7] is one of the world's largest canyons. It was among the 28 finalists of the New7Wonders of Nature worldwide poll. (Some referred to it as one of the 7 natural wonders of the world.[8]) Copper Canyon in Chihuahua, Mexico is deeper and longer than the Grand Canyon.

The largest canyon in Africa is the Fish River Canyon in Namibia.[9]

In August 2013, the discovery of Greenland's Grand Canyon was reported. Located under an ice sheet, based on the analysis of date from Operation IceBridge, it is believed to be the longest canyon in the world.[10]

Some canyons have notable cultural significance. Evidence of early humanoids has been discovered in Africa's Olduvai Gorge. In the southwestern United States, canyons are important archeologically because of the many cliff-dwellings built in such areas, largely by the ancient Pueblo people who were their first inhabitants. 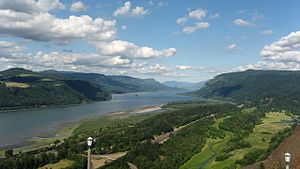 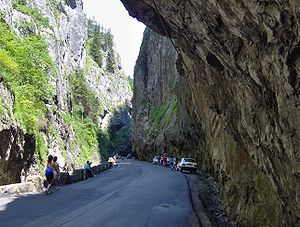 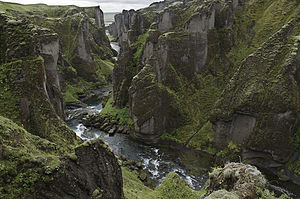 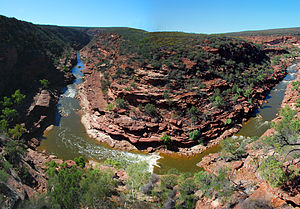 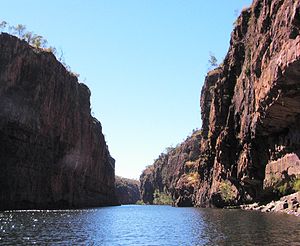 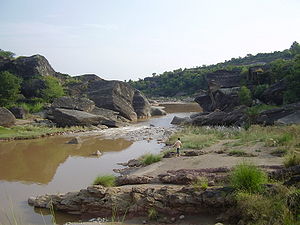 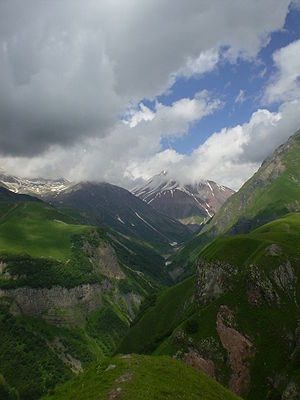 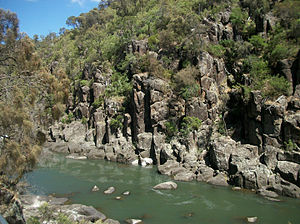 Canyons on other planetary bodies

Venus has many craters and canyons on its surface. The troughs on the planet are part of a system of canyons that is more than 6 400 km long.