Cape Coral was founded in 1957. Real estate developers Leonard and Jack Rosen purchased a 103-square-mile (270 km2) tract known as Redfish Point for $678,000 in that year and, in 1958, began development of the city as a master-planned, pre-planned community.

The Gulf American Corporation (GAC) was formed to develop the area. Canals were dug, streets paved, houses and businesses built.[citation needed] Cape Coral was promoted like no other Florida development. Celebrities were brought in to tout the benefits of "the Cape", as it is known locally. The first building was the Rosens' company headquarters, at the corner of Coronado and Cape Coral Parkway. Cape Coral's first permanent resident was Kenny Schwartz, the Rosens' general manager.[6] Cape Coral's first four homes were completed in May 1958, on Riverside and Flamingo Drives.[7]

Development continued through the early 1960s, mostly on Redfish Point, south of Cape Coral Parkway. By 1963, the population was 2,850; 1,300 buildings had been finished or were under construction; 80 mi (130 km) of road had been built, and 160 mi (260 km) of canals had been dug.[citation needed] The public yacht club, a golf course, medical clinic and shopping center were up and running. A major addition for Cape Coral was the construction of the 3,400 feet (1,000 m) long Cape Coral Bridge across the Caloosahatchee River, which opened in early 1964. Before the bridge, a trip to Fort Myers was more than 20 mi (32 km) via Del Prado Boulevard and over the Edison Bridge to cross the river.

There was a lot of hype, promotion and advertising. Celebrities like Bob Hope, Anita Bryant, and Hugh Downs were brought in. A movie with Phyllis Diller, The Fat Spy (1966), was filmed in Cape Coral and so were episodes of the TV show Route 66.

The city incorporated in August 1970, and its population continued to grow rapidly until the real estate slowdown that gripped the region beginning in 2008.[8]

In its early years, Cape Coral was known as a community with many retired residents.[citation needed] This changed with a population and construction boom in the 1990s, which brought in younger families and professionals. Twenty percent of the population is seasonal residents. Nowadays, the city has a wide variety of businesses, retail shops and restaurants on its major arteries: Cape Coral Parkway, Del Prado Boulevard, Santa Barbara Boulevard and Pine Island Road.

Cape Coral is located at Lua error in Module:Coordinates at line 668: callParserFunction: function "#coordinates" was not found..[9]

Cape Coral Florida has over 400 miles (640 km) of canals, more than any other city in the world.[11] Most of the canals are navigable and some have access to the Gulf of Mexico. Cape Coral's canal system is so extensive that local ecology and tides have been affected.[12]

Cape Coral features a tropical savanna climate or tropical wet and dry climate under the Köppen climate classification system. The area averages 355 days of sunshine each year, but experiences precipitation on 145 days per year. While the summers are very warm, humid and rainy, the winters in Cape Coral are dry with moderate temperatures. Cape Coral receives about 54 inches of rain each year, the majority of which falls from May to September. During the summer months, afternoon rains are heavy yet brief. The city is affected by the annual hurricane season, which begins officially on June 1 and continues through November.

As of 2010, Cape Coral was the eleventh largest city in Florida by population. More than 60 percent of the population is between the ages of 15–64 and residents under 25 outnumber residents over 65. Southwest Florida's 18–24 age group is growing at a faster rate than the state of Florida and the United States.[17] 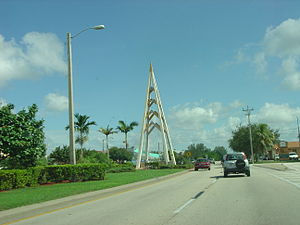 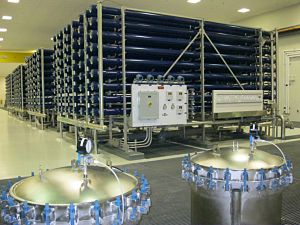 In 1977 Cape Coral, Florida became the first municipality in the United States to use the RO process on a large scale with an initial operating capacity of 3,000,000 US gallons (11,000 m3) per day. By 1985, due to the rapid growth in population of Cape Coral, the city had the largest low pressure reverse osmosis plant in the world, capable of producing 15 MGD (56780 m³/day).[19]

Interstate 75 passes within 10 miles (16 km) of Cape Coral and connects northward to Tampa and on to the Midwestern states; and southeastward to Miami/Fort Lauderdale. Cape Coral borders on U.S. Highway 41. U.S. 41 and I-75 can be accessed from State Route 78 (Pine Island Road). Within the city a network of arterial roadways are established. Cape Coral has approximately 1,100 miles (1,800 km) of roadways. In general, the north/south routes are evenly spaced apart every one or two miles (3 km) and most of them have at least four lanes.

Public transit services in Cape Coral are provided by LeeTran. LeeTran operates 18 fixed-route bus services, including 6 within Cape Coral.[20] Buses operate Monday through Saturday between 5:00 am and 9:45 pm, depending on the route.

The City of Cape Coral operates water and sewer systems for the city. Sewage is collected and highly treated to produce reclaimed water, locally known as "rescued water". Reclaimed water is distributed throughout the City through a dual water pipe system, and used for irrigation. Alternatively, reclaimed water can be discharged into the Caloosahatchee River.

The Cape was among the first in Florida to deploy the new 4.9 GHz pre-WiMax wireless channel authorized by the FCC in 2003 for exclusive Public Safety use.[23]

One of Florida’s youngest state universities, Florida Gulf Coast University (FGCU), opened in 1997 in nearby Fort Myers and now serves more than 12,000 students. FGCU has established a Cape Coral satellite facility, which provides Cape students with a growing offering of core courses. The university offers undergraduate, graduate, and doctoral degrees, including an executive master’s program, a college of business and engineering and biotechnology programs.

Other colleges and universities serving the area are Hodges University, Southwest Florida College and Rasmussen College.

Cape Coral is also home to the Cape Coral Technical College,[27] a postsecondary educational institution operated by the Lee County public school system. It provides training in medical, computer and food-science fields. Employer-specific training, both on and off-site, is available through Business and Industry Services of Lee County which maintains an office in Cape Coral.[28]

The city features a sandy beach and fishing pier on the Caloosahatchee River at the public Yacht Basin & Club. Cape Coral is home to the expansive SunSplash Water Park (Virtual Tour of the Waterpark), more than 30 recreational parks, and seven golf courses. Cape Coral offers a variety of Gulf beaches in its immediate neighborhood, such as Sanibel Island and Fort Myers Beach. The area is known by birding enthusiasts for a wide variety of wildlife and the largest population of burrowing owls in the state of Florida.[29]

Cape Coral’s cultural assets include the Historical Museum, the Art Studio, the Cape Coral Art League, and the Cultural Park Theater, a 187-seat performing arts facility that serves as home to community actors. In addition, there are several regional arts and performance venues in the immediate area, including the Barbara B. Mann Performing Arts Hall.

Cape Coral is home to three invasive species. The green iguana and the spiny-tailed iguana and in 2009, the Nile monitor was discovered. The iguanas are found throughout southern Florida and generally do not pose a threat. The Nile monitor is however a large (7–9 feet), fast traveling, fast swimming, carnivore with a wide diet, which can include fish, fowl, and small mammals. The city's many waterways work against its capture and provide an easy transportation route around the city.[31]