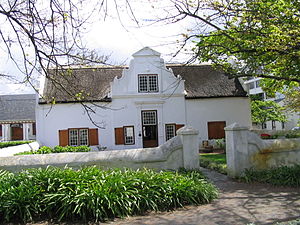 Cape Dutch architecture is a traditional Afrikaner architectural style found mostly in the Western Cape of South Africa. The style was prominent in the early days (17th century) of the Cape Colony, and the name derives from the fact that the initial settlers of the Cape were primarily Dutch. The style has roots in mediaeval Netherlands, Germany, France and Indonesia.

Houses in this style have a distinctive and recognisable design, with a prominent feature being the grand, ornately rounded gables, reminiscent of features in townhouses of Amsterdam built in the Dutch style. The houses are also usually H-shaped, with the front section of the house usually being flanked by two wings running perpendicular to it. Furthermore, walls are whitewashed, and the roofs are thatched.

Most Cape Dutch buildings in Cape Town have been lost to new developments – particularly to high-rises in the City Bowl during the 1960s. However, the Cape Dutch tradition can still be seen in many of the farmhouses of the Wine Route, and historical towns such as Stellenbosch, Paarl, Swellendam, Tulbagh and Graaff-Reinet.

One characteristic feature of South African colonial architecture which has attracted the attention of many observers is the extensive use of gables. Earlier research has repeatedly sought to justify the term `Cape-Dutch' solely by comparing the decorative form of these gables to those of Amsterdam. However, in the second half of the 18th century, the period in which, the entire development of the South African gable tradition occurs, gable architecture had gradually ceased to be built in Amsterdam. North of Amsterdam, along the river Zaan, however, gable design remained vigorous until the capture of the Cape. South African gables have many features in common with gables along the river Zaan, in spite of the different materials used.[1]

The house Cape is home to one of the most distinctive styles of 'settler' architecture in the world. It is known as the 'Cape Dutch' style, because it developed during the century and a half that the Cape was a Dutch colony. Even at the end of that period, at the beginning of the 19th century, the colony was inhabited by fewer than fifty thousand people, mostly of white and brown complexion. This number was spread over an area roughly the size of the United Kingdom. Yet despite their small number, over such a vast area, the Cape Dutch style was of an amazing consistency, clearly related to rural architecture in northwestern Europe, but equally clearly with its own unmistakable character and features.

The old farm complex of Spier shows all of these features to perfection. It consists of a main homestead with, surrounding a forecourt in front of it, its auxiliary buildings: a jonkershuis (a second dwelling, intended for the farmer's eldest son), stables, wine 'cellars', workers' quarters. What strikes one first of all is the overall uniformity of all these buildings: the relationship between wall and roof, the materials of which they are built: plastered and limewashed soft brick, and their dimensions: all of them almost exactly six metres in roof span.

It is this last feature: the high degree of standardisation, that is the main characteristic of 'Cape Dutch' architecture, and the one that sets it apart from similar types of architecture elsewhere. The strict uniformity of roof span also dictated the ground plan of what was usually the most commodious of all the buildings on a farmyard: its homestead. To accommodate an adequate number of rooms, the building had to develop wings to the back – all with the same roof height and the same six-metres roof span. This produced what has come to be known as the 'letter-of-the-alphabet' plan. A 'T' shape was the simplest: a wing springing from the centre and containing a large central room and a kitchen behind. But when this did not yet provide enough space, the 'H'-shape was developed, with an entire section at the back parallel to the front section. This shape is not found anywhere else on earth. The homestead of Spier is an interesting case of an incomplete H: one in which the T has not quite grown into an H – a 'small letter h' in fact.

If the 'letter-of'the-alphabet' plan is the feature that gives local colonial architecture is uniqueness, to the casual observer it is something else that grabs the attention: the Cape Dutch gable. But gables are far from unique at the Cape. They are found all over Europe, especially in the cities of the Low Countries. A gable is basically a piece of wall that rises above the end of a pitched roof. (The word derives from the old Dutch word 'gaffel', a forked pole that served to hold up a roof-ridge beam in primitive architecture.) In the Netherlands and elsewhere in Europe nearly all gables are therefore placed at the end of a house, often in rows where the houses stand end-on to the street as in a city like Amsterdam. At the Cape, we see gables used in a different way. That is because in our wide-open country, also in the towns, the houses invariably stand sideways, with open arms, as it were, welcoming visitors. So if a gable was needed to give the house a 'face', it had to go in the middle of the facade, over the front door. So at the Cape the finest gables are 'centre gables'. Technically they are not gables at all, because they do not terminate a roof but only a built-out section of it – full-height flush dormer windows they could be called. With their sloping parapets gables lend themselves excellently to receive decorative outlines and enrichments. Among the local plasterers abundant talent was found to turn some of these into true masterpieces. Many of them must have been people of colour, some of them slaves. But in their shapes and motifs they faithfully followed the European style periods: 'baroque' with its increasingly ornate curves up to about 1790, then 'neo-classical' shapes with more straight lines, pilasters and pediments.

But the centre gables are not the only gables on Cape Dutch farmyards. Thatch roofs also need proper roof-end gables, to prevent the strong prevailing winds from ripping up the thatch at the ends. These were often simplified versions of the centre gables. With their neat white bits of sloping walling they provide a pleasing containment to all Cape Dutch structures.

Of all the three hundred or so Cape Dutch farm complexes in the Cape, all with their own centre and end gables, it is Spier that boasts the greatest number of these: twenty-one in all, all beautifully preserved. As is happens, these twenty-one gables represent half a century in time and virtually the entire range of styles of that period. A leisurely walk around the farmyard will therefore amount to a lesson in art history!

The Cape gables are not the only features by which to date the farm buildings. Doors and windows also changed over time. Earlier, 'Dutch' windows have sturdy frames set almost flush with the outside of the walls, with small, standard-size glass panes. During the 'English' period, from the early 19th century onward, larger window panes became available, frames were more slender and were set back in the wall, while in sash window the upper halves were made to slide down while in the Dutch sashes they were made a rest on a fixed 'transom'. Instead of square upper lights over doors, 'fan'lights, semicircular with radiating glazing bars, came into use, while the doors themselves changed from horizontally divided ('stable-type') to vertically divided and panelled. This latter type of joinery is well represented in the facade of the main homestead, of which the date on the front gable, 1822, indeed firmly belong to the English period. But at the back, the earlier type is still in evidence, also showing that the house is much older than 1822, probably by as much as half a century.

The farm of Spier was 'granted" by the Dutch East India Company ('VOC') in 1692 to 'drummer' Arnoud Jansz or Janssen), but he had been living there since 1683. This was the time that the little refreshment post at the Cape of Good Hope, founded in 1652, was starting to spread inland and become a proper colony. A whole string of farms were developed along the Eerste Rivier – the 'first river' to be encountered by inland-moving settlers. The river is still to be found just behind the bell-tower. To service these farmers living in the 'remote inland regions', the town of Stellenbosch was established in 1685.

The name Spier is derived from the city of Speyer (Spiers in Dutch) in Germany, the birthplace of a later owner, from 1712, Hans Hendrick Hattingh. Many of the buildings now standing, and the earlier gables, were erected during the ownership of Albertus Johannes Mijburgh in the 1770s, and the later, post-1800 gables during that of Andries Christoffel van der Bijl. Both of these are still prominent Afrikaans family names.

The Manor House's centre gable is dated 1822. Its design is a simple neo-classical model with pilasters and a slightly rounded pediment or cap. The two end-gables are late-straight design with caps, dated 1822. The additional end-gable is late-holbol in style with simple strap-moulds, also dated 1822.

The Wine Cellar's centre gable, dated 1767, is believed to be one of the oldest gables in Stellenbosch. The style is early holbol (concave-convex, richly profiled mouldings clinging to the gable outline). The end gables are also holbol with simple strap-mouldings.

The Jonkershuis centre gable is late holbol style with a triangular pediment. It has simple strap-mouldings and is dated 1817. The pediment is typical of this time. Its end-gables are early-straight with short mouldings at the feet and steeply pitched 'chimney tops', believed to be built in the 1770s.

In line with the Jonkershuis and Homestead is the Workshop. This line-up of three intact old buildings makes for one of the most impressive complexes in all of the Cape Dutch architecture. The two adjoining and matching end-gables form a fascinating composition. The centre gable is later holbol in style and dated 1778. Compared to the Wine Cellar gable it has slightly more elongated proportions with curvings in the bottom convex mouldings continuing onto the gable face, winding themselves into knots.

Various details on this building indicate that it is much older than the gable date of 1812. The centre gable is a particularly fine example of a neo-classical gable; dated 1812. It has a small pediment at the top and 'winged scrolls' at the bottom. The end-gables have holbol outlines all with simple strap moulds.

Also known as the Cow-House, this building has a centre gable which is an example of the second holbol style where the lower curves are made to continue onto the gable face. It is undated, but is almost identical to that of nearby wine-farm Vergenoegd, which is dated 1773. The end-gables are simple but richly profiled holbol gables of the same date.