Cape Hatteras /ˈhæt.ʌ.rʌs/ is a cape on the coast of North Carolina, and is protected as the namesake feature of the Cape Hatteras National Seashore. [1] It is the point that protrudes the farthest to the southeast along the northeast-to-southwest line[clarification needed] of the Atlantic coast of North America.

Cape Hatteras is a bend in Hatteras Island, one of the long thin barrier islands that make up the Outer Banks. It is the site where the two great basins of the East Coast meet.[2] The cape's shoals are known as Diamond Shoals. Somewhat analogous to Point Conception in Southern California,[citation needed] this on-the-edge placement at the confluence of the Labrador and Florida currents leads to unusually diverse biological assemblages. Many species' ranges have either a southern or northern terminus at the cape.

Cape Hatteras has a humid subtropical climate (Köppen Cfa), with mild winters, and warm to hot, humid summers, and is part of USDA Plant Hardiness Zone 9.[3] It is surrounded by large bodies of water, with Pamlico Sound to the west and northwest, and the Atlantic Ocean to all directions from northeast through southwest. The proximity to water moderates conditions throughout the year, producing cooler summers and warmer winters than inland areas of North Carolina.[4] The warmest days in July and early August have an average high temperature of less than 85 °F (29 °C). As a result of its proximity to water, temperatures above 90 °F (32 °C) are rare, with an average of only 2.3 days per summer above 90 °F (32 °C);[5] one to three years out of each decade will not see any 90 °F readings. The coolest month, January, has a daily mean of 45.5 °F (7.5 °C), with lows normally well above freezing (32 F). The average window for freezing temperatures is from December 12 to March 11 (allowing a growing season of 275 days), between which there is an average of 21 nights with lows at or below the freezing mark,[5] though only once every several years does the thermometer stay at or below the freezing mark all day. Extremes in temperature range from 6 °F (−14 °C) on January 21, 1985 up to 97 °F (36 °C) on June 27, 1952.[citation needed]

Snowfall is observed occasionally, and usually light.[4] Precipitation, mostly in the form of rain, is over 58 inches (1,500 mm) per year, making it the wettest coastal location in North Carolina.[4] Precipitation is evenly distributed throughout the year in which July to September are the wettest months.[4] On average, August is the wettest month, owing to high frequencies of both summer thunderstorms and tropical systems (hurricanes, tropical storms and tropical depressions) that affect the area, mostly from August to early October.[citation needed]

Cape Hatteras is virtually the highest-risk area for hurricanes and tropical storms along the entire U.S. Eastern seaboard. Cape Hatteras can experience significant wind and/or water damage from tropical systems moving (usually northward or northeastward) near or over North Carolina's Outer Banks, while other areas (i.e. Wilmington, NC or Myrtle Beach and Charleston, SC to the south and Norfolk, VA and Maryland's Eastern Shore to the north) experience much less, minimal or no damage. The Cape Hatteras area is infamous for being frequently struck by hurricanes that move up the East Coast of the United States. The strike of Hurricane Isabel in 2003 was particularly devastating for the area. Isabel devastated the entire Outer Banks and also split Hatteras Island between the two small towns of Frisco and Hatteras. NC 12, which provides a direct route from Nags Head to Hatteras Island, was washed out when the hurricane created a new inlet. Students had to use a ferry to get to school. The inlet was filled in with sand by the Army Corps of Engineers which took nearly two months to complete. The road, electrical and water lines were quickly rebuilt when the inlet was filled.[citation needed] 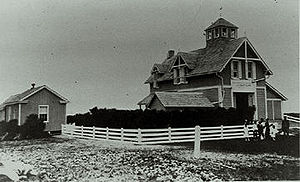 The Cape Hatteras Life Guard Station, which later became part of the Durant Motel, and was upended by Hurricane Isabel in 2003

The name Hatteras is the sixth oldest surviving English place-name in the U.S. An inlet north of the cape was named "Hatrask" in 1585 by Sir Richard Grenville, the admiral leading the Roanoke Colony expedition sent by Sir Walter Raleigh. It was later applied to the island and cape as well, and modified to "Hatteras."[8] Hatteras is the name of the Hatteras Indians.[9]

Because mariners utilize ocean currents to speed their journey, many ships venture close to Cape Hatteras when traveling along the eastern seaboard, risking the perils of sailing close to the shoals amid turbulent water and the frequent storms occurring in the area. So many ships have been lost off Cape Hatteras that the area is known as the "Graveyard of the Atlantic." Cape Hatteras is also well known for surfing.[10][11]

The first lighthouse at the cape was built in 1803; it was replaced by the current Cape Hatteras Lighthouse in 1870, which at 198.48 feet (60.50 m) from the ground to the tip of its lightning rod is the tallest lighthouse in the United States and one of the tallest brick lighthouses in the world. In 1999, as the receding shoreline had come dangerously close to Cape Hatteras Lighthouse, the 4830-ton lighthouse was lifted and moved inland a distance of 2,900 feet (880 m). Its distance from the seashore is now 1,500 feet (460 m), about the same as when it was originally built.