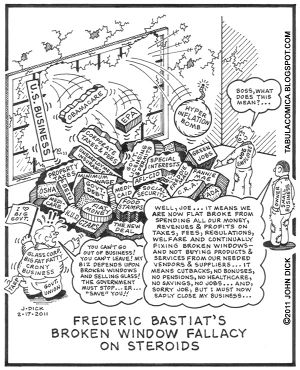 "I'm sorry, Joe, but I just can't take it anymore; I'm closing our shop down for good. With any luck, you'll be able to sell Kim rompers over the internet before the commissars find a way to strangle it, too. But hey, it's all capitalism's fault, they'll lie; if only they had more control, none of it would have happened."

In short, capitalism is the economic manifestation of liberty. To the extent that force is initiated in a social system, that system is then not capitalist to that extent, by definition. Such a black and white dichotomy is of no use to societal parasites, who busy themselves redefining capitalism into a slur descriptive of any nominally organized scheme of thievery they do not control. Anti-concepts such as "predatory capitalism", "state capitalism" (in which the "state" being so described obviously initiates force), "crony capitalism", etc., proliferate in their oxymoronic newspeak. For example, corporate recipients of government funding will be excoriated as "capitalist" by communist academics in government-funded educational institutions.

Capitalism is synonymous with the French term laissez faire, which purportedly originated in a meeting that took place around 1681 between powerful French Comptroller-General of Finances Jean-Baptiste Colbert and a group of French businessmen headed by M. Le Gendre. When the eager mercantilist minister asked how the French state could be of service to the merchants and help promote their commerce, Le Gendre replied simply "laissez-nous faire" ("leave it to us" or "let us do [it]" (i.e., without government force).[1]

The French economist Frédéric Bastiat developed the concept of opportunity cost and introduced the Parable of the Broken Window (also known as "The Broken Window Fallacy") in the early 17th century.

In his book The Road to Serfdom, Friedrich Hayek asserts that the economic freedom of capitalism is a requisite of political freedom, observing that the market mechanism is the only way of deciding what to produce and how to distribute the items without using coercion. Milton Friedman also promoted this view, claiming that centralized economic operations were always accompanied by political repression. In his view, transactions in a market economy are voluntary, and that the wide diversity that voluntary activity permits is a fundamental threat to repressive political leaders and greatly diminishes their power to coerce.[2]

The novelist and philosopher Ayn Rand made positive moral defenses of laissez-faire, most notably in her 1957 novel Atlas Shrugged, and in her 1966 collection of essays Capitalism: The Unknown Ideal. She argued that capitalism should be supported on moral grounds, not just on the basis of practical benefits.

Essentially, any adherent of any flavor of socialism disparaging property rights.