From Infogalactic: the planetary knowledge core
Jump to: navigation, search
Not to be confused with Sea captain. 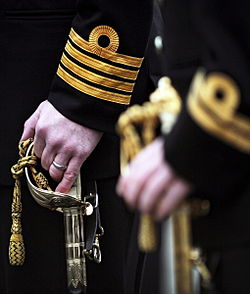 Captain is the name most often given in English-speaking navies to the rank corresponding to command of the largest ships. The rank is equal to the army rank of colonel.

The NATO rank code is OF-5.

Any naval officer who commands a ship (titled commanding officer, or C.O.) is addressed by naval custom as "captain" while aboard in command, regardless of his actual rank. Officers with the rank of captain travelling aboard a vessel they do not command should be addressed by their rank and name (e.g., "Captain Smith"), but they should not be referred to as "the captain" to avoid confusion with the vessel's captain.[1] According to U.S. Navy wardroom etiquette[citation needed], an embarked naval captain is normally addressed in that setting as "commodore," since, if a line officer, he will or she will typically be the next senior officer in the chain of command[citation needed], such as the commodore of a destroyer squadron, amphibious squadron or submarine squadron. On a U.S. Navy ship a marine or army captain, which is a substantially lower rank than a naval captain, may be socially addressed with the courtesy title of "major" to differentiate him or her from the ship's commander.[citation needed]

On large ships (e.g., aircraft carriers), the executive officer (XO) may be a captain in rank, in which case it would be proper to address him by rank. Often the XO prefers to be called "XO" to avoid confusion with the CO, who is also a captain in rank and the captain of the ship.[2] The same applies to aircraft carriers in the U.S. Navy, where the commander and deputy commander of the embarked carrier air wing are both captains in rank, but are addressed by the titles of "CAG" and DCAG," respectively.

The command of a ship is often given to the naval rank equivalent to a commissioned officer between commander (OF-4) and commodore or rear admiral (OF-6).[Note 1] The naval rank should not be confused with the army, air force, or marine ranks of captain, which all have the NATO code of OF-2.

Captains with sea commands generally command ships of cruiser size or larger, the more senior the officer, the larger the ship, but ship commanders do not normally hold a higher rank than captain. In the Royal Navy, a captain might command a destroyer flotilla with the appointment (not rank) of captain (D), while naval aviator and naval flight officer captains in the U.S. Navy command aircraft carriers, large-deck amphibious assault ships, carrier air wings, maritime patrol air wings, and functional and specialized air wings and air groups.

Rear admirals will normally embark on large capital ships such as aircraft carriers, which will function as the flagship for their strike group or battle group, but a captain will retain command of the actual ship. Even when a senior officer who is in the ship's captain's chain of command is present, all orders are given through the captain. Many captains hold shore commands and staff positions afloat and ashore.

The following articles deal with the rank of captain as it is used in various navies.