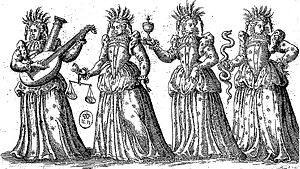 The Cardinal virtues are a quartette set of virtues recognized in the writings of Classical Antiquity and, along with the theological virtues, also in Christian tradition. They consist of the following qualities:

These were derived initially from Plato's scheme, discussed in Republic Book IV, 426-435 (and see Protagoras 330b, which also includes piety (hosiotes)); expanded on by Cicero, and adapted by Saint Ambrose, Augustine of Hippo, and Thomas Aquinas (see Summa Theologica II(I).61). The term "cardinal" comes from the Latin cardo or hinge; the cardinal virtues are so called because they are the basic virtues required for a virtuous life. They are also related to the Quadrivium.

The four cardinal virtues appear as a group (sometimes included in larger lists) long before they are later given this title.

Plato identified the four cardinal virtues with the classes of the city described in The Republic, and with the faculties of man. Plato narrates a discussion of the character of a good city where the following is agreed upon. “Clearly, then, it will be wise, brave, temperate [literally: healthy-minded], and just.” (427e; see also 435b) Temperance was common to all classes, but primarily associated with the producing classes, the farmers and craftsmen, and with the animal appetites, to whom no special virtue was assigned; fortitude was assigned to the warrior class and to the spirited element in man; prudence to the rulers and to reason. Justice stands outside the class system and divisions of man, and rules the proper relationship among the three of them.

“Virtue may be defined as a habit of mind (animi) in harmony with reason and the order of nature. It has four parts: wisdom (prudentiam), justice, courage, temperance.” (De Inventione, II, LIII [2])

Cicero discusses these further in De Officiis (I, V and following).

The cardinal virtues are listed in the Bible. The deuterocanonical book Wisdom of Solomon 8:7 reads, "She [Wisdom] teaches temperance, and prudence, and justice, and fortitude, which are such things as men can have nothing more profitable in life."

They are also found in the Biblical apocrypha. 4 Maccabees 1:18-19 relates: “Now the kinds of wisdom are right judgment, justice, courage, and self-control. Right judgment is supreme over all of these since by means of it reason rules over the emotions.”

Catholic moral philosophy drew from all of these sources when developing its reflections on the virtues.

St. Ambrose (330s-397 AD) was the first to use the expression “cardinal virtues.” “And we know that there are four cardinal virtues temperance, justice, prudence, fortitude.” (Commentary on Luke, V, 62)

St. Augustine, discussing the morals of the church, described them:

"For these four virtues (would that all felt their influence in their minds as they have their names in their mouths!), I should have no hesitation in defining them: that temperance is love giving itself entirely to that which is loved; fortitude is love readily bearing all things for the sake of the loved object; justice is love serving only the loved object, and therefore ruling rightly; prudence is love distinguishing with sagacity between what hinders it and what helps it." (De moribus eccl., Chap. xv)

Relationship to the theological virtues

In the Book of Genesis (28:10-22) Jacob describes his vision of a ladder or stairway leading to heaven. In oral tradition, the three principal rungs on the ladder were denominated empathy, Hope and Love. (The King James Version of the Bible uses "charity," but "charity" was derived from caritas, or "love.") These three are mentioned in 1 Corinthians 13: And now these three remain: faith, hope and love. But the greatest of these is love. Because of this reference, the seven attributes are sometimes grouped as four cardinal virtues (prudence, temperance, fortitude, justice) and three heavenly graces (faith, hope, charity).

Efforts to relate the cardinal and theological virtues differ. St. Augustine sees faith as coming under justice. Beginning with a wry comment about the moral mischief of pagan deities, he writes:

"They [the pagans] have made Virtue also a goddess, which, indeed, if it could be a goddess, had been preferable to many. And now, because it is not a goddess, but a gift of God, let it be obtained by prayer from Him, by whom alone it can be given, and the whole crowd of false gods vanishes. For as much as they have thought proper to distribute virtue into four divisions--prudence, justice, fortitude, and temperance--and as each of these divisions has its own virtues, faith is among the parts of justice, and has the chief place with as many of us as know what that saying means, ‘The just shall live by faith.’" (City of God, IV, 20)

Replacement of the virtues

Jesuit scholars, Daniel Harrington and James Keenan, find the four cardinal virtues in need of replacement by new ones for the Church. The reasons they give are:

In replacement, they suggest the three Bible virtues of: Faith, Hope, and Love. Additionally, they add: be humble, be hospitable, be merciful, be faithful, reconcile, be vigilant, and be reliable. This totals to 10 new virtues to replace the four cardinal virtues.[4]

Depictions of the virtues 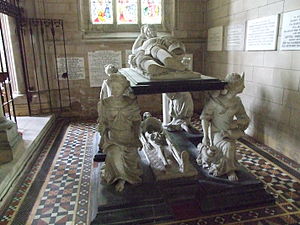 The Tomb of Sir John Hotham, supported by figures of the cardinal virtues. 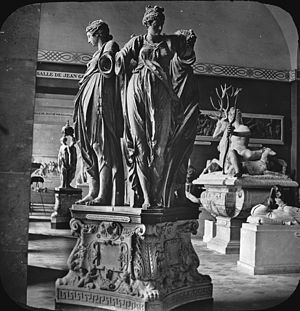 The Cardinal Virtues are often depicted as female allegorical figures and were a popular subject for funerary sculpture. The attributes and names of these figures may vary according to local tradition.

In many churches and artwork the Cardinal Virtues are depicted with symbolic items:

Notable depictions include sculptures on the tomb of Francis II, Duke of Brittany and the tomb of John Hotham. They were also depicted in the garden at Edzell Castle.

A humorous depiction of the four cardinal virtues appears in the children's book "Masterpiece" written by Elise Broach and illustrated by Kelly Murphy.