From Infogalactic: the planetary knowledge core
Jump to: navigation, search
This article is about the Democratic American politician. For the former lead singer of the band Vicious Rumors, see Carl Albert (musician).

Albert represented a southeastern Oklahoma Congressional district as a Democrat for 30 years, starting in 1947. He is best known for his service as Speaker of the United States House of Representatives from 1971 to 1977. At 5 feet 4 inches (1.63 metres) tall, Albert was often affectionately known as the "Little Giant from Little Dixie", and held the highest political office of any Oklahoman in American history.

Albert was born in McAlester, Oklahoma. Shortly after his birth his family moved to a small town just north of McAlester called Bugtussle. He was the son of a coal miner and farmer and grew up in a log cabin on his father's farm. In high school he excelled in debate, was student body president, and won the national high school oratorical contest, earning a trip to Europe. During this time he was an active member of his local Order of DeMolay chapter and is an inductee of the Order of DeMolay Hall of Fame.[1] Albert later petitioned his local Masonic Lodge and became an active Freemason. He entered the University of Oklahoma in 1927. There, he majored in political science and won the National Oratorical Championship in 1928, receiving an all-expense-paid trip to Europe. He earned enough money to fund the rest of his undergraduate education. While at Oklahoma, he was an accomplished amateur wrestler, a member of the Kappa Alpha Order Greek letter fraternity, and a member of the all-male spirit club. He graduated Phi Beta Kappa in 1931, was the top male student, then studied at the University of Oxford on a Rhodes Scholarship. He received a Bachelor of Arts in Law and Bachelor of Civil Laws from St Peter's College before returning to the United States in 1934. He opened a law practice in Oklahoma City in 1935. He worked for a series of oil companies in leasing work, until the start of World War II.

Albert joined the United States Army as a private in 1941. He served with the Third Armored Division briefly, but was soon commissioned a second lieutenant. Most of his service was with the Judge Advocate General Corps. While in the army, Albert married Mary Harmon on August 20, 1942, in Columbia, South Carolina, just before he was sent to the South Pacific.[2] The couple had two children, Mary Frances and David.[3] For his service, Albert earned a Bronze Star, and saw service in the Pacific Theater, where he served in the office of the judge advocate general on the staff of General Douglas MacArthur. He left the Army with the rank of lieutenant colonel in 1946.[4]

Albert was elected to Congress for the first time in 1946. He was a Cold War liberal, and supported President Harry S. Truman's containment of Soviet expansionism and domestic measures like public housing, federal aid to education, and farm price supports. Speaker of the House Sam Rayburn noticed his diligence as a legislator and began inviting him to informal meetings in the speaker's office. Rayburn also advised Albert to seek the chairmanship of the Agriculture Committee in 1949. Albert was appointed House Majority Whip in 1955 and was elected House Majority Leader after Rayburn's death in 1961.[2]

However, Albert seemed to describe himself as a political moderate. He said, he "... very much disliked doctrinaire liberals – they want to own your minds. And I don’t like reactionary conservatives. I like to face issues in terms of conditions and not in terms of someone’s inborn political philosophy.”[5]

Albert was inducted into the Oklahoma Hall of Fame in 1957.[6] 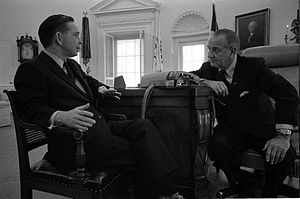 As Majority Leader, Albert was a key figure in advancing the Democratic legislative agenda in the House, particularly with health care legislation. Medicare, the federal program of hospital insurance for persons 65 and older, was initially proposed by the Kennedy Administration as an amendment to the Social Security program. Albert knew the bill had insufficient Congressional support for passage due to the opposition of ten key Republicans and eight key southern Democrats. He advised President Kennedy to seek Senate passage of the measure first. Albert calculated that the Senate should bring it to the House as a conference committee report on their own welfare bill, instead of trying direct introduction into the House.

Although well-planned, Albert's efforts on behalf of the Medicare bill were not successful at that time. After the Kennedy assassination, Albert worked to change House rules so that the majority Democrats would have greater influence on the final decisions of Congress under President Lyndon B. Johnson. The changes included more majority leverage over the House Rules Committee, and stronger majority membership influence in the House Ways and Means Committee. With these changes in place, Albert was able to push through the Medicare bill, known as the Social Security Act of 1965, and he shepherded other pieces of Johnson's Great Society program through Congress.

Albert also chaired the infamous 1968 Democratic National Convention in Chicago. The convention was one of the most chaotic conventions in American history. Riots and protests raged outside the convention venue, and disorder reigned among convention delegates tasked with leading the party after the assassinations of Robert F. Kennedy and Martin Luther King, Jr., the increasing casualties of the Vietnam War, and Johnson's decision to withdraw from the race for his party's presidential nomination after a bruising and humiliating New Hampshire primary.

Speaker of U.S. House of Representatives

When Speaker John W. McCormack retired in January 1971, during the second half of Richard Nixon's first term as president, Albert was elected Speaker of the House of Representatives. Albert's Chief of Staff was Charles Ward, a respected Washington DC leader and former newspaper editor from Oklahoma.

As the Watergate scandal developed in 1973, Albert, as Speaker, referred some two dozen impeachment resolutions to the House Judiciary Committee for debate and study.[7] Also in 1973 Albert appointed Felda Looper as the first female page in the House of Representatives.[8]

In 1973, during Albert's second term as Speaker and Nixon's second term as president, Vice President Spiro Agnew was investigated for tax evasion and money laundering for bribes he took while he was Governor of Maryland. Agnew resigned as Vice President and eventually pleaded nolo contendere to the charges, as part of a package plea agreement. This event put Albert next in line to assume the presidential powers and duties, should that office become vacant.

Under the provisions of the Twenty-fifth Amendment to the United States Constitution, Nixon nominated Republican House Minority Leader Gerald R. Ford to succeed Agnew as Vice President in October 1973. As the Watergate crisis began to unfold, many believed that Nixon would be forced to resign from office, possibly before both Houses of Congress could confirm a Vice President. Had Nixon resigned without a sitting Vice President to succeed him, Albert would have become Acting President under the Presidential Succession Act of 1947, which would have forced Albert to resign from the office of Speaker as well as the House.

Agnew's resignation was the first occasion since the ratification of the Twenty-fifth Amendment in which it was possible for a member of one party to assume the presidency after a member of the opposing party vacated the office. As Speaker of the House, Albert presided over the only body with the authority to impeach Nixon. He also had the authority to prevent any Vice Presidential confirmation vote from taking place in the House, as the Speaker has complete control over what House votes take place. In other words, Albert could have maneuvered to make himself Acting President. However, Albert concluded that, as a Democrat, he had no right to a Presidency that the American people had entrusted by election to a Republican, although the Constitution does not mention political parties. He later stated that if he had become Acting President by succession that it would be in the national interest to resign immediately after the House and Senate had confirmed a Republican Vice President. The Vice Presidency was vacant for about seven weeks; Ford was confirmed and sworn in as Vice President in December 1973.

The country was confronted with the critical issue of presidential succession eight months later. Nixon resigned on August 9, 1974, and the office of Vice President was once more left vacant when Ford was sworn in as President that day. After former New York Governor Nelson Rockefeller was nominated by Ford, then confirmed and sworn into office as Vice President in December, any issue of presidential succession was moot.

A different issue arose during Albert's last term in office when he was confronted with the Tongsun Park scandal. He was accused of accepting gifts and bribes from a lobbyist who was also a member of South Korean intelligence. Albert denied having accepted bribes and admitted to have received only token gifts, which he disclosed. He decided to retire at the end of the 94th Congress in January 1977, and after leaving the House he turned the gifts over to the General Services Administration as required by law. Albert was never charged with a crime.[9][10][11][12] 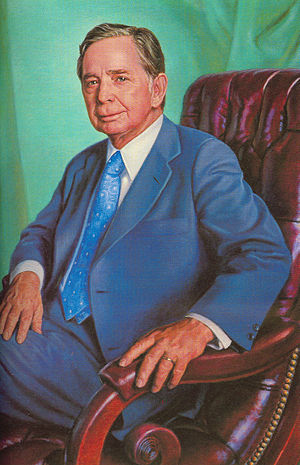 After he left Washington, Albert returned to McAlester, turning down many lucrative financial offers from corporate concerns. He died there on February 4, 2000. Albert published his memoirs, with help from university professor Danney Goble, entitled Little Giant (University of Oklahoma Press, 1990, ISBN 0-8061-2250-1). A post-retirement editorial in the New York Times said he was, "... a conciliator and seeker of consensus, a patient persuader . . . trusted for his fairness and integrity.”[5]

After retiring from Congress, he went home to Bugtussle, although he maintained an office in McAlester. He lectured at the University of Oklahoma and made speeches both in the United States and abroad.[5]

The Carl Albert Center at the University of Oklahoma in Norman was established in 1979 for the general purpose of studying Congress and the particular purpose of researching Albert's life and political career. The Center holds the archive of Albert's Congressional papers along with those of Robert S. Kerr, Helen Gahagan Douglas, Millicent Fenwick, Ernest Istook, Fred R. Harris, Percy Gassaway, and many others. The Congressional Archives hold material from the Civil War era to the present, but the largest portion covers the 1930s to the 1970s. Carl Albert Indian Health Facility in Ada is part of the Public Health Service) and is administered by the Chickasaw Nation of Oklahoma. Durant named its Carl Albert Park for him, and a monument to Albert resides at his birthplace in McAlester. Several institutions and buildings in Oklahoma bear Albert's name. Carl B. Albert Middle School and Carl B. Albert High School in Midwest City and Carl Albert State College in Poteau are named for him.[5]

The University of Oxford established a monument to Albert in the Eunomia Chambers of the St Peter's College Law Library.

Carl Albert married, in 1942, Mary Harmon; they had a son and a daughter.