Don Carlos Arias Navarro, 1st Marquis of Arias-Navarro, Grandee of Spain (11 December 1908 – 27 November 1989) was one of the best known Spanish politicians during the dictatorship of General Francisco Franco.

Although recycled as a moderate leader in the last phase of Francoism and the beginning of the transition to democracy, Carlos Arias Navarro was in fact a hard-line politician who had been involved in the White Terror, signing thousands of death warrants at the time of the dismantling of the Spanish Republic.[1] 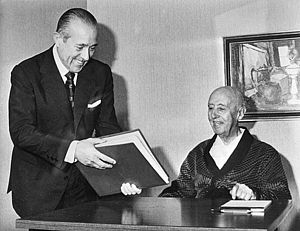 Carlos Arias Navarro and Franco in 1975

He served in the Ministry of Justice since 1929 as attorney in Málaga and Madrid. Arias was close to the right-wing sectors and joined the Francoist side during the Spanish Civil War. He was public prosecutor in the trials set up by the triumphant rightists in Málaga[2] after the Conquest of the city. There he earned the nickname "The Butcher of Málaga" (Carnicero de Málaga)[3] for his role in the imposition of the death penalty to true or perceived sympathizers of the Republican side,[4] in one of the harshest repressions following Francoist victory with an estimated total of 17,000 people summarily executed.[5][6][7]

After serving in various positions, including Mayor of Madrid from 1965 to June 1973, Arias became Minister of Governance in June 1973. After the assassination of the Prime Minister (Presidente del Gobierno) Luis Carrero Blanco he was appointed to that office as the 71st on 31 December 1973, a position he continued to hold after the death of Franco. Carlos Arias Navarro had the support of the Franco family, most notably Carmen Polo, and retained the post during the transition to democracy. However, the garroting of the Catalan anarchist Salvador Puig Antich in March 1974 had already shown his aversion to political liberalization, while other events, including the executions in September 1974, the organization of the Green March in November 1975 by King Hassan II of Morocco, and the illness and death of Franco (which Arias announced on television), displayed his weaknesses and further eroded his authority.

Franco's successor as head of state, King Juan Carlos I, continued his appointment, so that it was his government (which included Manuel Fraga Iribarne and José María de Areilza) that instituted the first reforms, however unwillingly. He tried to continue Franco's late policies, opposing any change. After a lengthy power struggle, this led to his dismissal by Juan Carlos I, with Arias resigning on 1 July 1976.

The next day, he was granted the hereditary title of marqués de Arias Navarro (English: Marquis of Arias Navarro), together with the dignity Grande de España (English: Grandee of Spain). Since he had no heirs, his title became extinct after he died.

Arias was succeeded by Adolfo Suárez, named general secretary of the Francoist official party Movimiento Nacional in December 1975. In June 1977, during the first free general elections held since 1936, Arias integrated the Alianza Popular, a right-wing party created by Manuel Fraga. He then led the Búnker group of hard-liners opposed to any reforms, along with the leader of the Francoist party Fuerza Nueva, Blas Piñar. Arias, however, never again occupied a relevant position in the later Spanish government.

Both left and extreme right attacked him, calling him by the nickname "The Old Pusillanimous".

In his first democratic election the party joined Popular Alliance (AP), led by Manuel Fraga, being senate candidate Madrid, but was not elected. He died on 27 November 1989 when he was 80 years of age, and was buried at the cemetery of El Pardo. His wife died in 1997.

According to the Spanish daily El País,[9] files released by the US National Archives and Records Administration show that, following the left-wing Carnation Revolution coup in Portugal on 25 April 1974, Arias met with the United States Deputy Secretary of State Robert S. Ingersoll in March 1975 and offered to invade Portugal in order to stop the spread of Communism. The report Ingersoll forwarded to the then-Secretary of State, Henry Kissinger, on 18 March, stated that "appropriate steps" were being taken to ensure that "the events in Portugal did not cross the border into Spain."