Carneades (/kɑːrˈniːədiːz/; Greek: Καρνεάδης, Karneadēs, "of Carnea"; 214/3–129/8 BC[1]) was an Academic skeptic born in Cyrene. By the year 159 BC, he had started to refute all previous dogmatic doctrines, especially Stoicism, and even the Epicureans whom previous skeptics had spared. As head of the Academy, he was one of three philosophers sent to Rome in 155 BC where his lectures on the uncertainty of justice caused consternation among the leading politicians. He left no writings and many of his opinions are known only via his successor Clitomachus. He seems to have doubted the ability, not just of the senses but of reason too, in acquiring truth. His skepticism was, however, moderated by the belief that we can, nevertheless, ascertain probabilities of truth, to enable us to live and act correctly.

Carneades, the son of Epicomus or Philocomiis, was born at Cyrene, North Africa in 214/213 BC. He migrated early to Athens, and attended the lectures of the Stoics, and learned their logic from Diogenes. He studied the works of Chrysippus, and exerted his energy of a very acute and original mind in their refutation.

He attached himself to the Academy, which had suffered from the attacks of the Stoics; and on the death of Hegesinus, he was chosen to preside at the meetings of Academy, and was the fourth in succession from Arcesilaus. His great eloquence and skill in argument revived the glories of his school; and, defending himself in the negative vacancy of asserting nothing (not even that nothing can be asserted), carried on a vigorous war against every position that had been maintained by other sects.

In the year 155 BC, when he was fifty-eight years old, he was chosen with Diogenes the Stoic and Critolaus the Peripatetic to go as ambassador to Rome to deprecate the fine of 500 talents which had been imposed on the Athenians for the destruction of Oropus. During his stay at Rome, he attracted great notice from his eloquent speeches on philosophical subjects, and it was here that, in the presence of Cato the Elder, he delivered his several orations on Justice. The first oration was in commendation of the virtue of Roman justice, and the next day the second was delivered, in which all the arguments he'd made on the first were refuted, as he persuasively attempted to prove that justice was inevitably problematic, and not a given when it came to virtue, but merely a compact device deemed necessary for the maintenance of a well-ordered society. Recognizing the potential danger of the argument, Cato was shocked at this and he moved the Roman Senate to send the philosopher home to his school, and prevent the Roman youth from the threat of re-examining all Roman doctrines. Carneades lived twenty-seven years after this at Athens.

Carneades is described as a man of unwearied industry. He was so engrossed in his studies, that he let his hair and nails grow to an immoderate length, and was so absent at his own table (for he would never dine out), that his servant and concubine, Melissa, was constantly obliged to feed him. Latin writer and author Valerius Maximus, to whom we owe the last anecdote, tells us that Carneades, before discussing with Chrysippus, was wont to purge himself with hellebore, to have a sharper mind.[3] In his old age, he suffered from cataract in his eyes, which he bore with great impatience, and was so little resigned to the decay of nature, that he used to ask angrily, if this was the way in which nature undid what she had done, and sometimes expressed a wish to poison himself.[citation needed] 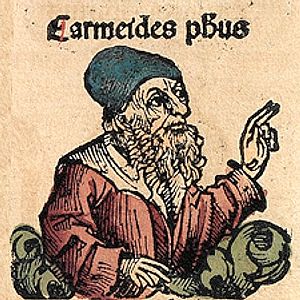 Carneades, depicted as a medieval scholar in the Nuremberg Chronicle, where he is called "Carmeides".[4]

Carneades left no writings, and all that is known of his lectures is derived from his intimate friend and pupil, Clitomachus; but so true was he to his own principles of withholding assent, that Clitomachus confesses he never could ascertain what his master really thought on any subject.[citation needed] In ethics, which more particularly were the subject of his long and laborious study, he seems to have denied the conformity of the moral ideas with nature. This he particularly insisted on in the second oration on Justice, in which he manifestly wished to convey his own notions on the subject; and he there maintains that ideas of justice are not derived from nature, but that they are purely artificial for purposes of expediency.[citation needed]

All this, however, was nothing but the special application of his general theory, that people did not possess, and never could possess, any criterion of truth.

Carneades argued that, if there were a criterion, it must exist either in reason (logos), or sensation (aisthêsis), or conception (phantasia). But then reason itself depends on conception, and this again on sensation; and we have no means of judging whether our sensations are true or false, whether they correspond to the objects that produce them, or carry wrong impressions to the mind, producing false conceptions and ideas, and leading reason also into error. Therefore, sensation, conception, and reason, are alike disqualified for being the criterion of truth.[citation needed]

But after all, people must live and act, and must have some rule of practical life; therefore, although it is impossible to pronounce anything as absolutely true, we may yet establish probabilities of various degrees. For, although we cannot say that any given conception or sensation is in itself true, yet some sensations appear to us more true than others, and we must be guided by that which seems the most true. Again, sensations are not single, but generally combined with others, which either confirm or contradict them; and the greater this combination the greater is the probability of that being true which the rest combine to confirm; and the case in which the greatest number of conceptions, each in themselves apparently most true, should combine to affirm that which also in itself appears most true, would present to Carneades the highest probability, and his nearest approach to truth.[5]