From Infogalactic: the planetary knowledge core
Jump to: navigation, search
For other uses, see Carpathian (disambiguation).

The Carpathian Mountains or Carpathians are a range of mountains forming an arc roughly 1,500 km (932 mi) long across Central Europe, making them the second-longest mountain range in Europe (after the Scandinavian Mountains, 1,700 km (1,056 mi)). They provide the habitat for the largest European populations of brown bears, wolves, chamois and lynxes, with the highest concentration in Romania,[2][3][4] as well as over one third of all European plant species.[5] The Carpathians and their foothills also have many thermal and mineral waters, with Romania having one-third of the European total.[6][7] Romania is likewise home to the largest surface of virgin forests in Europe (excluding Russia), totaling 250,000 hectares (65%), most of them in the Carpathians,[8] with the Southern Carpathians constituting Europe’s largest unfragmented forested area.[9]

The Carpathians consist of a chain of mountain ranges that stretch in an arc from the Czech Republic (3%) in the northwest through Slovakia (17%), Poland (10%), Hungary (4%) and Ukraine (11%) to Romania (53%) in the east and on to the Iron Gates on the River Danube between Romania and Serbia (2%) in the south. The highest range within the Carpathians is the Tatras, on the border of Slovakia and Poland, where the highest peaks exceed 2,600 m (8,530 ft). The second-highest range is the Southern Carpathians in Romania, where the highest peaks exceed 2,500 m (8,202 ft).

The most important cities in or near the Carpathians are: Bratislava and Košice in Slovakia; Kraków in Poland; Cluj-Napoca, Sibiu and Braşov in Romania; and Uzhhorod in Ukraine.

listen) in Romanian, Karpaten in German[citation needed] and Dutch,[citation needed] Kárpátok in Hungarian, Karpati in Serbian[citation needed] and Карпати in Bulgarian[citation needed].[10][11] Although the toponym was recorded already by Ptolemy in the 2nd century AD,[12] the modern form of the name is a neologism in most languages.[10] For instance, Havasok ("Snowy Mountains") was its medieval Hungarian name; Rus' and Romanian chronicles referred to it as "Hungarian Mountains". [11][10]Other sources, such as Dimitrie Cantemir and the Italian chronicler Giovanandrea Gromo, referred to the range as "Transylvania's Mountains", while the 17th century historian Constantin Cantacuzino translated the name of the mountains in an Italian-Romanian glossary to "Rumanian Mountains".[10] 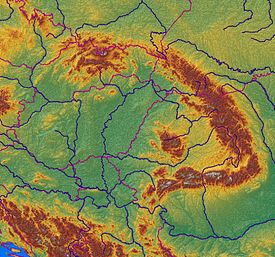 In the Scandinavian Hervarar saga, which relates ancient Germanic legends about battles between Goths and Huns, the name Karpates appears in the predictable Germanic form as Harvaða fjöllum (see Grimm's law).

The Carpathians begin on the Góra Świętego Marcina 384 m. in Tarnów - northern edge of Pogórze Ciężkowickie. They surround Transcarpathia and Transylvania in a large semicircle, sweeping towards the southeast, and end on the Danube near Orşova in Romania. The total length of the Carpathians is over 1,500 km (932 mi) and the mountain chain's width varies between 12 and 500 km (7 and 311 mi). The highest altitudes of the Carpathians occur where they are widest. The system attains its greatest breadth in the Transylvanian plateau and in the south of the Tatra group – the highest range, in which Gerlachovský štít in Slovakia is the highest peak at 2,655 m (8,711 ft) above sea level. The Carpathians cover an area of 190,000 km2 (73,359 sq mi) and, after the Alps, form the next most extensive mountain system in Europe.

Although commonly referred to as a mountain chain, the Carpathians do not actually form an uninterrupted chain of mountains. Rather, they consist of several orographically and geologically distinctive groups, presenting as great a structural variety as the Alps. The Carpathians, which attain an altitude of over 2,500 m (8,202 ft) in only a few places, lack the bold peaks, extensive snowfields, large glaciers, high waterfalls, and numerous large lakes that are common in the Alps. It was believed that no area of the Carpathian range was covered in snow all year round and there were no glaciers, but recent research by Polish scientists discovered one permafrost and glacial area in the Tatra Mountains.[14] The Carpathians at their highest altitude are only as high as the middle region of the Alps, with which they share a common appearance, climate, and flora. The Carpathians are separated from the Alps by the Danube. The two ranges meet at only one point: the Leitha Mountains at Bratislava. The river also separates them from the Balkan Mountains at Orşova in Romania. The valley of the March and Oder separates the Carpathians from the Silesian and Moravian chains, which belong to the middle wing of the great Central Mountain System of Europe. Unlike the other wings of the system, the Carpathians, which form the watershed between the northern seas and the Black Sea, are surrounded on all sides by plains, namely the Pannonian plain to the southwest, the plain of the Lower Danube (Romania) to the south, and the Galician plain to the northeast.

Important cities and towns in or near the Carpathians are, in approximate descending order of population:

This is an (incomplete) list of the highest peaks of the Carpathians (limited to summits over 2,500 m), their heights, geologic divisions and locations.

This is a list of the highest national peaks of the Carpathians, their heights, geologic divisions, and locations. 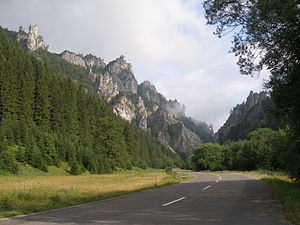 The external, generally northern, portion of the orogenic belt is a Tertiary accretionary prism of a so-called Flysch belt created by rocks scraped off the sea bottom and thrust over the North-European plate. The Carpathian accretionary wedge is made of several thin skinned nappes composed of Cretaceous to Paleogene turbidites. Thrusting of the Flysch nappes over the Carpathian foreland caused the formation of the Carpathian foreland basin.[17] The boundary between the Flysch belt and internal zones of the orogenic belt in the western segment of the mountain range is marked by the Pieniny Klippen Belt, a narrow complicated zone of polyphase compressional deformation, later involved in a supposed strike-slip zone.[18] Internal zones in western and eastern segments contain older Variscan igneous massifs reworked in Mesozoic thick and thin-skinned nappes. During the Middle Miocene this zone was affected by intensive calc-alkaline[19] arc volcanism that developed over the subduction zone of the flysch basins. At the same time, the internal zones of the orogenic belt were affected by large extensional structure[20] of the back-arc Pannonian Basin.[21]

Iron, gold and silver were found in great quantities in the Western Carpathians. After the Roman emperor Trajan's conquest of Dacia, he brought back to Rome over 165 tons of gold and 330 tons of silver.[22]

Divisions of the Carpathians 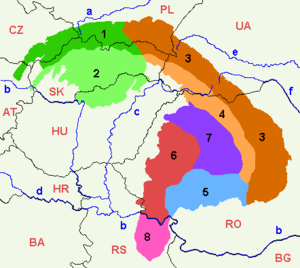 The largest range is the Tatras.

A major part of the western and northeastern Outer Carpathians in Poland, Ukraine and Slovakia is traditionally called the Beskids.

The geological border between the Western and Eastern Carpathians runs approximately along the line (south to north) between the towns of Michalovce, Bardejov, Nowy Sącz and Tarnów. In older systems the border runs more in the east, along the line (north to south) along the rivers San and Osława (Poland), the town of Snina (Slovakia) and river Tur'ia (Ukraine). Biologists, however, shift the border even further to the east.

The border between the eastern and southern Carpathians is formed by the Predeal Pass, south of Braşov and the Prahova Valley.

Ukrainians sometimes denote as "Eastern Carpathians" only the Ukrainian Carpathians (or Wooded Carpathians), meaning the part situated largely on their territory (i.e., to the north of the Prislop Pass), while Romanians sometimes denote as "Eastern (Oriental) Carpathians" only the part which lies on their territory (i.e., from the Ukrainian border or from the Prislop Pass to the south), which they subdivide into three simplified geographical groups (north, center, south), instead of Outer and Inner Eastern Carpathians. These are: 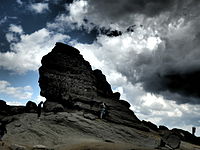 The Sphinx in Bucegi Mountains, Romania 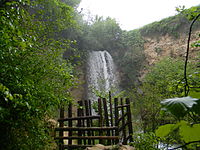 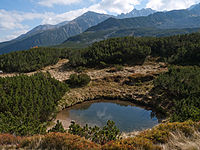 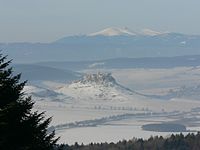 View of Spiš Castle in Slovakia, from the Branisko Pass 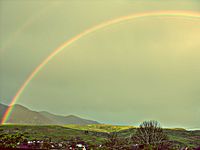 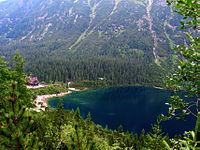 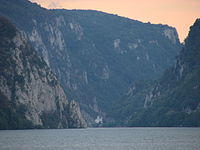 Iron Gates at the Serbian-Romanian border