Carpe diem is a Latin aphorism, usually translated "seize the day", taken from book 1 of the Roman poet Horace's work Odes (23 BC).

Carpe is the second-person singular present active imperative of carpō "pick or pluck" used by Horace to mean "enjoy, seize, use, make use of".[1] Diem is the accusative case of the noun dies "day". A more literal translation of "carpe diem" would thus be "pluck the day [as it is ripe]"—i.e., enjoy the moment.

Perhaps the first written expression of the concept is the advice given by Siduri to Gilgamesh, telling him to forgo his mourning and embrace life although some scholars see it as simply urging Gilgamesh to abandon his mourning, "reversing the liminal rituals of mourning and returning to the normal and normative behaviors of Mesopotamian society."[3][4]

In Horace, the phrase is part of the longer "carpe diem, quam minimum credula postero", which can be translated as "Seize the day, put very little trust in tomorrow (the future)". The ode says that the future is unforeseen and that one should not leave to chance future happenings, but rather one should do all one can today to make one's future better. This phrase is usually understood against Horace's Epicurean background.[5] The meaning of "carpe diem" as used by Horace is not to ignore the future, but rather not to trust that everything is going to fall into place for you and taking action for the future today.[6] 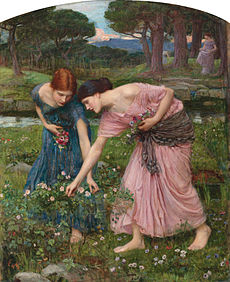 "Collige, virgo, rosas" ("gather, girl, the roses") appears at the end of the poem "De rosis nascentibus"[7] ("Of growing roses", also called Idyllium de rosis) attributed to Ausonius or Virgil. It encourages youth to enjoy life before it is too late; compare "Gather ye rosebuds while ye may" from "To the Virgins, to Make Much of Time".

De Brevitate Vitae ("On the Shortness of Life"), often referred to as Gaudeamus igitur, ("Let us rejoice") is a popular academic commercium song, on taking joy in student life, with the knowledge that one will someday die. It is medieval Latin, dating to 1287.

Related but distinct is the expression "memento mori" ("remember that you are mortal") which carries some of the same connotation as "carpe diem". For Horace, mindfulness of our own mortality is key in making us realize the importance of the moment. "Remember that you are mortal, so seize the day." Over time the phrase "memento mori" also came to be associated with penitence, as suggested in many vanitas paintings. Today many listeners will take the two phrases as representing almost opposite approaches, with "carpe diem" urging us to savour life and "memento mori" urging us to resist its allure. This is not the original sense of the "memento mori" phrase as used by Horace.

File:Dorfkirche Albersdorf Thüringen.jpg
A German version of "carpe diem" (Nutze die Zeit) on the face of a turret clock in Germany

The American progressive metal band Dream Theater released the 23-minute epic "A Change of Seasons" on their 1995 album of the same name. The song numerously references the "carpe diem" or "Seize the Day" aphorism as part of its storyline. The song also includes audio samples from the 1989 film Dead Poets Society and quotes from the 1648 Robert Herrick poem, "To the Virgins, to Make Much of Time", all of which are conceived surrounding the concept of "carpe diem".

In the film Poseidon (2006) Richard Dreyfuss at 13:06 toasts his fellow travelers with "Carpe diem, my friend. Carpe diem. There was no work crisis."

The soundtrack to the 2011 animated film Phineas and Ferb the Movie: Across the 2nd Dimension includes a track called "Carpe Diem".

A song and single of the album Chokmah by the German singer Nena is called "Carpe Diem".

It is also the motto of Marden High School.

It is also the motto of École Mission Senior Secondary School.

It is also the motto of Mother Teresa Catholic Secondary School.

In season 1 of the animated show "Gravity Falls", there is an episode titled "Carpet Diem".