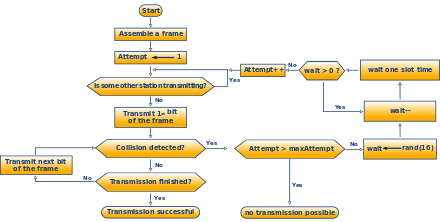 Simplified Algorithm of CSMA/CD. Station checks if another station is transmitting, if not it sends the first bit of information. If no collision is detected it will continue to send the other bits of information while continuously checking if a collision has been detected. If a collision is detected it will calculate a random amount of time to wait and start the process again. If the maximum amount of attempts is reached then no transmission is possible and it will be aborted.

Carrier sense multiple access with collision detection (CSMA/CD) is a media access control method used most notably in local area networking using early Ethernet technology. It uses a carrier sensing scheme in which a transmitting data station detects other signals while transmitting a frame, and stops transmitting that frame, transmits a jam signal, and then waits for a random time interval before trying to resend the frame.[1]

CSMA/CD is a modification of pure carrier sense multiple access (CSMA). CSMA/CD is used to improve CSMA performance by terminating transmission as soon as a collision is detected, thus shortening the time required before a retry can be attempted.

This can be likened to what happens at a dinner party, where all the guests talk to each other through a common medium (the air). Before speaking, each guest politely waits for the current speaker to finish. If two guests start speaking at the same time, both stop and wait for short, random periods of time (in Ethernet, this time is measured in microseconds). The hope is that by each choosing a random period of time, both guests will not choose the same time to try to speak again, thus avoiding another collision.

Methods for collision detection are media dependent, but on an electrical bus such as 10BASE5 or 10BASE2, collisions can be detected by comparing transmitted data with received data or by recognizing a higher than normal signal amplitude on the bus.

The jam signal or jamming signal is a signal that carries a 32-bit binary pattern sent by a data station to inform the other stations of the collision and that they must not transmit.[3]

This in turn means: A station noting a collision has occurred is sending a 4 to 6 byte long pattern composed of 16 1-0 bit combinations. Note: The size of this jam signal is clearly beyond the minimum allowed frame-size of 64 bytes.

The purpose of this is to ensure that any other node which may currently be receiving a frame will receive the jam signal in place of the correct 32-bit MAC CRC, this causes the other receivers to discard the frame due to a CRC error.

As a correctly set up CSMA/CD network link should not have late collisions, the usual possible causes are full-duplex/half-duplex mismatch, exceeded Ethernet cable length limits, or defective hardware such as incorrect cabling, non-compliant number of hubs in the network, or a bad NIC.

CSMA/CD was used in now obsolete shared media Ethernet variants (10BASE5, 10BASE2) and in the early versions of twisted-pair Ethernet which used repeater hubs. Modern Ethernet networks, built with switches and full-duplex connections, no longer need to utilize CSMA/CD because each Ethernet segment, or collision domain, is now isolated. CSMA/CD is still supported for backwards compatibility and for half-duplex connections. IEEE Std 802.3, which defines all Ethernet variants, for historical reasons still bears the title "Carrier sense multiple access with collision detection (CSMA/CD) access method and physical layer specifications".