From Infogalactic: the planetary knowledge core
Jump to: navigation, search
For other uses, see Cart (disambiguation). 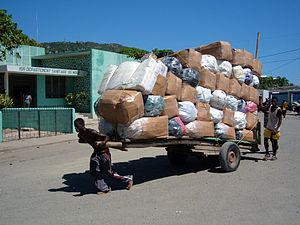 A cart is a vehicle designed for transport, using two wheels and normally pulled by one or a pair of draught animals. A handcart is pulled or pushed by one or more people. It is different from a dray or wagon, which is a heavy transport vehicle with four wheels and typically two or more horses, or a carriage, which is used exclusively for transporting humans.

Over time, the term "cart" has come to mean nearly any small conveyance, from shopping carts to golf carts, without regard to number of wheels, load carried, or means of propulsion.

The draught animals used for carts may be horses or ponies, mules, oxen, water buffalo or donkeys, or even smaller animals such as goats or large dogs.

Carts have been mentioned in literature as far back as the second millennium B.C. The Indian sacred book Rigveda states that men and women are as equal as two wheels of a cart. Hand-carts pushed by humans have been used around the world. In the 19th century, for instance, some Mormons travelling across the plains of the United States between 1856 and 1860 used handcarts.[1]

Carts were often used for judicial punishments, both to transport the condemned – a public humiliation in itself (in Ancient Rome defeated leaders were often carried in the victorious general's triumph) – and even, in England until its substitution by the whipping post under Queen Elizabeth I, to tie the condemned to the cart-tail and administer him or her a public whipping.

Larger carts may be drawn by animals, such as horses, mules, or oxen. They have been in continuous use since the invention of the wheel, in the 4th millennium BC. Carts may be named for the animal that pulls them, such as horsecart or oxcart. In modern times, horsecarts are used in competition while draft horse showing. A dogcart, however, is usually a cart designed to carry hunting dogs: an open cart with two cross-seats back to back; the dogs could be penned between the rear-facing seat and the back end.

The term " cart " (synonymous in this sense with chair) is also used for various kinds of lightweight, two-wheeled carriages, some of them sprung carts (or spring carts), especially those used as open pleasure or sporting vehicles. They could be drawn by a horse, pony or dog. Examples include: 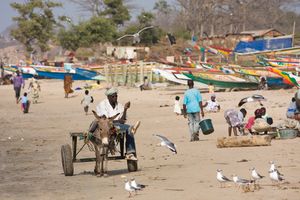 A donkey cart used in the Gambia 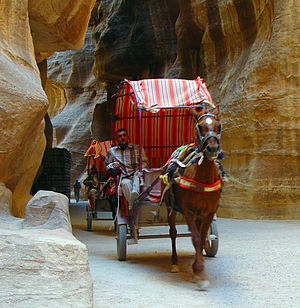 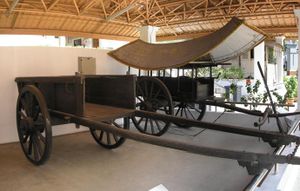 Carts from different Malay regions, exhibited at the Muzium Negara.

The builder of a cart may be known as a cartwright; the surname "Carter" also derives from the occupation of transporting goods by cart or wagon. 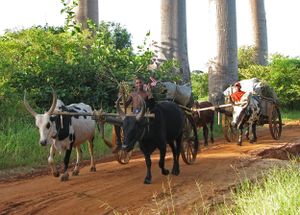 Carts have many different shapes, but the basic idea of transporting material (or maintaining a collection of materials in a portable fashion) remains. Carts may have a pair of shafts, one along each side of the draught animal that supports the forward-balanced load in the cart. The shafts are supported by a saddle on the horse. Alternatively (and normally where the animals are oxen or buffalo), the cart may have a single pole between a pair of animals. The draught traces attach to the axle of the vehicle or to the shafts. The traces are attached to a collar (on horses), to a yoke (on other heavy draught animals) or to a harness on dogs or other light animals.

The dray is often associated with the transport of barrels, particularly of beer.

Of the cart types not animal-drawn, perhaps the most common example today is the shopping cart (British English: shopping trolley), which has also come to have a metaphorical meaning in relation to online purchases (here, British English uses the metaphor of the shopping basket). Shopping carts first made their appearance in Oklahoma City in 1937.

In golf, both manual push or pull and electric golf trolleys are designed to carry a golfers bag, clubs and other equipment. Also, the golf cart, car, or buggy, is a powered vehicle that carries golfers and their equipment around a golf course faster and with less effort than walking.

A Porter's trolley is a type of small, hand-propelled wheeled platform. This can also be called a baggage cart. since the 13th century.[citation needed]

Autocarts are a type of small, hand-propelled wheeled utility carts having a pivoting base for collapsible storage in vehicles. They eliminate the need for plastic or paper shopping bags and are also used by tradespersons to carry tools, equipment or supplies.

A soap-box cart (also known as a Billy Cart, Go-Cart, Trolley etc.) is a popular children's construction project on wheels, usually pedaled, but also intended for a test race.

The term "Go-Kart", which exists since 1959, also shortened as "Kart", an alternative spelling of "cart", refers to a tiny race car with frame and two-stroke engine; the old term go-cart originally meant a sedan chair or an infant walker