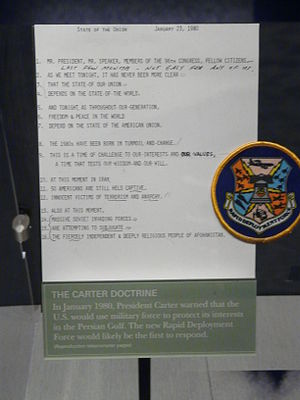 A document related to the Carter Doctrine

The Carter Doctrine was a policy proclaimed by President of the United States Jimmy Carter in his State of the Union Address on January 23, 1980, which stated that the United States would use military force if necessary to defend its national interests in the Persian Gulf.

It was a response to the Soviet Union's intervention of Afghanistan in 1979, and was intended to deter the Soviet Union—the United States' Cold War adversary—from seeking hegemony in the Gulf.

Brzezinski modeled the wording on the Truman Doctrine,[1] and insisted that the sentence be included in the speech "to make it very clear that the Soviets should stay away from the Persian Gulf".[2]

In The Prize: The Epic Quest for Oil, Money, and Power, author Daniel Yergin notes that the Carter Doctrine "bore striking similarities" to a 1903 British declaration, in which British Foreign Secretary Lord Landsdowne warned Russia and Germany that the British would "regard the establishment of a naval base or of a fortified port in the Persian Gulf by any other power as a very grave menace to British interests, and we should certainly resist it with all the means at our disposal".[3]

The Persian Gulf region was first proclaimed to be of national interest to the United States during World War II. Petroleum is of central importance to modern armies, and the United States—as the world's leading oil producer at that time—supplied most of the oil for the Allied armies. Many American strategists were concerned that the war would dangerously reduce the U.S. oil supply, and so they sought to establish good relations with Saudi Arabia, a kingdom with large oil reserves. On February 16, 1943, President Franklin D. Roosevelt said, "the defense of Saudi Arabia is vital to the defense of the United States".[4]

On February 14, 1945, while returning from the Yalta Conference, Roosevelt met with Saudi Arabia's King Ibn Saud on the Great Bitter Lake in the Suez Canal, the first time a U.S. president had visited the Persian Gulf region. (During Operation Desert Shield in 1990, U.S. Defense Secretary Dick Cheney cited this landmark meeting between Roosevelt and King Ibn Saud as one of the justifications for sending troops to protect Saudi Arabia's border.)[5]

The Persian Gulf region continued to be regarded as an area of vital importance to the United States during the Cold War. Three Cold War United States presidential doctrines—the Truman, Eisenhower, and Nixon doctrines—played roles in the Carter Doctrine's formulation. The Truman Doctrine, which stated that the United States would send military aid to countries which were threatened by Soviet communism, was used to strengthen the security of Iran and Saudi Arabia. In October 1950, President Harry Truman wrote to King Ibn Saud that "the United States is interested in the preservation of the independence and territorial integrity of Saudi Arabia. No threat to your Kingdom could occur which would not be a matter of immediate concern to the United States".[6]

The Eisenhower Doctrine in turn called for U.S. troops to be sent to the Middle East to defend U.S. allies against their Soviet-backed adversaries. Finally, the Nixon Doctrine's application provided military aid to Iran and Saudi Arabia so that these U.S. allies could ensure peace and stability in the region. In 1979, the Iranian Revolution and the Soviet intervention of Afghanistan prompted the restatement of U.S. interests in the region in the form of the Carter Doctrine.[7]

In July 1979, in response to a national energy crisis, President Carter delivered his "Crisis of Confidence" speech urging Americans to reduce their energy use to help lessen American dependence on foreign oil supplies.[8] Recently, some scholars have questioned whether Carter's energy plan, if it had been fully enacted, would have prevented some of the current economic difficulties caused by American dependency on foreign oil.[9]

President Carter in his State of the Union Address on January 23, 1980, after stating that Soviet troops in Afghanistan posed "a grave threat to the free movement of Middle East oil", proclaimed:

The region which is now threatened by Soviet troops in Afghanistan is of great strategic importance: It contains more than two-thirds of the world's exportable oil. The Soviet effort to dominate Afghanistan has brought Soviet military forces to within 300 miles of the Indian Ocean and close to the Straits of Hormuz, a waterway through which most of the world's oil must flow. The Soviet Union is now attempting to consolidate a strategic position, therefore, that poses a grave threat to the free movement of Middle East oil.

This situation demands careful thought, steady nerves, and resolute action, not only for this year but for many years to come. It demands collective efforts to meet this new threat to security in the Persian Gulf and in Southwest Asia. It demands the participation of all those who rely on oil from the Middle East and who are concerned with global peace and stability. And it demands consultation and close cooperation with countries in the area which might be threatened.

Meeting this challenge will take national will, diplomatic and political wisdom, economic sacrifice, and, of course, military capability. We must call on the best that is in us to preserve the security of this crucial region.

Because the United States did not have significant military capabilities in the Persian Gulf region at the time the Carter Doctrine was proclaimed, the doctrine was criticized[who?] for not being backed by sufficient force. The Carter administration began to build up the Rapid Deployment Force (which would eventually become CENTCOM). In the interim, the administration expanded the U.S. naval presence in the Persian Gulf and the Indian Ocean.[citation needed]

Carter's successor, Ronald Reagan, extended the policy in October 1981 with what is sometimes called the "Reagan Corollary to the Carter Doctrine", which proclaimed that the United States would intervene to protect Saudi Arabia, whose security was threatened after the Iran–Iraq War's outbreak. Thus, while the Carter Doctrine warned away outside forces from the region, the Reagan Corollary pledged to secure internal stability. According to diplomat Howard Teicher, "with the enunciation of the Reagan Corollary, the policy ground work was laid for Operation Desert Storm".[10]