Case Western Reserve University School of Law is one of eight schools at Case Western Reserve University in Cleveland, Ohio. The law school is known for its innovation in legal education and blending of practice, theory, and professionalism. It has a long commitment to diversity and admitted students of color in its first entering class in 1892. It was one of the first schools accredited by the American Bar Association[1] and it is a member of the Association of American Law Schools (AALS).[2]

It was initially named for Franklin Thomas Backus, a justice of the Ohio Supreme Court, whose widow donated $50,000 to found the school in 1892.[3] 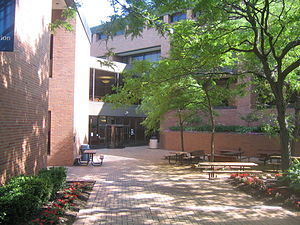 U.S. News & World Report has ranked Case's Juris Doctor program at 59th in the nation in 2015. Its health law program is 9th in the nation, and international law is #11.[5] In addition to the JD curriculum, the law school offers LLM and SJD degrees to lawyers around the world.

Employment reports indicate that 91% of the Class of 2013 were employed or enrolled in an advanced degree program nine months after graduation. This represents a 5-percentage point jump since the year before. Of those who were employed, 83% were employed in bar-required positions.

In August 2013, by a near-unanimous vote, the faculty adopted a new curriculum to reflect changes in the legal industry. The model is designed to blend practice, theory, and professionalism in all three years of law school. Students begin working with clients in the first year of law school. Writing and skills courses track the content in their substantive courses to blend theory and practice. Students also learn transactional drafting, financial literacy, and statutory and regulatory analysis during the first year.

During the second year of law school, students specialize and continue to build on the skills they learned during their first year. The law school's well-known specialty areas are IP, health, international, and business law.

A Capstone semester is the hallmark of the third year. All students will practice law full-time by working on cases through the Milton A. Kramer Law Clinic Center at the law school. Students may also practice law through an externship in the U.S. and abroad, or they may choose to spend their third year in Europe, completing a foreign LLM degree in addition to their Case JD, at no additional cost.

Students learn leadership through courses developed by faculty at Weatherhead School of Management, and students graduate with e-portfolios of their work to share with employers. 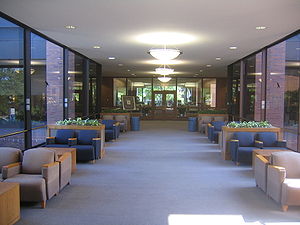 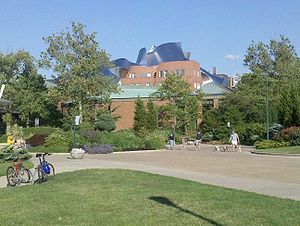 Gund Hall with Peter B. Lewis building in the background

As of Fall 2015, total student enrollment at Case Western Reserve University School of Law has dropped approximately 36% since 2010, as the university holds admission standards amidst a nationwide drop in prospective students taking the Law School Admissions Test (LSAT) and applying to law schools. As of Fall 2015, total J.D. student enrollment is 383 students, including 124 first year law students. [7]

Case Western Reserve's Law School Transparency under-employment score is 27.2%, indicating the percentage of the Class of 2013 unemployed, pursuing an additional degree, or working in a non-professional, short-term, or part-time job nine months after graduation.[9] 88.8% of the Class of 2013 was employed in some capacity while 2.6% were pursuing graduate degrees and 8.6% were unemployed nine months graduation.[4]

Ohio was the primary employment destination for 2013 Case Western Reserve graduates, with 56.8% of employed graduates working in the state.[4][3] The next two most popular locations for Case Western graduates to accept employment were Washington, DC and New York. In addition, seven graduates from the class of 2013 accepted positions abroad.[10]

The total cost of attendance (indicating the cost of tuition, fees, and living expenses) at Case Western Reserve for the 2014-2015 academic year is $69,112.[11] Case Western Reserve's tuition and fees on average increased by 4.89% annually over the past five years.[12]

Members of the federal bench who are Case Western alumni include Kathleen M. O'Malley of the United States Court of Appeals for the Federal Circuit, and John J. McConnell, Jr. of the United States District Court for the District of Rhode Island. Both were appointed to their current positions by President Barack Obama. Associate Justice John Hessin Clarke of the United States Supreme Court was educated at Case when the school was known as Western Reserve College.

Other Case alumni are the fields of government, business, academia, and the judiciary.