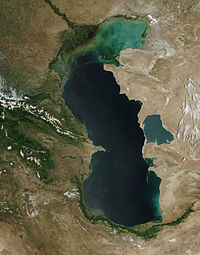 The Caspian Flotilla (Russian: Каспийская флотилия, tr. Kaspiyskaya flotiliya) is the oldest Russian military flotilla, stationed in the Caspian Sea. It was awarded the Order of the Red Banner in 1945.

The Caspian Flotilla (CF) was created in November 1722 in Astrakhan by the order of Peter the Great. Led by the admiral Fyodor Apraksin, it participated in Peter's Persian campaign of 1722–1723 and the Russo-Persian War (1804–1813), assisting the Russian army in capturing Derbent and Baku during the Persian Expedition of 1796. As a result of the Treaty of Gulistan of 1813, the CF remained the only military flotilla in the Caspian Sea. Baku became its main base in 1867.

As the situation on the Caspian Sea stabilized in due course, the number of ships in the CF began to decrease. By the beginning of the 20th century, it had two gunboats and a few armed steamers. The sailors of the CF were actively engaged in the revolutionary movement in Baku in 1903–1905 and establishment of the Soviet authority in 1917 in that region. In order to provide assistance to the Red Army, they formed the Military Fleet of the Astrakhan Region (Военный флот Астраханского края, or Voyenniy flot Astrakhanskogo kraya) in April – June 1918, reinforced with torpedo boats and submarines from the Baltic Sea in the fall of 1918. On October 13, the Soviets renamed it to the Astrakhan-Caspian Military Flotilla (Астрахано-Каспийская военная флотилия, or Astrakhano-Kaspiyskaya voennaya flotiliya). The ships of the flotilla were captured by the counterrevolutionary Centrocaspian Dictatorship in August 1918 and later regained by the Soviets after the overthrow of the Musavat government.

In July 1919, the Astrakhan-Caspian Military Flotilla was combined with the Volga Military Flotilla (Волжская военная флотилия, or Volzhskaya voyennaya flotiliya) and renamed to the Volga-Caspian Military Flotilla (Волжско-Каспийская военная флотилия). On May 1, 1920, the Soviets established the Caspian Fleet, which comprised three auxiliary cruisers, ten torpedo boats, four submarines and other ships. Together with the Caspian Fleet, there was the Red Fleet of the Soviet Azerbaijan, stationed in Baku, as well. Both fleets completed the conquest of the Caspian Sea from the White Army. In July 1920, Caspian and Azerbaijani fleets were combined into the Naval Forces of the Caspian Sea (Морские Силы Каспийского моря, or Morskiye Sily Kaspiyskogo morya) and would later be renamed to the Caspian Flotilla on June 27, 1931.

During the Great Patriotic War of 1941–1945, the Caspian Flotilla secured vital sea shipping of army units, military equipment and different cargo, especially during the Battle of Stalingrad and the battle for the Caucasus. (During the war, some of the Lend Lease were shipped to the USSR via the Persian Corridor and the Caspian Sea).

During the Cold War the Caspian was used to test missile armed ekranoplanes.

The Flotilla has now dropped in numbers, and the Kazakh contingent was removed to serve as a basis for Kazakhstan's naval service. For several years, Russia continued to lead a joint Turkmen-Russian force based at Astrakhan.

Among the Flotilla's units, from 2000, has been a new Naval Infantry brigade, the 77th, based at Kaspiysk. The headquarters and two battalions of the brigade were scheduled to be established by August 1, 2000.[1] It was reported by the AVN Military News Agency in June 2000 that the new brigade, which had inherited the lineage of the disbanded 77th Guards Motor Rifle Division, formerly with the Northern Fleet,[2] was to have its troops housed in Kaspiysk and Astrakhan and have as many as 195 combat vehicles and one Gepard class frigate sent to it from Chukotka and the Northern Fleet, respectively. The brigade was also to have helicopters added to it, according to the June 2000 report. The Brigade's full name was the 77th Detached Guards Moscow-Chernigov Order of Lenin, the Red Banner, Order of Suvorov Marine Brigade. It was disbanded in 2009.[3]

Also, the flotilla has received one of new Buyan-class stealth type river gunboats built by the St. Petersburg Almaz shipyard.[4][5]

On 13 and 23 November 2009, there were two separate sets of explosions at the 31st Arsenal of the Caspian Sea Flotilla, an ammunition depot, in Ulyanovsk. Ten servicemen died.[6][7] The depot was to be closed.

On 7 October 2015, Russia’s Defense Minister Sergey Shoigu announced that four Russian Navy warships in the Caspian Sea had fired a total of 26 Kalibr-class cruise missiles at the positions of the terrorist group ISIL in Syria.[8] 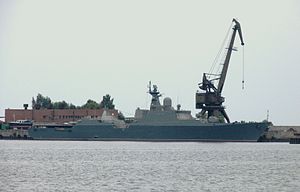 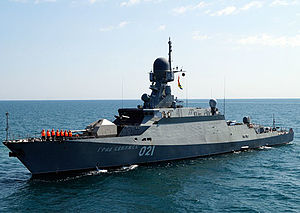 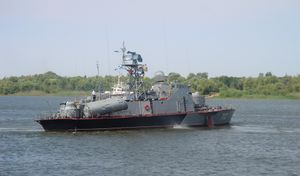 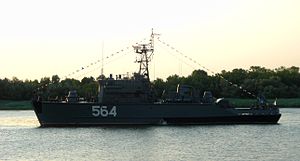